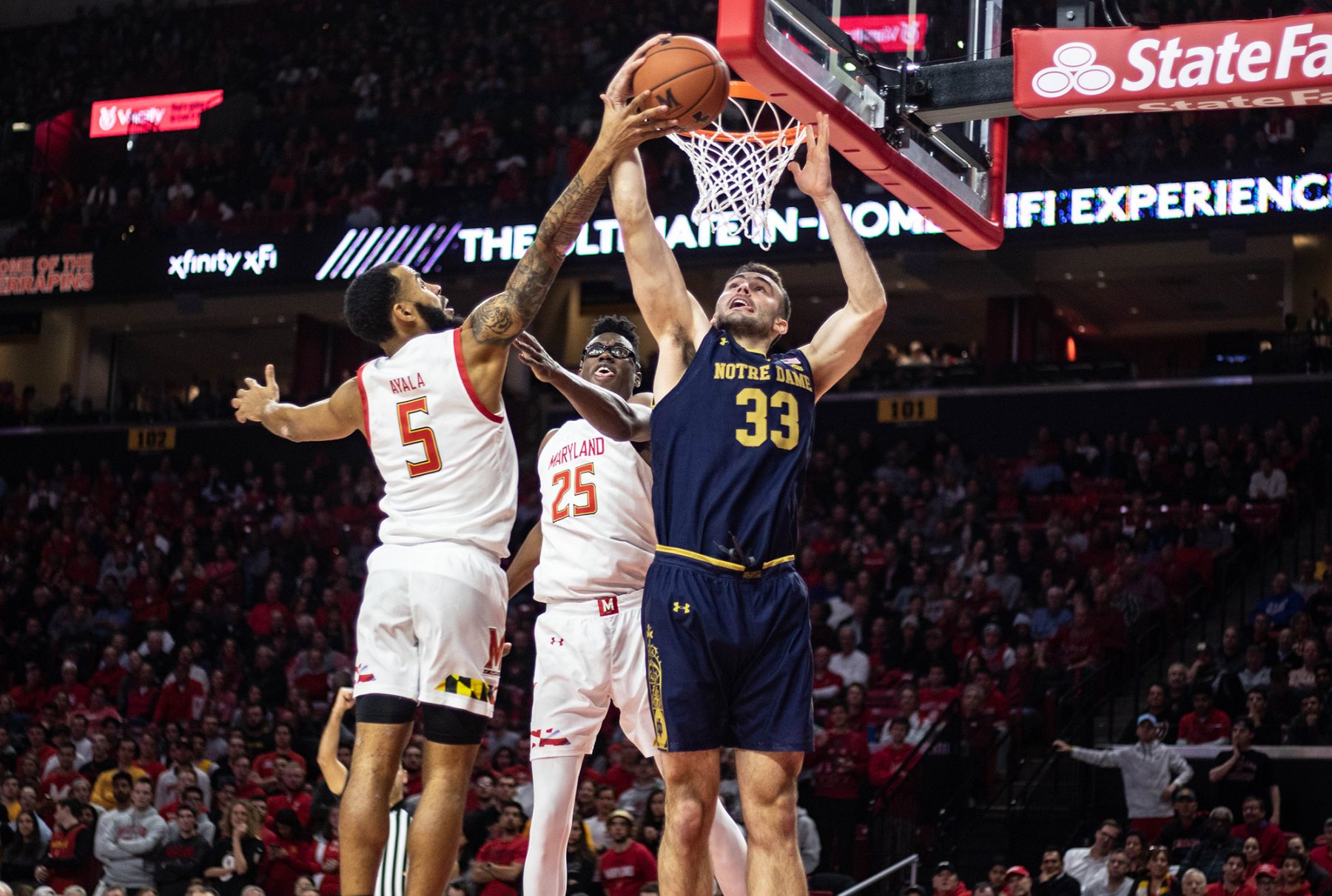 Before Mike Brey even reached the lectern Wednesday night, an apt reaction to the Maryland men’s basketball team escaped from the Notre Dame coach’s lips: “Wow.”

His team had just been run off the floor at the Xfinity Center in a 72-51 loss, held to 29 percent from the field. He had just witnessed what the No. 3 team in the country could do. Brey didn’t admonish his own team’s shortcomings; instead, he heaped praise on the Terps, who used a 21-7 run at the end of the first half to separate from the Fighting Irish.

It wasn’t so much the highlight-reel throw-downs — of which there were two — or the scoring bursts that have aided Maryland in its 9-0 start to the year.

“It was their defense,” Brey said.

It was the blocked shots, clean switching and hustle on loose balls. It was the hands in players’ faces, physicality down low and commitment to disrupting as many Notre Dame possessions as possible.

For the Terps, it’s the continuation of what’s been clear for nine games this year. Their offense — when it wakes up — has all the makings for a deep tournament run. But it’s that suffocating, stifling, suppressing defense that’s becoming the identity of coach Mark Turgeon’s team.

“It’s everything. It’s what we harp on all the time,” guard Darryl Morsell said. “It gets our offense going and it’s something we pride ourselves in.”

Midway through the first half Wednesday, guard Aaron Wiggins missed a three-point attempt. Guard Prentiss Hubb pulled in the defensive rebound and looked long, finding guard T.J. Gibbs in transition with only Maryland guard Eric Ayala between himself and the hoop.

Gibbs cut inside, rose up to the rim, released the ball — and saw it sent out of play by a flying Wiggins, who had sprinted back for the first of his three blocks. The next time, later in the opening period, Wiggins raced back and swatted Hubb’s attempt. He’d do it again to Gibbs in the second half, preventing another transition basket and showcasing his team’s defensive commitment.

“I feel like it’s started to become our identity,” Ayala said. “You know, we lock in defensively, our offense feeds off of that. We get out in transition, make plays and it’s fun.”

Maryland has allowed opponents to shoot just 39.2 percent from inside the arc, the eighth-best clip in the country. And on Wednesday, that shooting percentage dropped to 29.7 percent from two-point range.

The Fighting Irish suffered from scoring droughts throughout, but a five-minute stretch late in the first half without any points turned a two-point advantage into an eight-point deficit. The strong defense turned the tide in the Terps’ first ACC/Big Ten Challenge win in their last seven tries.

“They are hard to deal with; they even deflected a bunch of jump shots,” Brey said. “The jump shots we made I don’t even think were great looks. We have not played against anybody like that in a while, even in the ACC.”

For all of Maryland’s scorers — and there are a lot of them, with five players averaging over nine points per game — the defensive pressure may be the team’s calling card. It can create offensive chances in transition or slow the game down when Turgeon so chooses.

And on Wednesday night, as it has for much of the season, that defense overwhelmed another opponent.

“They smothered us,” Brey said. “It almost demoralizes you, playing against that.”