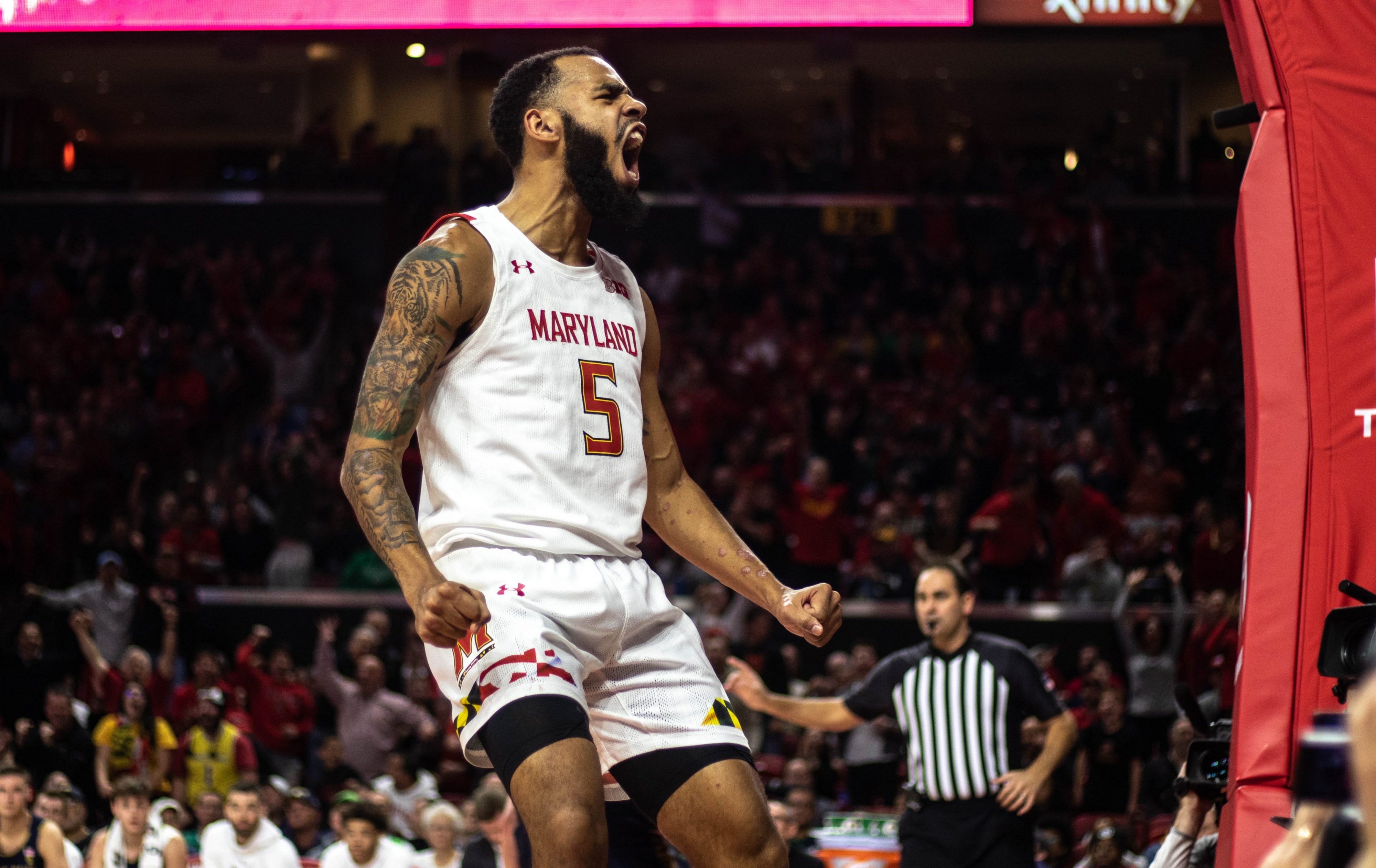 With one dunk as time expired in the first half, Maryland men’s basketball brought a once-tepid Xfinity Center crowd to their feet, hands over their mouths, eyes bugged out, almost not believing what they had just seen.

But there it was, repeated on the video board as the Terps spilled onto the floor after the buzzer sounded. And what was once another slow start — an all-too-familiar trend for this team through nine games — faded into the ether, out of sight and out of mind.

When both of Aaron Wiggins’ feet returned to the court, some 20 feet from where he’d stood mere seconds earlier, Maryland suddenly had a 12-point halftime lead, well on its way to a 72-51 victory Wednesday night against Notre Dame.

Wiggins had missed his 3-pointer but didn’t wait to watch it clank. Instead, he sprinted toward the rim, rose up into the air, caught the rebound with both hands and slammed it home. It was an exclamation point to end a furious run in the first half. The Terps scored 16 points in the final four minutes before intermission, the same amount they had managed in the previous 16 minutes.

“That’s something I do in video games,” guard Eric Ayala said. “I thought somebody else shot it and then he put it back. But for him to shoot it, then go get it, that was impressive.”

It’s so often been this way for Maryland, with more misses than makes in the early goings to leave a highly ranked team trailing deep into the first half. The trend remained true Wednesday, even after a commanding win over Marquette on Sunday at the Orlando Invitational.

The first 10 three-point attempts missed, and the team shot 4-for-19 overall — yet it trailed the Fighting Irish by just three points after 10 minutes of play. Notre Dame shot 8-for-28 in the opening 20 minutes, and Maryland soon solved its woes, using another late first-half run to separate from an opponent.

“They’re really impressive, and I’m glad they’re not in our league,” Notre Dame coach Mike Brey said. “Even though our league has some pretty good teams, and I got 19 more league games. Can you believe that?”

Out of the under-4 stoppage, Ayala chipped in five quick points — part of his 14 on Wednesday. Then guard Darryl Morsell heated up, as did forward Jalen Smith. Ayala went coast-to-coast, finishing with a thunderous right-handed dunk through traffic with 53 seconds remaining.

He let out a roar once he returned to the floor, an impressive precursor to Wiggins’ flush as time expired.

“I like Eric’s. Aaron’s going to have something to say, but I like Eric’s. Eric was much more aggressive. Like, ‘I’m making eye contact with you, and whatever happens, happens.’ So I like that better,” Morsell said. “Aaron’s dunk was phenomenal, too. It shows how much they work on their body, just the phenomenal athletes that they have become.”

Maryland outscored Notre Dame 21-7 to close the period, entered the locker room leading by 12 and returned to pour on more. Brey called a timeout less than three minutes into the second half after the Terps opened on an 8-2 run, with 3-pointers from Smith and Wiggins.

Smith posted his 10th career double-double — matching his season total from last year just nine games in — with 15 points and 16 rebounds. The shooting deficiencies began to dissipate late in the opening period, with treys from Wiggins and Ayala breaking through to set up a breakaway second half.

“The way we finished the half was terrific, cause it was a three-point game and I said, ‘Guys, let’s get it to seven or eight at halftime,’” coach Mark Turgeon said. “So I walked in and said, ‘Well, you guys did better than that.’”

Notre Dame, meanwhile, never found a groove on offense. The Fighting Irish shot 29 percent from the floor, with forward John Mooney leading the way with 17 points. What had been a tight first 16 minutes turned into another blowout, this time against a Power-5 opponent in the Big Ten/ACC Challenge, in which Maryland had lost six straight matchups.

Wednesday night followed a similar script as the Terps’ other nine wins — forming their best start since the 1998-99 season — with a slow beginning and rabid conclusion to the first half giving Turgeon’s team control.

And it was Wiggins’ two-handed slam, chasing down his own miss before rising up and throwing down, that lifted the Xfinity Center crowd to its feet. They hardly had a reason to sit down the rest of the way.

“Wow. They are really good,” Brey said. “That was varsity versus the JV tonight.”