Against the nation’s leading scorer, Darryl Morsell rose to the occasion — on both ends 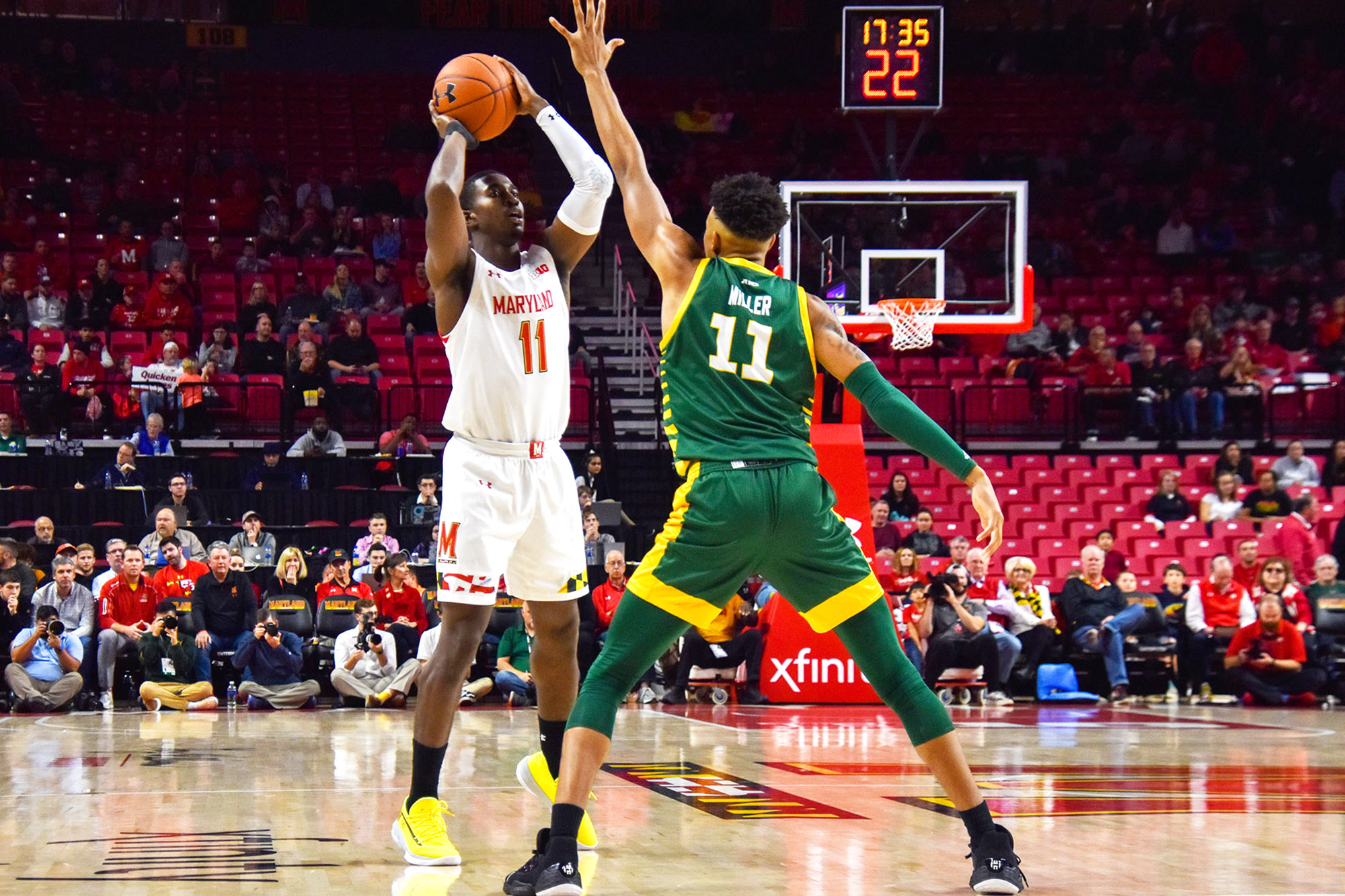 Shortly after the final buzzer sounded on No. 5 Maryland men’s basketball’s 84-63 victory over Marquette, Jalen Smith picked up Darryl Morsell and twirled his former high school teammate around. When Morsell’s feet returned to the floor once more, Smith whipped off his goggles and pointed at him.

Anthony Cowan led the Terps’ scoring against the Golden Eagles with 22 points. Aaron Wiggins added 15. But there was no mistaking the true difference maker in Sunday’s Orlando Invitational final. That would be Morsell, with his standout defense and timely offense on display for Smith and everyone else inside HP Field House.

Charged with guarding Markus Howard — who scored a combined 91 points in his previous two games — Morsell played a large role in holding him to just six points. And when the Golden Eagles pulled out a zone defense, so often a kryptonite for coach Mark Turgeon’s offenses, Morsell’s freedom to roam the baseline and the paint to find openings ensured the scheme wasn’t crippling.

Maryland faced its toughest challenge of a young season Sunday. With Morsell’s contributions, the Terps passed with flying colors. The Baltimore native is known for his defense, and he put in another lock-down effort. But with 17 points — seven of which came in the final six minutes — Morsell was the unlikely offensive juggernaut who ensured Marquette wouldn’t sneak its way back into the game.

“The other guys, they’re great scorers, great offensively,” Morsell said. “I just knew I would find my niche eventually, and I kind of found it late in the second half in the middle of the zone and on the baseline.”

When the Golden Eagles first used a zone defense midway through the second half, the Terps’ offense hit a wall. For a five-minute stretch, Maryland clanked eight of nine attempts, most of which came from outside the lane as the 2-3 scheme cut off its inside presence.

But then Morsell began lurking underneath the rim, or along the baseline, or near the free-throw line — anywhere he could find a bit of space. And that space turned into points, beginning with his short jumper along the baseline with about six minutes remaining. On Marquette’s next trip down the floor, Morsell’s pressure helped Cowan steal the ball away from Howard.

Then came a free throw for Morsell, fouled on another attempt along the baseline. He battled multiple Marquette defenders for an offensive board — one of 10 total rebounds, part of his double-double — and scored 18 seconds later. He scored again with a minute remaining and leapt into the air to celebrate an assist on Smith’s throw-down off a nice bounce-pass feed.

“The zone worked to a certain point,” Marquette coach Steve Wojciechowski said. “We disrupted their rhythm for a while with our zone, we were able to get some stops and run-outs, but obviously not enough to where we could cut it to a two- or three-possession game.”

For Morsell, his defensive efforts often feed his offensive production. There’s a certain yin and yang to either side of the floor — when one is going great, the natural complement is the other. He feels his defense drives his offense, allowing him to run the floor and show off his athleticism.

He wasn’t alone in shutting down Howard, though, with Cowan and Wiggins assisting on well-executed switches.

And a lot of players put in impressive performances in Florida, helping the Terps to a regular-season tournament title and their best start since 2006. It was Cowan who held the MVP award next to Mickey Mouse after he averaged 24 points over three games.

Still, it was Morsell’s efforts that kept Marquette at bay and solved Maryland’s longtime zone defense woes, and it was Morsell who deserved Smith’s celebratory spin and the acknowledgement from the crowd at HP Field House, raining down shouts of “Darryl” as the streamers fell through the air around him.