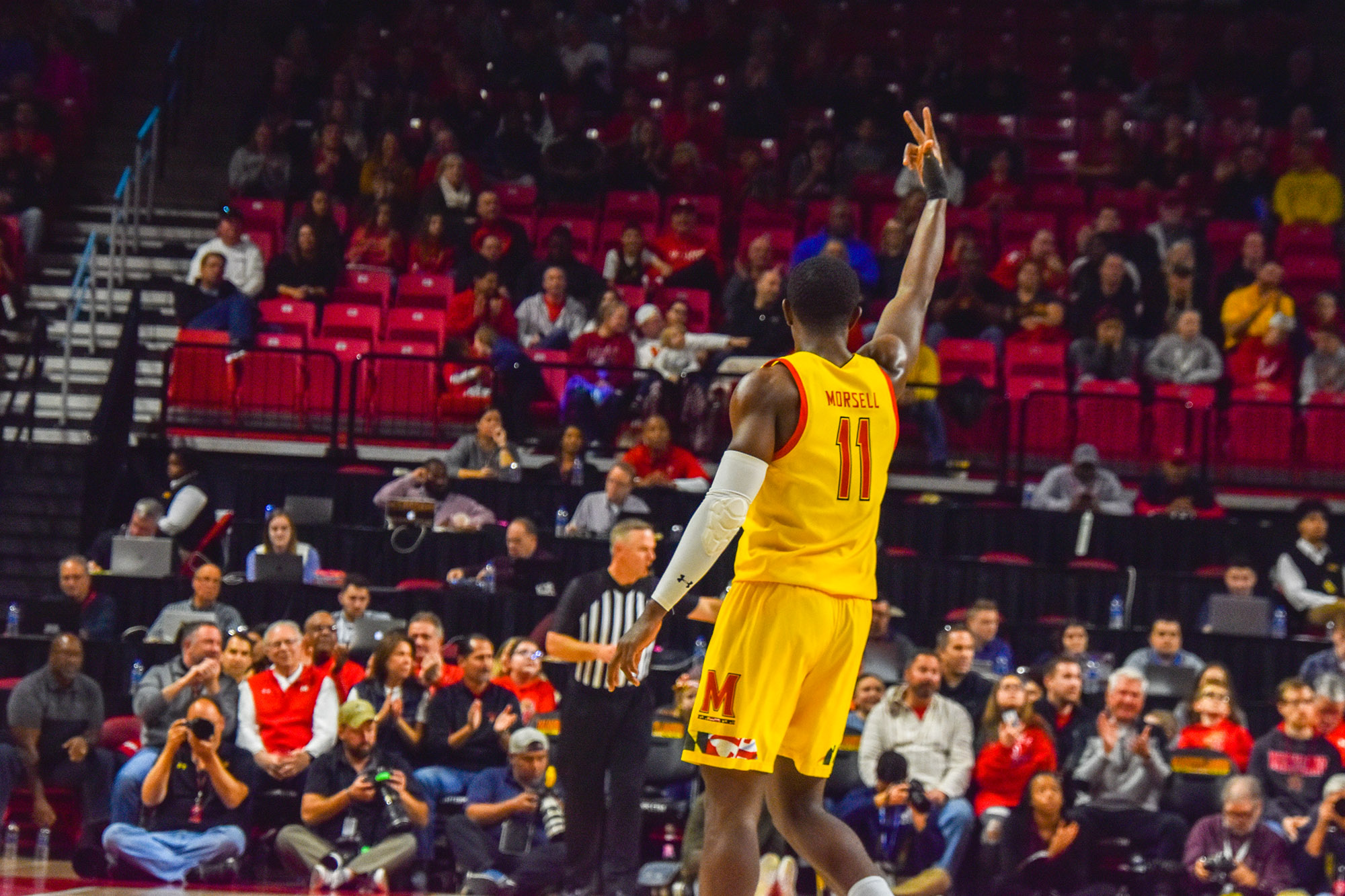 Guard Darryl Morsell celebrates a three during Maryland's 80-50 win over Oakland at the Xfinity Center on Nov. 16, 2019. (Joe Ryan/The Diamondback)

ORLANDO — Less than three hours after his team won in Friday’s second round of the Orlando Invitational, Maryland men’s basketball guard Darryl Morsell settled in at the team’s hotel to watch Marquette play USC on TV.

The Terps had already solidified their spot in Sunday’s tournament final and were waiting to learn whether they would play the Golden Eagles or the Trojans. As Morsell watched the matchup, he couldn’t help but notice Marquette guard Markus Howard’s scoring total quickly ballooning.

Howard eclipsed the 20-point mark just over 10 minutes into the first half en route to a 51-point showing that carried his team to a 101-79 victory, vaulting the Golden Eagles into the final.

On Sunday, Morsell, Maryland’s best perimeter defender, is expected to be charged with stopping Marquette’s star guard — a shift from his role as a spectator two days before.

“I know when he puts it up, it’s a high percentage that it’s gonna go in,” Morsell said. “So we’re going to have to pick him up early, chase him off the three-point line and just try to make his night as long as possible.”

Howard’s 51-point effort was two short of his career-high, and it came just a day after he poured in 40 points to lead Marquette past Davidson.

His 91 points thus far in the Orlando Invitational broke the tournament record, which Monmouth guard Justin Robinson’s set in 2015 with 77 points. But Howard needed just two games to surpass Robinson.

“To be honest, I still don’t know if I’m guarding him. But if I do, I’m definitely excited for the challenge,” Morsell said Saturday afternoon. “He’s very talented — you see the numbers he’s put up in this tournament. So we’ll definitely be prepared.”

Morsell is the logical option to cover Howard — a dynamic guard and the nation’s leading scorer at 29.3 points per game — given his experience in prior matchups against lethal options.

Last season in a home game against Purdue, the 6-foot-5 Morsell defended then-Boilermakers guard Carsen Edwards, who was listed at 6-foot-1 — only slightly taller than Howard’s 5-foot-11 frame. In that 70-56 victory for Maryland, Morsell turned Edwards into a volume scorer. Edwards finished with 24 points but shot an inefficient 8-for-27 and 3-for-13 from three-point range to get there.

“There’s only so much you can do on the little guys. It’s easier to take big guys out of the game than it is little guys,” coach Mark Turgeon said. “Darryl takes a lot of pride in it. We’ll be fired up to play against Marquette because they’re a good team and that kid’s special.”

Turgeon and Morsell conceded that Howard will still find scoring success, regardless of how good the defense on him is.

The ninth-year Terps coach said he anticipates throwing multiple bodies at Howard to give him different looks defensively.

Beyond being the primary defender, Morsell also recognizes the importance of playing sound team defense when Howard shakes free on the drive or finds space off a screen.

“It’s definitely going to be a team effort. Can’t no individual stop a player like that,” Morsell said. “So hopefully we’re all locked in, and hopefully my team is there to help me if I’m assigned with that test.”

As Maryland looks to claim the Orlando Invitational title, one of the team’s primary directives will be making the game difficult for Howard. Fortunately for the No. 5 Terps, they have a player who relishes the opportunity to match up against the opposition’s go-to option.

“I love it,” Morsell said. “I love defense. I always heard the quote ‘Defense wins championships.’”

Should Morsell have a strong defensive display Sunday, the Baltimore native could turn that mantra into a reality at HP Field House in Florida.