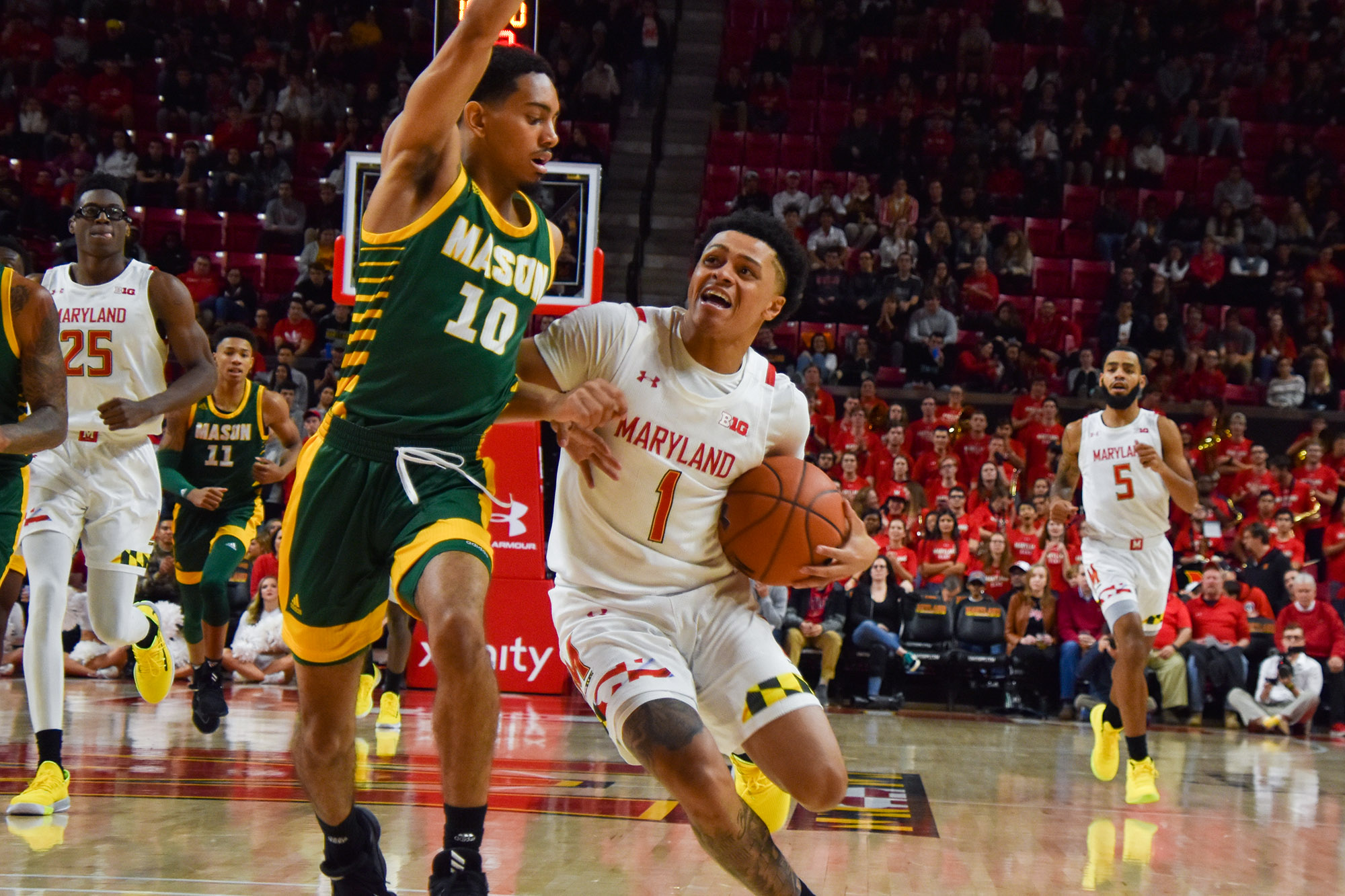 ORLANDO — With 53 seconds remaining in Maryland men’s basketball’s 76-69 victory over Temple in the first round of the Orlando Invitational, coach Mark Turgeon’s team gathered during an Owls’ timeout.

To protect its three-point edge, Turgeon wanted his squad to exhaust a large portion of the shot clock and get a quality shot to extend the advantage. Anthony Cowan wanted the ball for that moment, and Turgeon knew his senior guard was mad when he designed the play for somebody else instead.

McKie’s original game plan already centered on containing Cowan, but that didn’t stop the guard from pouring in a career-high 30 points — including 20 in the second half. Cowan’s similar performance in the second round against Harvard started slow — three points at halftime — before he broke through for 17 in the second half.

The two second-half scoring bursts helped lead Maryland past two teams vying for an upset over the No. 5 Terps and embodied Cowan’s ability to will his squad through high-pressure moments.

“I always feel good with Anthony on my team,” guard Darryl Morsell said. “I’ve been watching him do this same stuff since he was a little kid playing in the same AAU program.”

Cowan carried his team against the Owls. Squaring off against Alani Moore, an old AAU teammate with D.C. Assault, Cowan got Maryland’s offense on the board on its first possession with a 3-pointer.

The first half was just the start of the battle between the two D.C. Assault alums. Both finished the opening 20 minutes with 10 points and a pair of threes. Moore’s team took a 34-29 advantage into the break, but his counterpart came out of halftime with a distinct edge.

Cowan scored the Terps’ first seven points of the second half, pulling his team within one. That run was only a sign of things to come.

“I got it going a little bit early, started seeing the ball go in the basket,” Cowan said, “and then coach drew up some good plays to get me open shots, and I hit some.”

One play Turgeon drew up saw Cowan receive two screens while sprinting the length of the baseline with just over 2:30 to play and the game deadlocked at 62. Due to the screens, Cowan’s defender lagged behind, allowing Maryland’s leading scorer to catch a pass for an open shot in the corner that pushed his point total to a career-high 28.

Two late free throws brought Cowan’s total to 30, making him the first Terp to hit that mark since Melo Trimble scored 32 against Northwestern in 2017. Twenty of his new career-high came following the break, prompting McKie to name Cowan the “difference maker” in the contest.

Turgeon lauded his guard for his composure while orchestrating the offense and for not forcing the issue against teams trying to shut him down.

“I’ve just been taking what the defense has been giving me — not forcing anything,” Cowan said after Thursday’s victory. “That’s just been my focus the whole year so far — just going with the flow, not trying to force anything.”

Harvard coach Tommy Amaker was well aware of Cowan’s scoring output before his team played Maryland on Friday. Amaker mixed up the primary defender on Cowan, limiting Maryland’s leading scorer to three points in the first half.

But Amaker knew it would be difficult to replicate that defensive display in the second 20 minutes.

“He’s an outstanding player and scorer — veteran player,” Amaker said. “We had different people on him at all times, but you’re not going to hold him down for a full 40 minutes.”

In the first eight minutes of the second half, Cowan tacked on just one free throw to his halftime total, entering the under-12 timeout with a grand total of four points.

After that timeout concluded, the huddle broke and Cowan headed back to the court. Assistant coach DeAndre Haynes stopped the guard and gave him a brief message.

“This whole year, [Haynes has] just been somebody that I’ve really connected with and can talk to,” Cowan said. “He basically just told me to settle down. That’s what I did, and I got it going a little bit.”

Out of the break, Cowan scored 10 points and dished an assist to forward Jalen Smith during a two-minute 12-2 run that moved Maryland in front.

Cowan finished with 17 points in the second half, once again leading his team past an upset-minded unranked squad. The performance was a second consecutive mature showing from the point guard in high-intensity moments.

“When Anthony was younger, he would force things, and now he’s not forcing things,” Turgeon said. “It made him talk about how much easier the game is for him because he’s just making smart decisions.”

The Terps trailed at the half in both of its first two games in the Orlando Invitational. But with Maryland’s undefeated record and top-five standing in jeopardy, Cowan delivered.

Even as his second-half scoring numbers rose and the focus tilted even more toward him, the senior was unfazed. He came up clutch time and time again to help his team advance to Sunday’s Orlando Invitational final against Marquette.

“[Anthony] thrives off that. If you pay that much attention to him, he’s going to try to go at you,” Smith said. “That’s what I like about him — just that fiery aspect of him.”