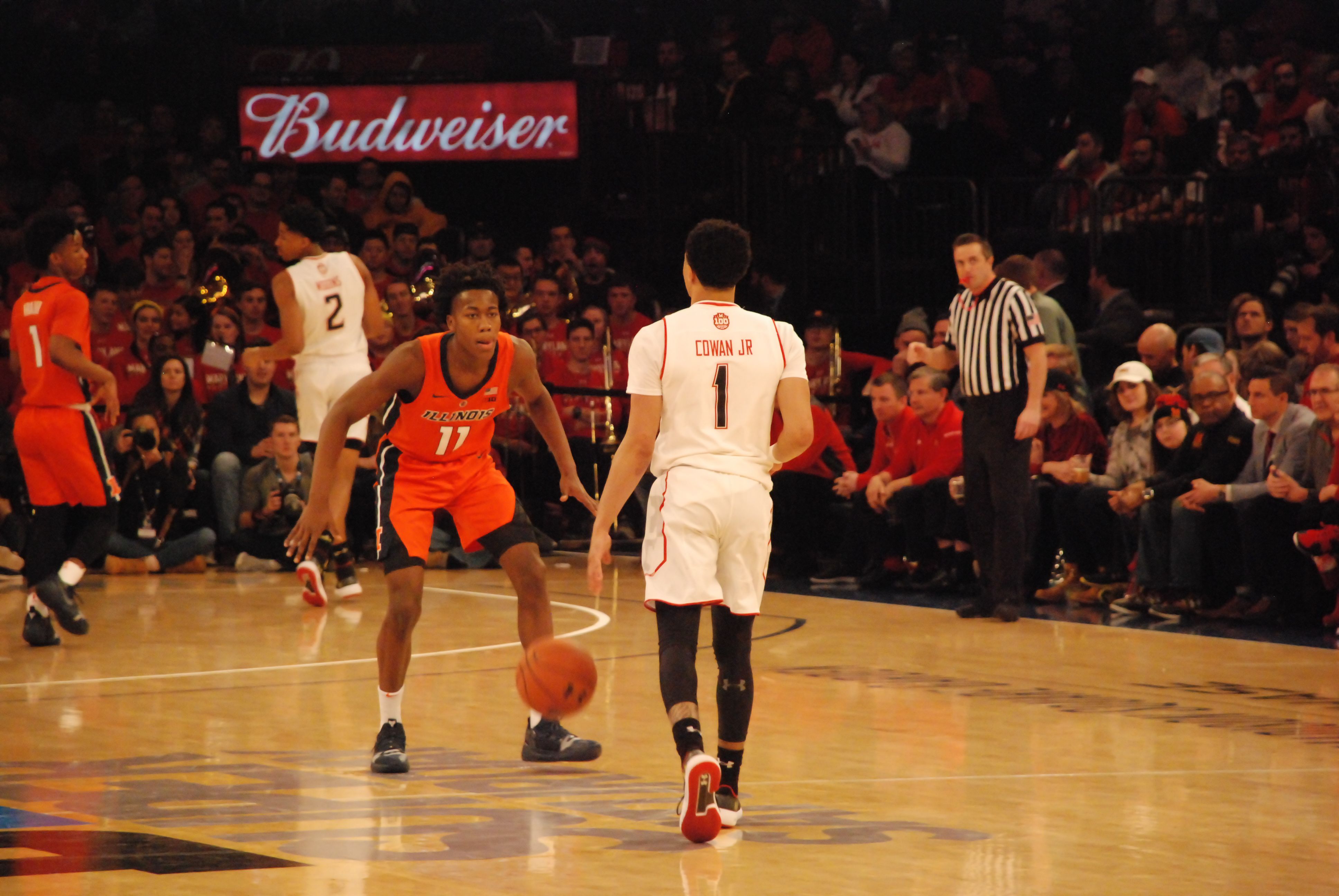 Big Ten play begins for the Terps when they take on Illinois on Saturday. No. 3 Maryland will look to take care of business while the Fighting Illini will look to bounce back from a mid-week loss and pull off the upset. We spoke with Miles Powers-Huang of the Daily Illini to learn more about Illinois. Our conversation has been lightly edited for clarity.

Despite its success, Maryland has often started games slow so far this season. How can the Illini take advantage if the Terps get off to another shaky start on Saturday?

The interesting thing about starts to games is that the Illini also have an issue with coming out of the gates cold. Illinois was simply terrible in the first half against Miami (FL) last time out, trailing 50-31 at the half. With both teams dealing with issues getting things going, the first ten minutes could decide who takes the game Saturday. It will be interesting to see how quickly Illinois uses small forward Tevian Jones, who has yet to play this year but was just cleared to return from a suspension. Jones, a highly-recruited sophomore, torched Maryland in Madison Square Garden last year. The small forward position has been Illinois’ weakness defensively this year, as Brad Underwood has gone to a three-guard starting unit of Andres Feliz, Ayo Dosunumu and Trent Frazier so far, hurting the Illini against bigger small forwards.

Kofi Cockburn has gotten off to a good start during his freshman campaign. What has led to his early success and how will he keep that going against an aggressive Maryland frontcourt?

Kofi is a load in an era where that type of center is dying more and more by the year. He’s beaten up guys that simply can’t handle him thus far. His early success should be taken with a grain of salt though, as he’s had great games against mid-major programs yet disappeared the only time game he faced semi-elite big man talent at Arizona. How he plays against a likely first-round draft pick in Jalen Smith will be a good barometer of where he’s at.

What will be the matchup to watch in this one?

For neutrals and casual fans, it would be easy to say Cockburn vs. Smith or Ayo Dosunmu vs. Anthony Cowan, but if you compare how the two teams actually play, the real deciding factor will likely come down to the power forward position. Maryland, at least recently, uses a four-guard lineup while Illinois goes a bit traditional with two back-to-the-basket bigs starting. That will mean Aaron Wiggins (I’m assuming because he’s the second tallest player that starts for Maryland) will be on Giorgi Bezhanishvili at the critical points in the game. Wiggins is a wing that can use his superior quickness to get free for open shots or beat Bezhanishvili off the dribble, while Bezhanishvili has the ability to have success by posting the smaller Wiggins up, crashing on top of him on the offensive glass or pick-and-popping and shooting mid-range jumpers over him. Whichever player between the two can impose their will on each other could be the man that wins the game for his team.

However, if the two teams match each other’s lineup, either by Illinois bringing in Tev Jones, Alan Griffin or Kipper Nicholls and going small or by Maryland bringing in Donta Scott, Ricky Lindo or the Mitchell twins and going big, the other deciding matchup will be Cowan against Dosunmu. Both guards are terrific, and if each have it going Saturday, it may just come down to who has the last shot. Illinois struggles with small, quick guards- see its games against Nico Mannion and Kris Lykes- so it will be interesting to see what Brad Underwood’s defensive scheme for Cowan is.

With the Illini having back-to-back losing records in Big Ten play, how important is this game, the first in conference play for both sides?

This game is probably bigger for Illinois because it has yet to show up in a meaningful game this year. Maryland has shown it can take down a solid Marquette team possessing one of the best players in the NCAA, while Illinois got run out of the gym in the second half at Arizona and suffered the opposite fate at home to Miami, Monday, where it didn’t show up in the first half. This game is one that Maryland probably looks at and says it needs to win to show the committee it can take care of business, while the Illini are probably looking at this game and hoping to just prove they can compete with a tournament-caliber team.

Illinois wins if Trent Frazier makes big shots and the team limits fouls. Frazier has put up a nice stat line since he arrived on campus as a freshman. but much of it has usually come by beating up on weaker teams or trying to lead a comeback effort down big against teams taking their foot off the gas pedal. Frazier still needs to show he can actually be productive in an efficient manner against a good team, and Saturday will be his latest opportunity. When it comes to fouling, Illinois has always been near the top of the NCAA rankings in terms of most fouls the last three years with Brad Underwood not being shy to admit that his style will breed more fouls than average. However, if the Illini want to win on Saturday, taking away free points for the Terps at the line will be essential.

Maryland wins if it limits turnovers. Brad Underwood likes an up-and-down game, and Illinois needs to create havoc in transition off turnovers to do so. The Terps have a deeper roster with a senior leader at guard, so it’s a game that is there for the taking if they play to their capability.