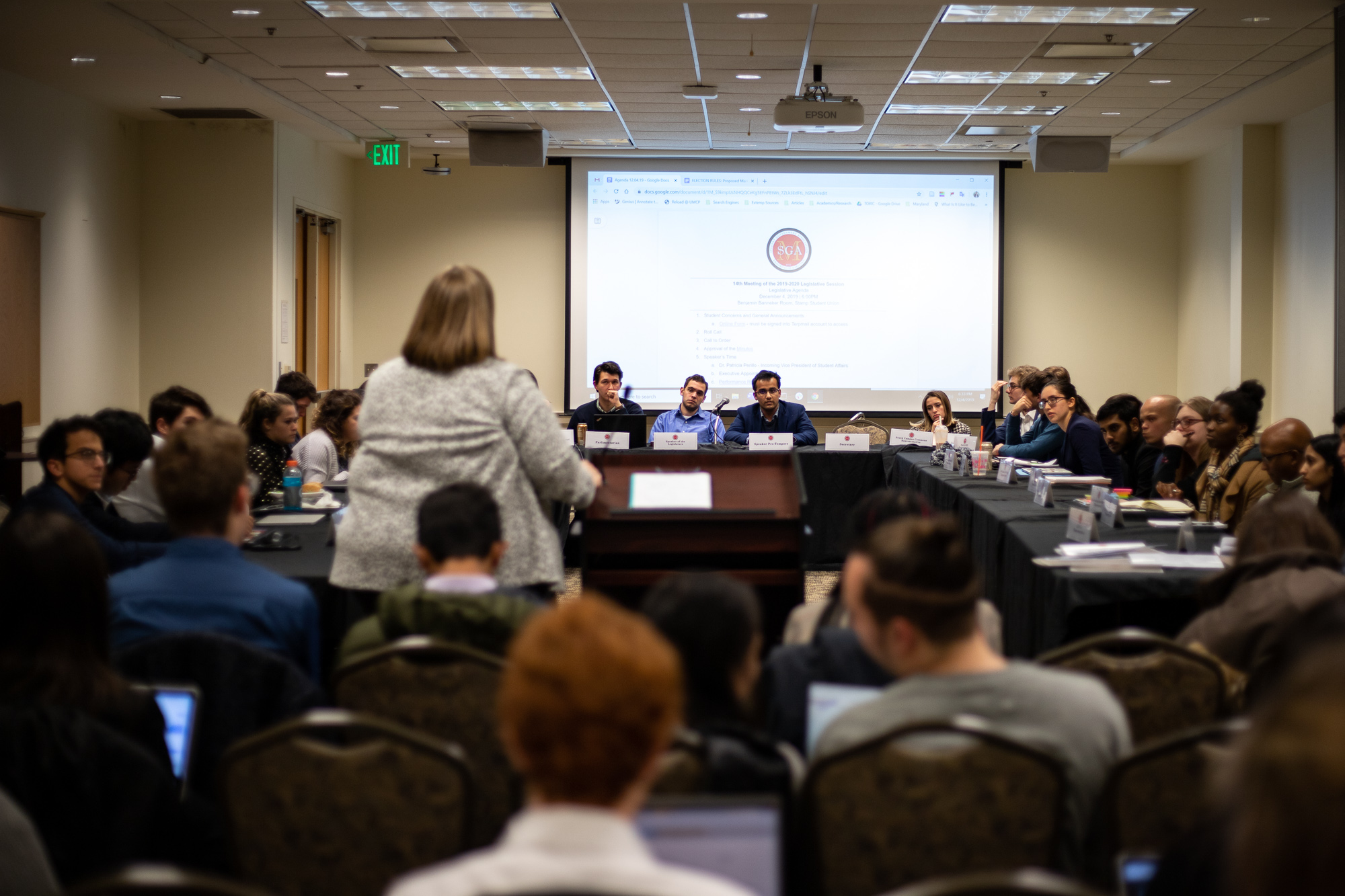 Out of eight children and 80 first cousins, incoming University of Maryland student affairs vice president Patricia Perillo was the first one to go to college.

She only applied to one university — the University of Delaware, 20 minutes away from her home. She wanted to stay nearby and take care of her siblings. But the education transformed her, and it helped her find her calling to higher education, she said.

Perillo, who is set to start at this university on Jan. 21, spoke at the Student Government Association’s meeting Wednesday to ask for their collaboration in addressing a variety of issues, including college affordability, race relations and students’ mental health and wellbeing.

“I really see you as really important citizens of this campus and you are co-creators — with faculty, with staff, with students — we are in this together,” she told the SGA. “Your voice, your leadership has enormous power and possibility, and I want to journey alongside you.”

One of the main issues Perillo brought up was student safety in the wake of racist incidents. She wants to spark dialogue about different structures and systems that have historically let racial minorities down.

So far this semester, there have been at least six hate bias incidents motivated by race or color, according to the university’s diversity and inclusion office’s online log.

“We have to pay attention to the issues around race that have been elevated over the last year and a half,” she said.

In May 2017, 2nd Lt. Richard Collins, a black Bowie State University student, was fatally stabbed on this campus. Sean Urbanski, a white former student at this university, is set to stand trial beginning Monday on murder and hate crime charges in Collins’s death.

Although SGA business representative Jaime Atilano applauded Perillo’s efforts to collaborate with SGA, they would also like to see further collaboration between Perillo and other multicultural organizations, they said.

“Her coming to SGA was definitely a really great step, but I would also like to see her attending other student organizations on campus if she’s really for the cause,” said Atilano, a member of the SGA’s diversity and inclusion committee. “She needs to have this kind of understanding of how every community and intersecting communities deal with racial issues on campus.”

Perillo also mentioned a variety of other student issues, including making sure college is affordable for all Maryland students and paying attention to new Title IX policies.

Elena LeVan, the SGA’s director of sexual misconduct prevention, said she was pleased to hear that Perillo cares about this issue.

“I was also really glad again to hear her say that she wants students to be involved in the process, especially because the policies and procedures are going to go under review again next semester for Title IX,” said LeVan. “I definitely see her as an ally.”

As for affordability, Perillo said she wants to improve cost accessibility for all students — regardless of their financial situations.

In addition to offering her concerns, Perillo asked legislators to write down or think about what they believe to be the most important issues facing this institution. Then, Perillo shared her own thoughts and invited the legislators to speak up.

[Read more: A guide made by UMD SGA aims to provide support and healing to sexual assault survivors]

“Safety for me is such a big thing. It corresponds with many different aspects surrounding physical, mental and emotional wellbeing … and also safety in terms of privacy, especially regarding undocumented students,” Atilano said.

SGA president Ireland Lesley sat on the search committee that ultimately recommended Perillo as a finalist for the position. When she first met Perillo, she said she was surprised by her dedication to student needs.

“I was blown away by her commitment to students,” said Lesley, a senior government and politics major. “I can tell that she’s incredibly student-centered and she realizes that that’s such a critical part of her job which is what made her stand out so much.”

Perillo plans to form an advisory committee open to student leaders to continue collaborating with the SGA and other student leaders across different student groups on campus. She has also scheduled individual meetings with various student groups to hear their thoughts on what concerns around campus should be addressed.

With just about a month and a half left until Perillo assumes her post as student affairs vice president, Lesley said she looks forward to working with her.

“Students should find a lot of hope in her leadership,” she said.