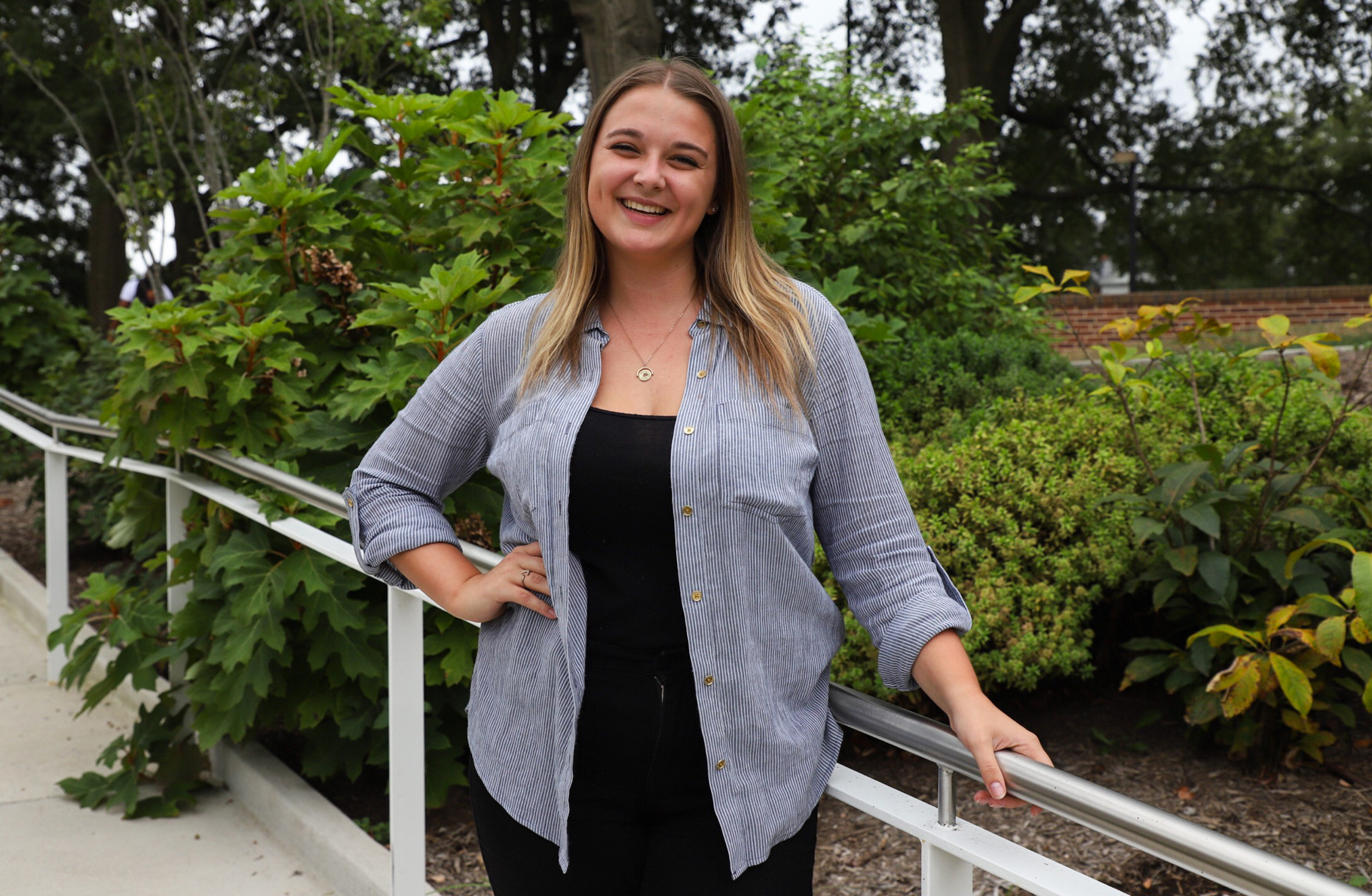 Elena LeVan, director of Sexual Misconduct Prevention at this university, has a goal to spread awareness of the "Red Zone," which is the time period from August through November in which 50% of all reported sexual misconduct incidences occur. (Evan Kramer/The Diamondback)

When Kait Watson was in high school, she felt trapped and voiceless.

She first started dating her boyfriend during her senior year and didn’t notice any red flags. But then, a few months in, he began to show signs of jealousy towards Watson’s past relationships, and current friendships with other boys.

That’s when her relationship began to “spiral out of control,” she said. He became aggressive, and would physically attack her. It continued for around a year.

With her family’s support, she was able to end the relationship. Now, Watson, a senior public health science major, is working with the Student Government Association’s committee for sexual misconduct prevention to provide a healing guide to connect and support students who have suffered similar trauma.

Inspired by a similar project at the University of Michigan, the committee is planning to pull together a collection of anonymous submissions of art, poetry, prose and music produced by anyone hurt by sexual misconduct or violence.

The guide — called “For Survivors by Survivors: A Living Guide” — aims to help those who are currently working through traumatic experiences understand their emotions and come to realize that what they’ve been through doesn’t define them.

The group is shooting to publish the guide online by December. Later, it plans to release a printed version.

“I am incredibly excited about this project, because it is very close to my heart,” Watson, the committee’s Vice Chair of Wellness, said. “[I] attended art therapy for a few years after and it really helped me find peace with my emotions.”

Elena LeVan, the SGA’s sexual misconduct prevention director, said although she thinks the guide will be helpful, the SGA doesn’t intend to offer it as a one-size-fits-all approach to healing.

“Everyone goes through their healing process in a different way, so the goal is not to tell people how to heal, but to give survivors a way to share how they got through their process, and to give other people some ideas for where to start,” she said.

To get the submissions, the committee aims to launch a Google Form for students to send in their work within the next two weeks. Members hope to advertise through university resources such as CARE to Stop Violence and the Office of Civil Rights and Sexual Misconduct.

Though the committee is waiting to design a prototype of the guide until it starts receiving submissions, it wants to organize it by content.

Members also plan to reach out to departments like the women’s studies and African American studies departments, as well as the LGBT Equity Center, to ask officials to spread the word about the guide. By doing so, committee members hope to get a diverse range of submissions.

Providing a guide to survivors of trauma at the university is especially important, considering the high rate of sexual and domestic violence on college campuses, said Chisom Ojukwu, the committee’s deputy director.

“People are going through trauma,” she said. “[And] they’re most likely dealing with it in silence.”

One in five women reported that they had either been a victim of attempted or completed sexual assault by their fourth year of college, according to a 2018 guide from the Office for Victims of Crime.

At this university alone, there were 249 reports of sexual misconduct to the Office of Civil Rights and Sexual Misconduct during the 2017-18 academic year — the highest number of reports in recent years.

Ojukwu noted that the guide is also meant to help those who have been sexually assaulted before coming to college, but are still working through the trauma.

She also pointed out that people of color are more likely to be sexually assaulted than their white peers — something that she said might be overlooked at Maryland, where people of color make up 43 percent of undergraduates.

Several student organizations and university departments across the campus have made it a priority to support students in various ways, through such things as confidential counseling and 24/7 helplines.

One such organization, Preventing Sexual Assault, works to spread awareness and encourage action on the issue of sexual assault. The organization’s president, Sophia Blake, shared her thoughts on SGA’s latest initiative.

“I am hopeful that survivors will feel comfortable with sharing their coping mechanisms to help others, but also understand that it is sometimes hard to revisit a trauma,” Blake, a senior communication major, wrote in an email on Sept. 25. “I am excited to see how student orgs on our campus are working to help survivors of sexual violence.”

Sophomore journalism major Michael Hernandez knows firsthand how therapeutic art can be — he said being creative has helped him through hard times.

“Trauma can last for years and this [guide] could be the start to healing for many victims,” he said.