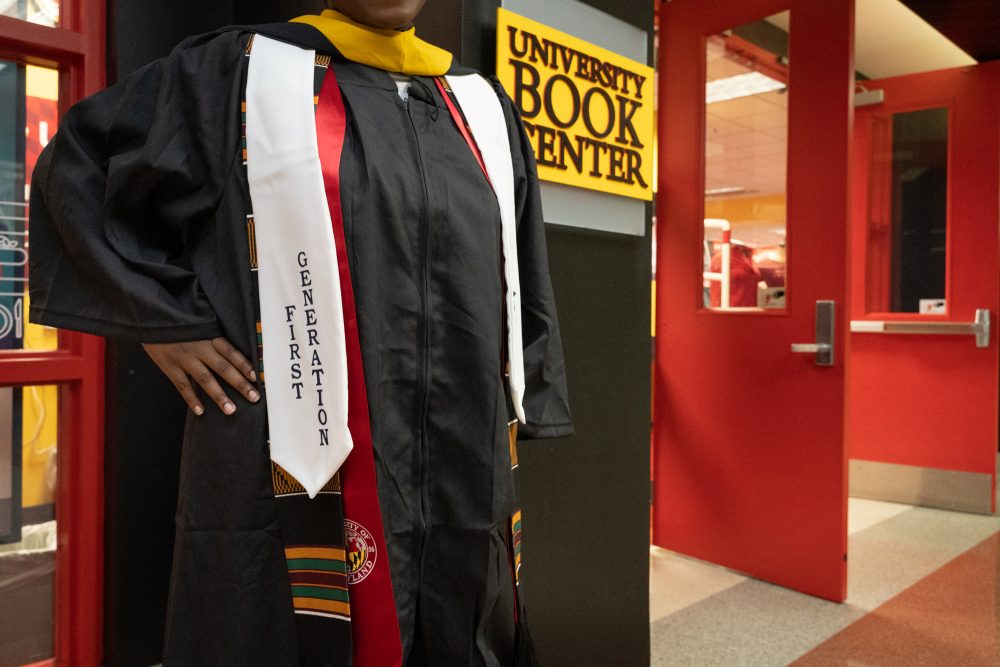 As graduations approaches at the end of each semester, many students head to the University Book Center to purchase their graduation attire. The Student Government Association and the Stamp Student Union created a fund to help cover costs of caps and gowns for University of Maryland students. (I'Shea Boyd/ The Diamondback)

The University of Maryland’s SGA has granted $500 to help undergraduate students who have financial need purchase regalia packages for December graduation.

Currently, an undergraduate regalia package — which includes a cap, gown, tassel, stole and departamental hood — costs up to $150. Students who can’t afford the package can apply to the newly-established fund, which will either subsidize or cover the entire cost of the package.

“College graduation is something that unifies us as a student body. It’s something that we all look forward to,” said Doron Tadmor, the Student Government Association’s student affairs vice president. “The high cost of caps and gowns shouldn’t be a financial barrier.”

Stamp matched the SGA’s donation, bringing the total fund to $1,000.


To apply for funds, students must fill out an application to receive a voucher, which can be found at this university’s Student Crisis Fund website. The application, which is administered by the student affairs division, asks students to disclose their current financial situation and why they need the award.

According to the application, students will receive their decision after one to three days of processing.

And from December 2020 onward, the package will likely no longer include a hood — reducing the price even further, to about $89, Guenzler-Stevens added.

Last spring, students voiced concerns to Guenzler-Stevens regarding the prohibitive cost of graduation regalia. In response, Guenzler-Stevens and other university entities created a program that allowed more than 150 students to request support from the student crisis fund.

“Sometimes it really takes a story of a student to wake you up,” Guenzler-Stevens said.

She wants to make sure that students who have made it through their schooling have the opportunity to experience what it feels like to walk across the stage.

“You want to celebrate that you got to the finish line with your family and everything else,” said Guenzler-Stevens.


According to data from The Chronicle of Higher Education, the yearly tuition rate for both in-state and out-of-state students was $4,700 in 1998. Today, those rates have increased to $10,778 and $36,890 respectively, according to estimates from the financial aid office.

Financial barriers, such as the rising costs of tuition each year, can be one of the many factors limiting students from completing their degree, according to With Their Whole Lives Ahead of Them, a report published by Public Agenda.

The SGA, however, decided to donate the funds because it recognizes that college affordability is a growing issue for many students across campus, especially now given that this university’s tuition, among other fees, only continues to rise.

“This is a short-term solution to a bigger issue,” Tadmor said.

The SGA plans to look at this issue again in the spring and hope to donate more to compensate for the larger graduating class, said SGA president Ireland Lesley.

“For some students, that’s a huge financial barrier — it doesn’t allow them to walk at graduation,” she said. “If there’s a huge need, then obviously, we can revisit that.”