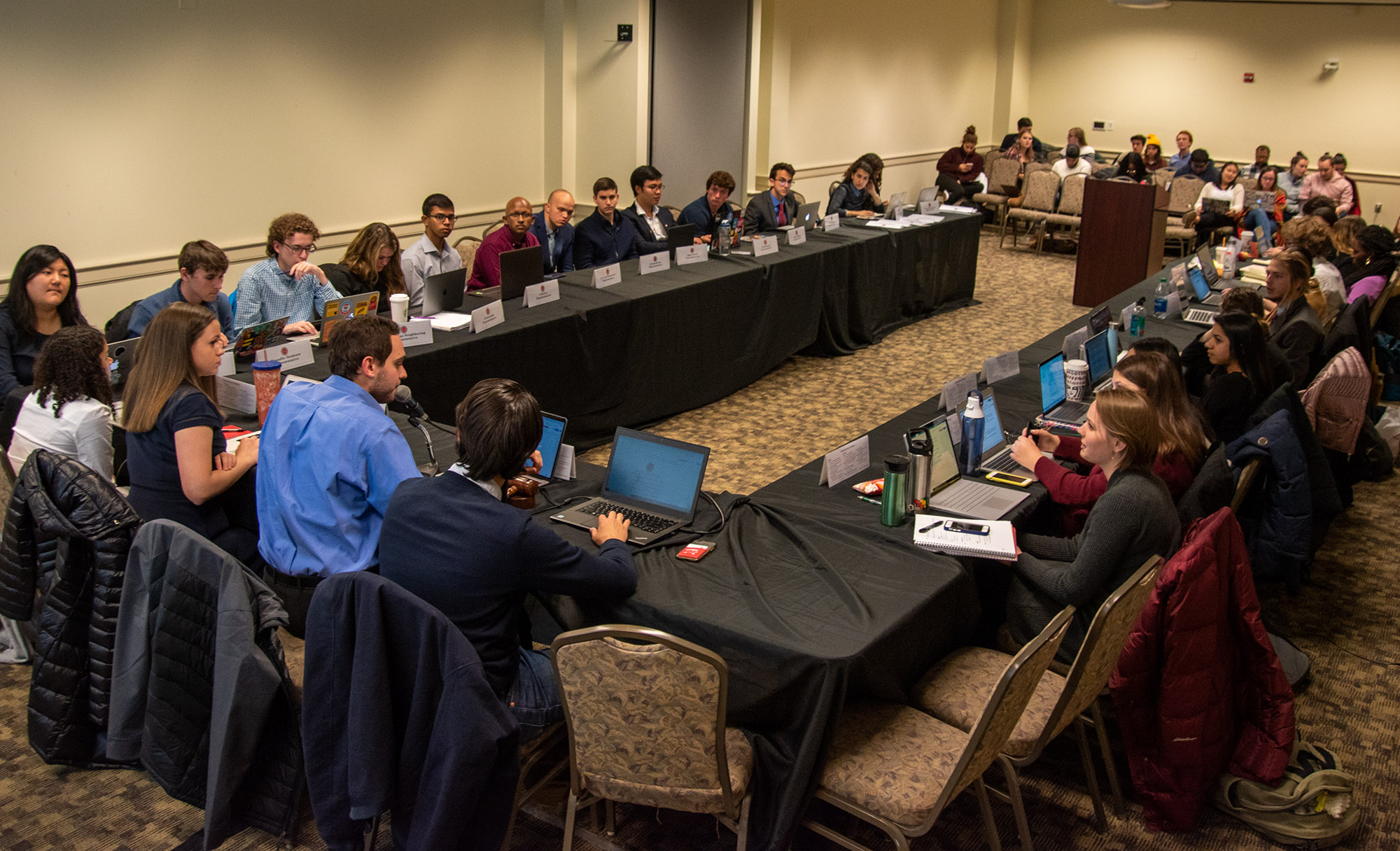 Two months after protesters shouting sexist and homophobic rhetoric sparked protests at the University of Maryland, the SGA voted Wednesday to call for the enforcement and revision of the university’s policies regarding free speech for on-campus demonstrations.

In September, four members of the Key of David Christian Center stood on McKeldin Mall taunting LGBTQ+ people, Muslims and women — prompting hundreds of students to surround them and shout them down.

Now, claiming that the group’s threatening and disruptive nature was a violation of university guidelines, the Student Government Association passed a bill to work with campus officials in order to ensure they hold future violators accountable.

The bill received a vote of 28-0 with one abstention.

Alyssa Miller, the Greek residential representative and one of the 32 co-sponsors of the bill, said she believes that passing this bill is crucial in terms of protecting and preserving the rights of protest attendees.

“This is something that we all care about because we know that incidents like this, they’re not unique,” she said. “Unfortunately, they’ll continue to happen.”

According to the current guidelines, the university prohibits “harassing, physically abusive, threatening or intimidating conduct toward any person” — which the bill said the demonstrators violated by including slurs targeting people’s gender, gender identity or sexual orientation, among others.

These sorts of comments — such as calling specific people “whores” and telling one student she would be raped for wearing leggings — result in long-lasting trauma for some, said Elena LeVan, SGA’s director of sexual misconduct prevention.

“All that the things that were said were things that definitely could be traumatizing to people — whether that’s because of any of their identities or any of the experiences that they’ve had,” said LeVan. “There are things that would fall under our Title IX policy as sexual harassment or intimidation.”

The SGA also alleges that the demonstrators failed to comply with another section in the guidelines that prohibits demonstrations from disrupting classes or other scheduled activities.

“The group’s conduct disrupted the educational mission of the university by disrupting classes and causing students to miss class because of the harassment they endured,” the bill reads.

The university’s only public response to the demonstration came from diversity and inclusion vice president Georgina Dodge, who applauded student efforts but did not address possible policy violations.

“We support the rights of people to exercise their free speech rights on campus,” said David Pontious, the bill’s sponsor and SGA’s off-campus neighboring representative. “But also when things do go over the line and they go over the line to harassment, intimidation, threats — that is where we need to draw the line.”

The SGA plans to send a letter to the university’s administration demanding a clear layout illustrating how the university plans to enforce policies on free speech moving forward.

Then, they want to coordinate with the University Senate Campus Affairs Committee to make sure the guidelines stay accurate and error-free, and speak to University Police and other entities on campus to ensure that policies regarding free speech are being enforced and that violators are held accountable.

Additionally, the group will reach out to Stamp Event and Guest Services to construct a “comprehensive, accessible web page dedicated to free speech.”

SGA President Ireland Lesley said she hopes that passing this bill will allow the body to work closely with administrators to avoid conflict in the future — and cause members of University Police to enforce policy asking violators to leave.

“I hope all of the administration really takes these recommendations really seriously,” she said. “It’s really important for this student voice to be a critical part of these revisions.”