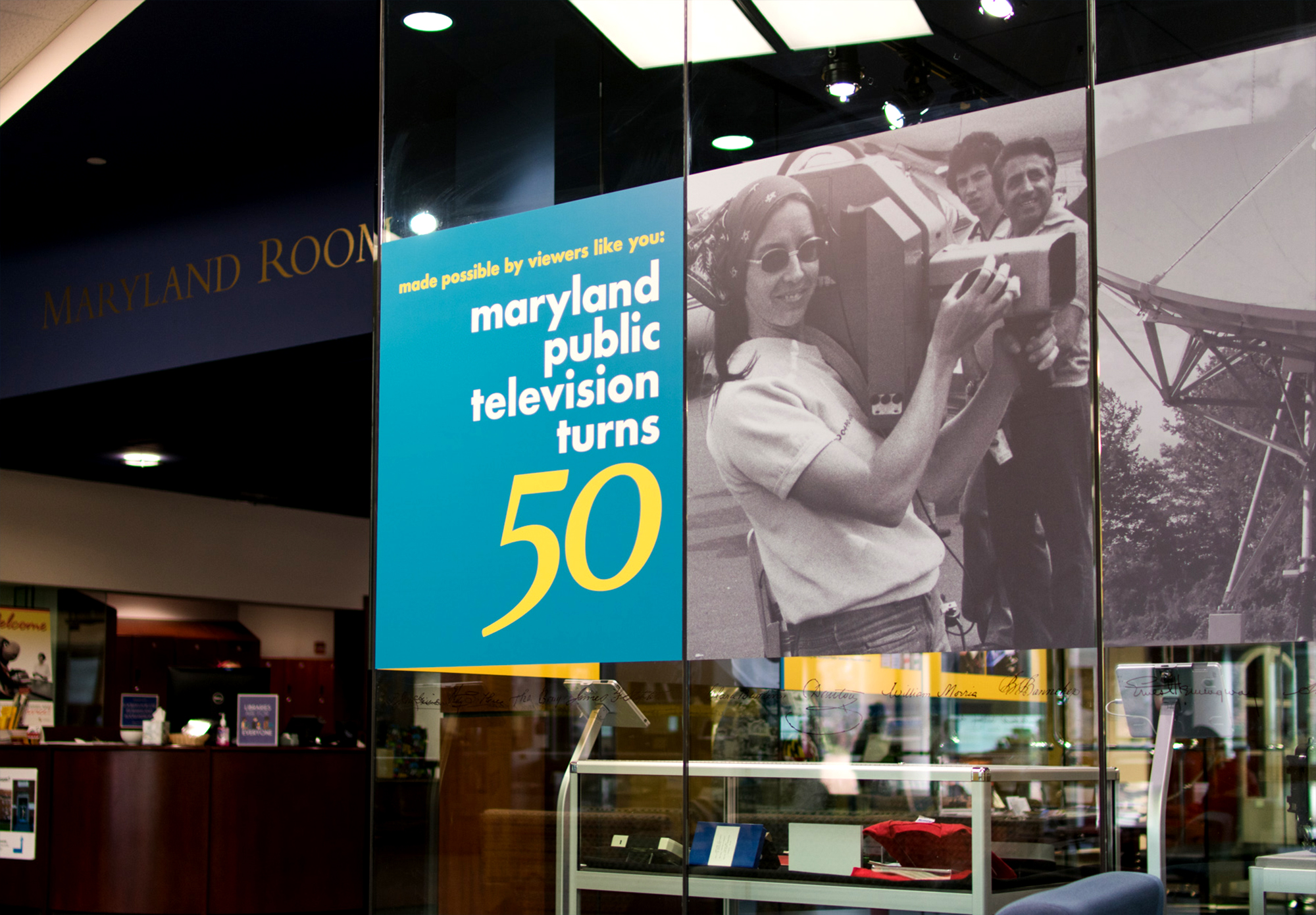 The Maryland Public Television exhibit at Hornbake Library shows the development of MPT over the span of 50 years. (Gabby Baniqued/The Diamondback)

By Elena Macias
For The Diamondback

The moment guests step foot into the exhibit — which opened in late August and will close in July 2020 — they are greeted by a treasure trove of archival materials. Prestigious awards and statuettes shine under the bright lights. A large blue and yellow banner is pressed onto the windows of the exhibit room baring photos, detailed information about the station and sharing its message: “Made possible by viewers like you.”

“It was … cool to see the evolution of television when you go around the room from the antenna to the old microphones and then to how the cameras evolved over the years,” said Sam Saltwick, a senior computer engineering major.

Saltwick visited the exhibit for an honors seminar class. Although the visit was for an assignment, he found the exhibit’s set-up helpful when navigating through all the archival material.

When MPT representatives mentioned the station’s 50th anniversary, the idea started to come to fruition. MPT has serviced the state of Maryland and its citizens with news, children’s shows and original content since its premiere Oct. 5, 1969.

Schnitker recalled the process for choosing which material to include in the exhibit proved to be a challenge.

“Finding displayable objects was tough because great archival material doesn’t necessarily translate to great exhibit material,” she said. “Folders full of meeting notes can tell researchers a great deal about an organization’s development, [but] those aren’t things that are particularly compelling to look at under glass.”

Schnitker knew the exhibit would need video components because it was focused on a television station. One of the major highlights of the exhibit are the iPads — four on each side of the room — that show short clips of Maryland Public Television’s most memorable shows.

“Selecting videos was also a challenge because we’ve now digitized over 500 programs,” Schnitker said, “but there was no way we could sit down and watch every single one to select exhibit clips.”

Linda Taylor, an alumna of this university who teaches English to elementary school kids in South Korea, decided to visit campus and explore Hornbake during its extended Wednesday hours. She said she often studied in the library during her years as an undergraduate English major, before heading back to South Korea.

“That clip of the kids’ show about the animals [Kratts’ Creatures] was so cute,” Taylor said. “I wish I could bring the kids I teach in South Korea to this. I guess they’ll have to settle for pictures.”

While searching through clips to use, Schnitker said she was “delighted to discover along the way just how much UMD-related content there was.”

In a Maryland Newsrap clip, a round table of journalists discussed former men’s basketball coach Charles “Lefty” Driesell’s departure from this university in 1986 amid a controversial time for the athletic department. For many students, this piece of history sheds light on the university, and some could even make a connection to the tragic events the campus has recently gone through in just the past year.

The exhibit, which closes July 2020, illustrates the deep impact MPT has on the state, the university and Maryland citizens. Schnitker hopes visitors leave with an appreciation for the phenomenal scope of the station’s programming and all the ways in which they have served Maryland over the last 50 years.

“They’re still producing content that you just can’t find anywhere else and have always been fully dedicated to their mission to educate, inform and engage citizens of Maryland,” Schnitker said. “They know the value of their own legacy and work very hard with us to make sure it survives for coming generations.”