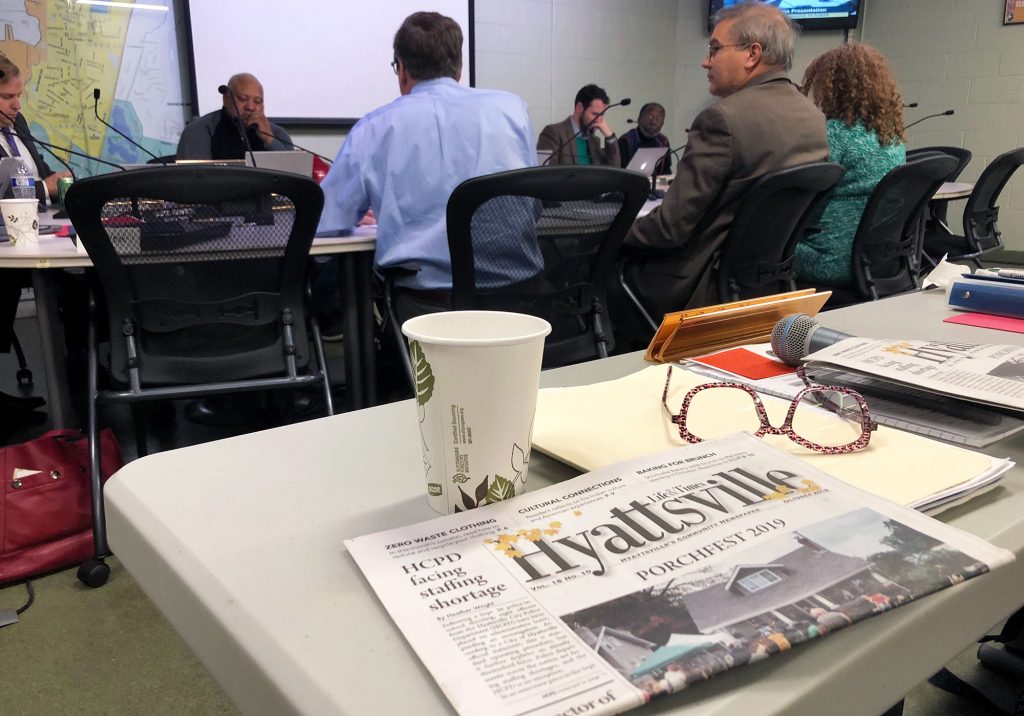 The College Park City Council discusses a new newspaper for the city at the meeting in Davis Hall on Dec. 3, 2019. (Angela Mecca/For The Diamondback)

The city has long considered ways to improve communication with its residents, and many council members said they think a new College Park-focused newspaper would be a productive way to increase community engagement.

“I’m really excited about the opportunity of having this going out to our residents,” said District 4 Councilwoman Denise Mitchell.

The Hyattsville Community Newspaper corporation’s board unanimously approved the proposal of a College Park paper in late October, and on Tuesday, Currie and the council discussed getting a paper up and running.

The proposal for the paper involves a partnership between the city and the corporation. If approved, the corporation’s board would expand to incorporate the College Park community and hire a separate editorial staff for the new paper.

The paper would be filled only with local content, according to meeting materials, including local crime coverage, council updates, city development reports and more.

The “monthly, full-color newspaper” would be mailed to “residential and business addresses” throughout the city and given out at local gathering spots, meeting materials said.

“I think print publications are still very, very effective, and actually superior in many ways to internet-based communication,” Currie said, adding that he thinks the community could potentially benefit a lot from a paper in the city.

In September, The Diamondback’s parent company announced the independent student newspaper, which covers the University of Maryland and the city of College Park, will stop publishing its weekly print edition in March. After 110 years in circulation, the company’s board president said the paper is getting close to the point where printing costs would be higher than the money brought in from advertiser funds.

The city hopes advertising from local businesses could become one of the new paper’s main sources of revenue. For now, the city would have to provide funding for its startup, a cost of $30,000. The cost is already accounted for in the city’s budget for fiscal year 2020, and Currie said that the hope is to have the paper self-sustainable by sometime next year.

District 1 councilwoman Kate Kennedy said if the city is to provide funding, there needs to be specific regulations in the agreement between the city and the corporation that prevents the city from having influence in the paper itself.

“In the agreement, we’re going to need to be really concerned about not being able to control editorial content, and making sure that it’s independent,” Kennedy said.

At the end of the discussion, the council moved to place the issue on the consent agenda for the council’s meeting next week, which allows multiple items to be approved at once and typically doesn’t require debate. Many members, such as District 1 councilman Fazlul Kabir, say they will support the proposal.

If approved, the first edition would be released between three to four months after the council’s decision, said Bill Gardiner, assistant city manager.

But Currie added that if the council were to decide this month, the first edition could be out as early as March 2020.

“We could get off the ground pretty quickly here,” Currie said.