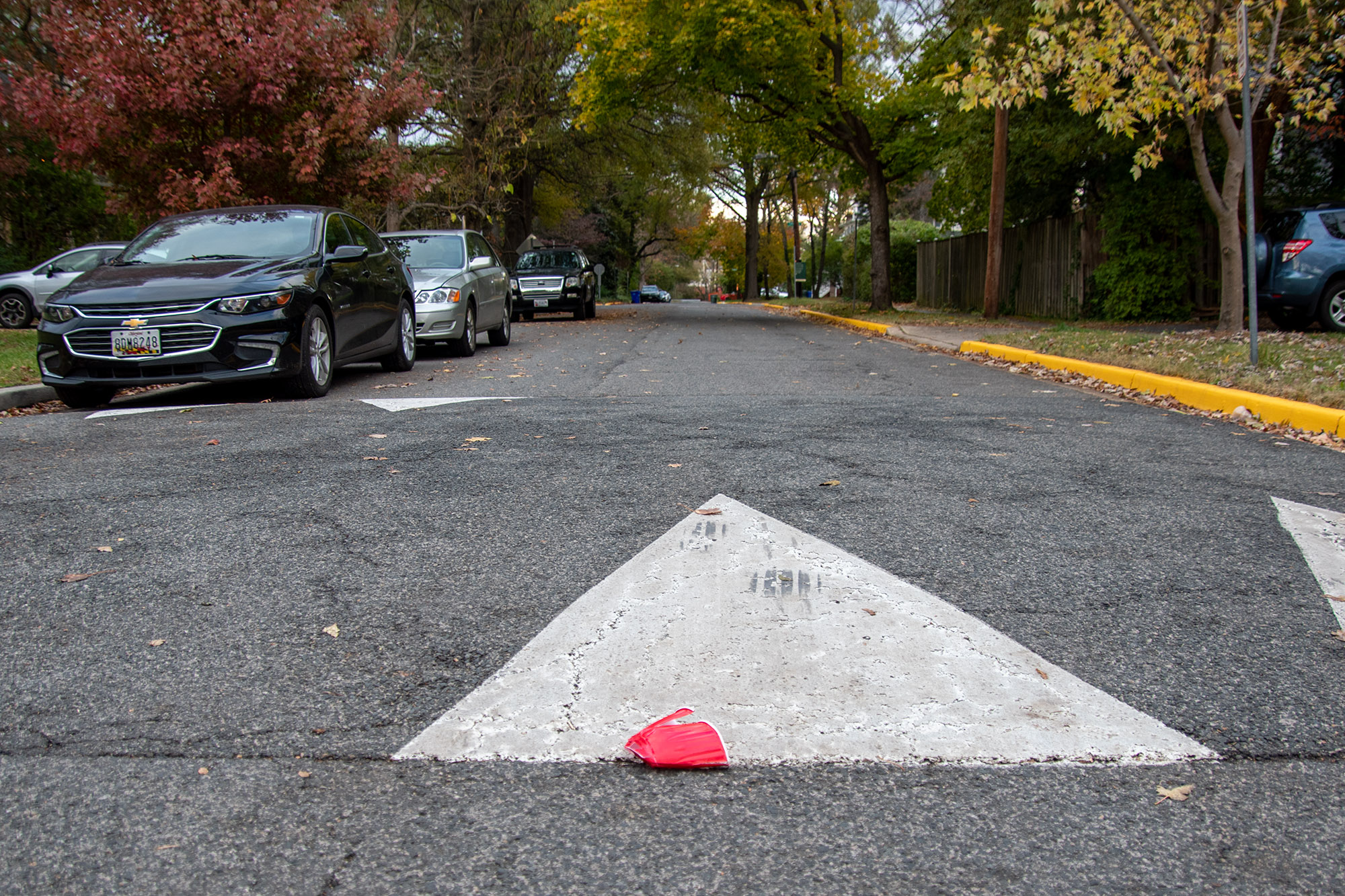 A red solo cup in the middle of Dartmouth Avenue in Old Town on Nov. 12, 2019. (Joe Ryan/The Diamondback)

The council unanimously passed the ordinance after a public hearing on Sept. 24, after about 60 students and residents had spoken — many not in favor. The ordinance defines “unruly social gatherings” — a group of eight or more people who participate in certain activities, such as underage drinking or excessive noise — as a nuisance and subjects landlords and residents who violate it to fines.

At a regular meeting and work session for the council Tuesday night, Dan Alpert, the student liaison to the council, reopened discussion of the ordinance, making a statement to the council about its enforcement.

There is currently a grace period that restricts the ordinance from being enforced in the city until Jan. 1. But on Tuesday, Alpert said he had been made aware of two incidents in which the police allegedly cited the ordinance when breaking up gatherings.

In response to Alpert’s concerns, Mayor Patrick Wojahn asked city staff to look into each of the incidents.

Bob Ryan, the director of the city’s public services department, said that no one has been “busted” for violating the unruly social gatherings ordinance yet, but the city has issued tickets for noise ordinance violations in the past month.

During the grace period, Ryan said, there could still be warnings given out related to the unruly social gatherings ordinance, but after Jan. 1, violations could result in a municipal infraction.

Alpert said both incidents — on Oct. 18 and 21 — were related to celebrations of a Jewish holiday that took place over that weekend.

The first incident was a dinner at an apartment near the end of Knox Road, Alpert said, and the second was at a house in Old Town. Alpert said that, to his knowledge, police did not issue citations, though he heard that the police referenced the threshold of “eight people,” which is language specific to the unruly social gatherings ordinance.

“The fact that police are being called to people celebrating a holiday, and people celebrating in general, and then being told that because they had over eight people there and they were being a bit too loud, is very concerning to me,” Alpert said.

The Diamondback reached out to several students who attended these two gatherings, but they declined to comment.

At the meeting, city manager Scott Somers said that while the unruly social gatherings ordinance hasn’t gone into effect yet, the city’s noise ordinance — which defines quiet hours in the city and levels of noise deemed disruptive — has been in effect for a number of years. He said he thinks that could have been the ordinance in play during these incidents.

“I think the noise ordinance is really the issue that is being enforced at this time,” Somers said.

Six full-time and three part-time code officers, as well as 15 police officers who directly work for the city, enforce ordinances in College Park, Ryan said. For the noise ordinance, they use sound meters to measure noise in decibels at the property line or beyond.

In order to avoid an interaction with enforcement officers, Ryan said in an interview that if residents are planning a social event, they can ask the city for advice on how to make sure they aren’t in violation of either the noise or unruly social gatherings ordinances.

City code changes from the unruly social gatherings ordinance are not aimed at anyone in particular, and don’t prohibit socializing in general, Ryan said.

“It’s not necessarily targeted to students,” Ryan said. “The council created this amendment, with the associated fines, to provide another tool for trying to improve the quality of life in our neighborhoods.” He added that noise complaints sometimes come from students themselves.

But to Alpert, the unruly social gatherings ordinance has already had negative effects.

Alpert said the two incidents where police were called to break up holiday dinners hardly fit this criterion.

“Are people celebrating a holiday or getting together for dinner the ‘worst of the worst’?” Alpert said. “Or is this ordinance going to continue to make people feel uncomfortable?”