With a thunderous dunk, Eric Ayala announced his presence against Notre Dame 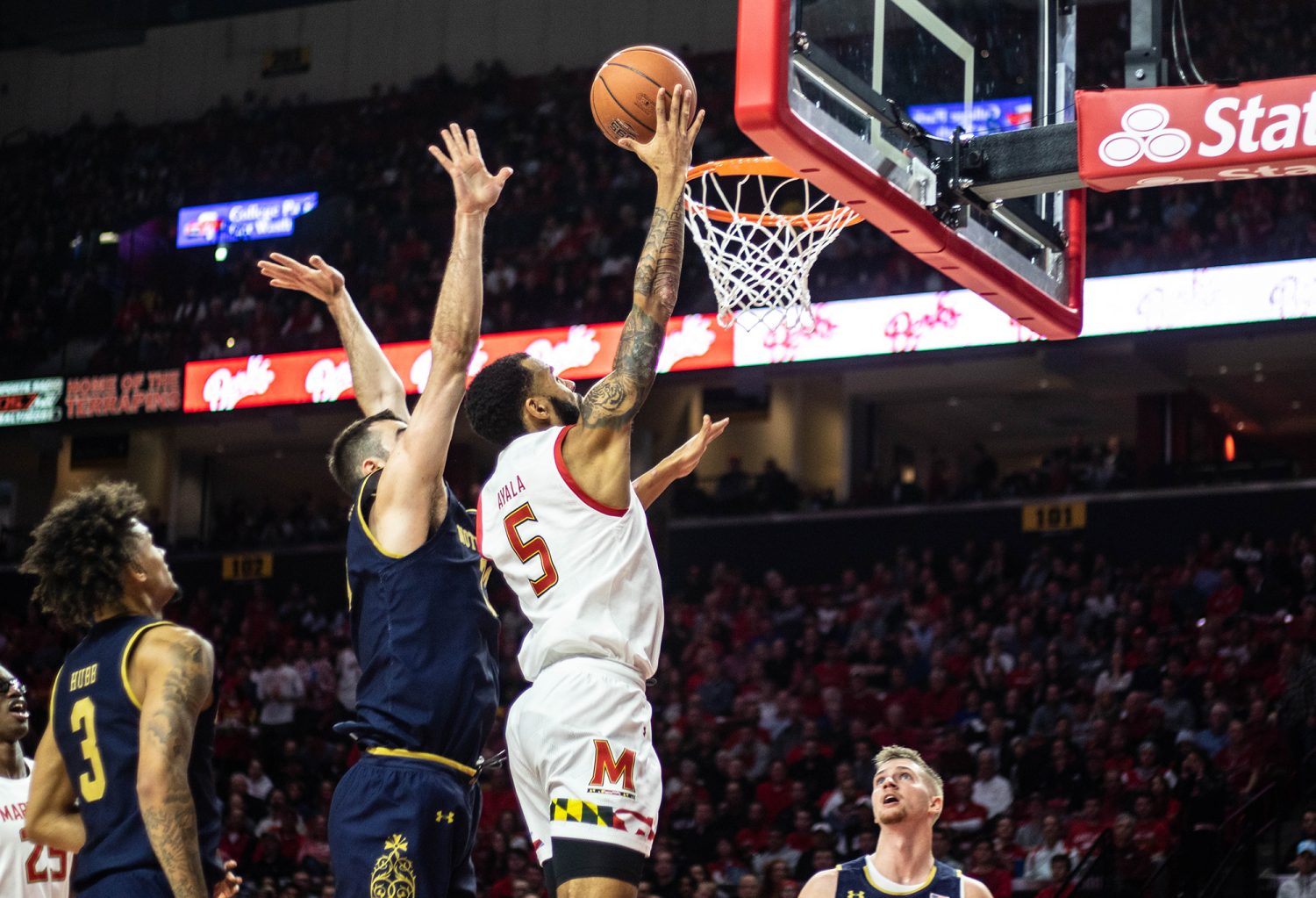 Maryland men’s basketball guard Eric Ayala refused to take any credit for his team’s two consecutive blowout victories after Wednesday’s game — both of which came with the sophomore guard in the starting lineup after he entered off the bench in six of the team’s first seven matches.

But in the No. 3 Terps’ 72-51 victory over Notre Dame, it was hard to miss Ayala’s imprint on the run that helped Maryland pull away.

During a game-changing 21-7 run that turned a two-point deficit into a 32-20 halftime lead, Ayala scored seven consecutive points before he punctuated his spark with an emphatic transition dunk. It was just another example of the sophomore providing a steadying hand, regardless of his role.

“Eric is a true embodiment of just playing for the team,” forward Jalen Smith said. “Tonight was his night, and he just showed it.”

Ayala has been in and out of the starting lineup, but he returned in the Orlando Invitation championship game Sunday because coach Mark Turgeon found the matchup favorable. And while slow starts have hampered the team in its previous contests, Ayala’s helped liven things up.

Maryland raced out to an 18-11 lead against Marquette after the first 10 minutes of a strong defensive and transition game. Before then, the Terps found themselves trailing after 10 minutes in five of their first seven games.

“We was a little bit faster,” Cowan said Tuesday about Ayala’s impact in the starting lineup against the Golden Eagles. “On defense, we was able to switch a lot more, which got a lot of people out of their offense.”

Turgeon opted for the same starting lineup in Wednesday’s contest with Notre Dame, but Maryland slipped back into its habit of early struggles.

The Terps scored just 14 points in the first 15 minutes and were shooting 6-for-23 — including 0-for-10 from beyond the arc. Then, Ayala sunk a pair of layups and knocked down the team’s first 3-pointer of the night.

Maryland converted eight of its last nine shots of the half — including Ayala’s emphatic dunk that preceded Wiggins’ highlight-reel follow-up slam.

“It all started with Eric’s dunk,” Morsell said. “Eric’s dunk got the crowd into it. Aaron’s dunk was impressive, too. But I think Eric’s dunk was what gave us the momentum for the rest of the half and just going into the second half.”

As the Terps pulled away from the Irish in the second half, Ayala continued to have an impact. During an 8-2 stretch that put Maryland up 50-33, Ayala finished a layup, converted a three and assisted Cowan’s triple that capped off the run.

Ayala finished the game with 14 points, five rebounds and — as Turgeon was quick to point out — five assists with no turnovers.

“He was complete tonight,” Turgeon said Wednesday. “And he got us going, making those shots.”

Over the last week, Ayala has made his presence felt in different phases of the game.

In the first round game of the Orlando Invitational against Temple, Ayala scored seven of his 13 points in the final two minutes of the game — including a basket to put the Terps ahead two scores with 27 seconds remaining.

And against Marquette, the Delaware native played a key role with his ability to switch on screens on the defensive end, helping Maryland suffocate Marquette’s offense and springboard the Terps to a fast start.

With the depth on the team, Ayala knows any player could rise to the forefront in any given game and any given moment. Regardless if his announced in the starting lineup, when he sees his chance to help the team, he announces his presence himself.

“It’s a learning experience to put the team first, and not be so selfish and ‘I wanna start,’” Ayala said. “But I ain’t about that. I just wanna win.”