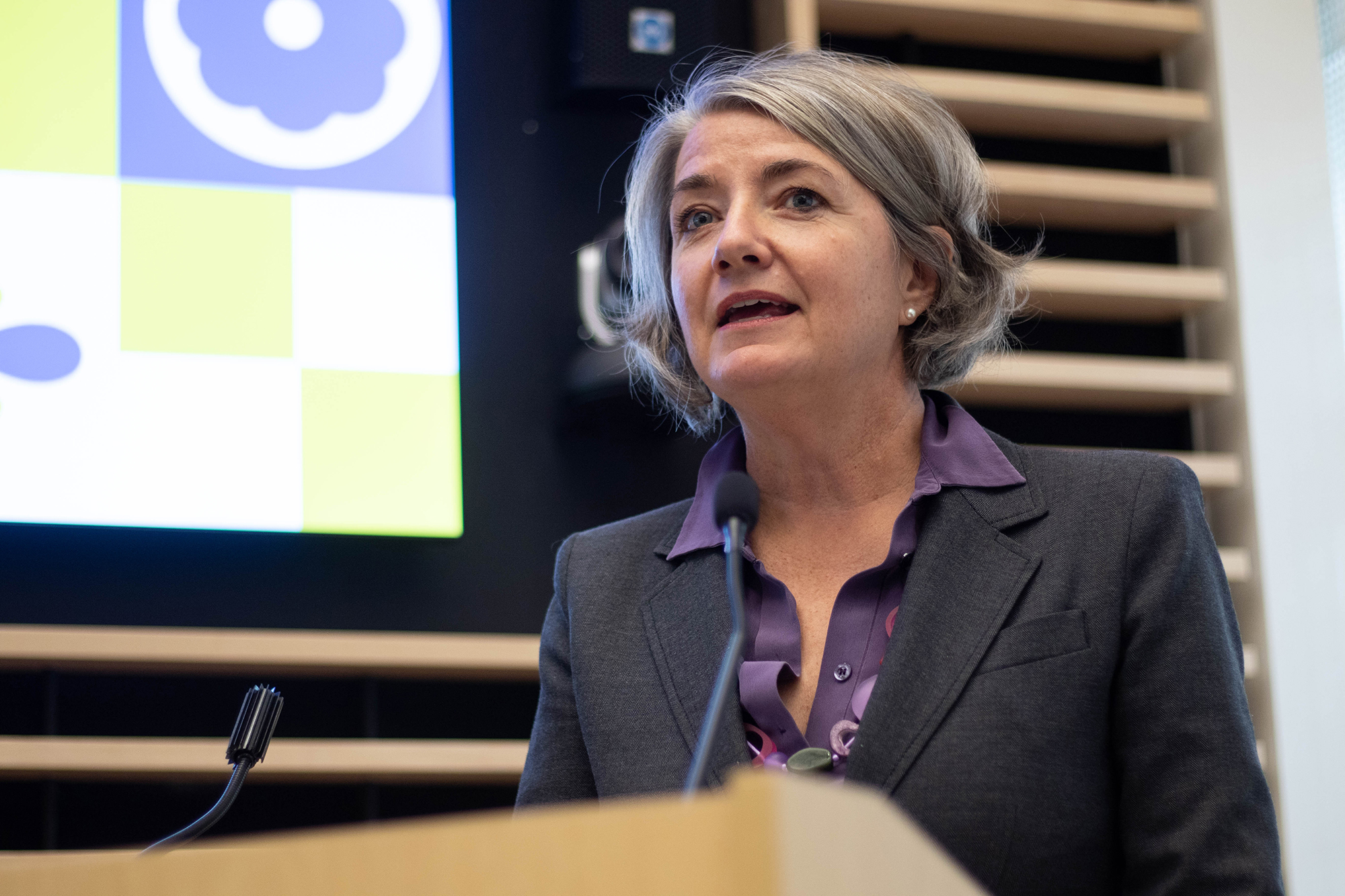 Karin Ulrika Olofsdotter, the Swedish Ambassador to the United States, speaks in front of students in H.J Patterson on Dec. 4, 2019. (Julia Nikhinson/The Diamondback)

By John Bedard
For The Diamondback

Karin Olofsdotter, the Swedish ambassador to the United States, spoke at the University of Maryland on Wednesday as part of the university’s Global Leaders series.

Olofsdotter touched on her country’s relationship with the U.S., as well as several issues particular to Sweden’s place in an increasingly global society. She zeroed in on Sweden’s relationship with migrants — the country has a proud history of acceptance toward foreigners, she said, and has long worked to take in refugees. Around 15 percent of today’s Swedish population was born outside its borders.

The immigration issue, however, has reached its boiling point.

In 2015, as Europe’s refugee crisis was just kicking off, around 163,000 people sought asylum in Sweden. That comprised just about 2 percent of the country’s population, she said, and quickly created issues for local governments.

“You can realize that this put a huge strain on our society,” Olofsdotter said. “We had to put mattresses in railway stations, gyms and schools.”

By the year’s end, the Swedish government temporarily secured its borders. This meant restricting the flow of migrants, contradicting the European Union’s free movement between countries.

Since then, the country’s open-door policy has cracked open. Newly arriving young people and minors are allowed to stay and pursue an education, Olofsdotter said, and they are granted residency permits.

Joseph Scholten, the international affairs associate director at this university, said his office runs the Global Leaders series as a way to rope in speakers of international significance. Hosting Olofsdotter, he said, hits several themes of shared importance between the campus and Sweden, such as immigration, climate change and global leadership.

“When the opportunity arises for us to invite somebody of global significance out from Washington, D.C., then we always will,” he said.

Olofsdotter has served as a diplomat for her country since 1994 — her first overseas assignment was to the Swedish embassy in Moscow. Since then, she’s held positions in Hungary and the U.S. as well as within delegations to the EU and NATO.

In 2017, Olofsdotter was appointed as Sweden’s first female ambassador to the U.S., and lives in the district to this day.

Of course, she’s still very fond of her home.

She noted Sweden’s recent recognition by the Reputation Institute, an analytics firm, as the “most reputable” country in the world. The firm measures country’s global reputations against metrics such as political transparency, corruption rates and lifestyle. This was Sweden’s second consecutive year in first place.

Olofsdotter mentioned Sweden’s strong waste management system, too, and that 99 percent of the country’s trash is recycled. Sweden is the 15th largest foreign investor in the United States, and is home to Spotify, H&M, Volvo, Minecraft and IKEA.

“IKEA, of course, [is] maybe the best promoter of Swedish values there is,” she said, remarking on the company’s progressive work on vacation plans, equal leave for new parents and labor laws.

Thomas Walker, a senior anthropology and government and politics major, said he attended the event for extra credit. However, he said he was pulled in by what looked like an interesting topic.

“Honestly, she seemed very jarred by anything that was, like, jump-started by Trump,” he said. “It seemed like she has some sentiments about the current administration that she didn’t necessarily want to share.”

In 2017, the Washington Post reported Olofsdotter said the United States is an “amazing, frustrating place.” She clarified her remark after the event by explaining her disappointment with the nation’s withdrawal from the Paris Climate Agreement, and said the world needs the U.S.’ help in cleaning up the environment.

Similarly, she said the administration’s questioning of multilateral organizations like the United Nations, and further withdrawal from other international treaties, hurts small countries like Sweden.

“We don’t have the power ourselves to be so vocal,” she said. “We need you.”