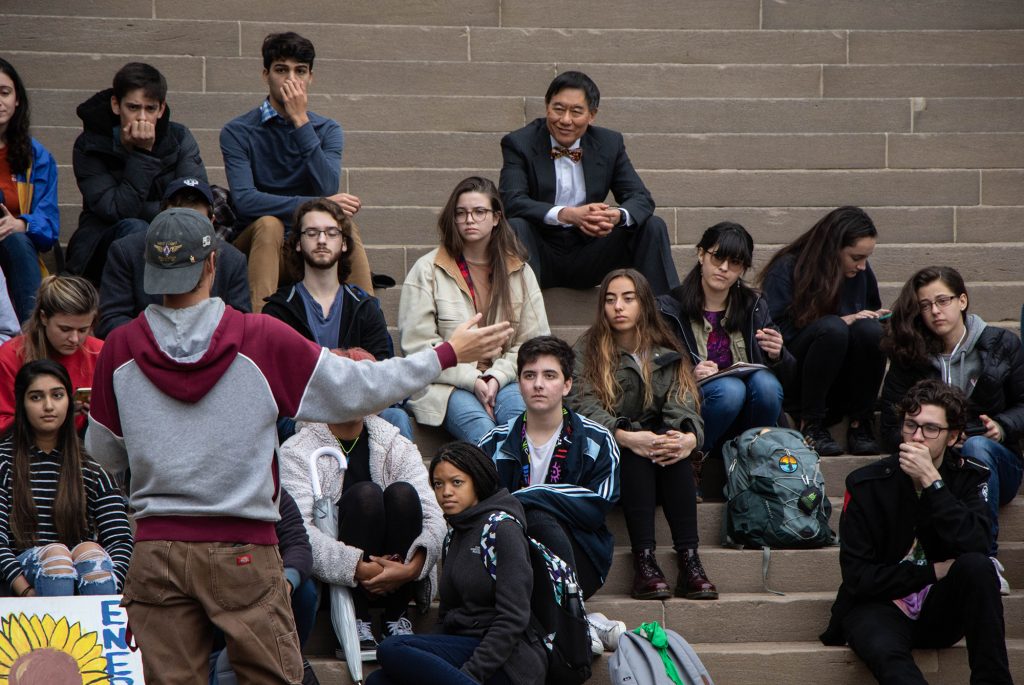 Kicking off what University of Maryland environmental activists hope will be a weekly demonstration next semester, about 40 students gathered at the steps of the school’s administration building Nov. 22 to raise awareness for climate change.

In the first “Terra-Teach-In” — hosted by the university’s Sustainability Cooperative and environmental student organization Fossil Free UMD — student leaders addressed the audience, sharing projects their groups are organizing and calling upon administrators to take action.

Staring up at the gathered crowd from the sidewalk, senior Max Skoglund stressed the demonstration’s importance.

“It’s not just students that need to be educated on issues, but I think [the] administration also needs to be further educated on the reality of climate change,” said Skoglund, the communications chair for SCoop. “Once you know all the facts and the urgency of the issue, you know that you have no other option but to fight for our future.”

About 10 minutes into the event, university President Wallace Loh exited the administration building and sat down on its steps. He listened as Skoglund laid out a series of demands for the university.

The activists want a university sustainability general education requirement, the school to end the direct use of fossil fuels and the University System of Maryland to divest from the fossil fuel industry, Skoglund told Loh and the gathered crowd.

“[The] combination would really make Maryland stand out as a leader in trying to combat climate change, and I think would inspire other universities to follow,” he said.

[Read more: These UMD students are trying to minimize excess trash on campus]

Students also want the campus to be powered by 100 percent renewable energy. The university currently has a contract with a natural gas plant located behind the service building on Route 1.

Katherine Rush, the MaryPIRG campaign coordinator for Fossil Free UMD, said that she understands relying on renewable energy may be more expensive, but that the switch is necessary.

“Converting to clean energy is critical for our planet’s survival and future,” the junior environmental science and policy major said. “We cannot afford to take no for an answer.”

Some students, such as Fossil Free UMD organizer Reese Barrett, appreciate administration’s efforts to listen to their concerns; Fossil Free UMD has met with the Office of Sustainability, she said.

Sasha Kahn, a member of the Student Government Association’s Sustainability Committee, described a different experience with university officials. Kahn said the group has received pushback from administrators regarding its attempts to cement a sustainability general education requirement.

While hundreds at the university participated in September’s worldwide climate strike, Skoglund said holding weekly teach-ins would allow students to participate in the movement while keeping up with school.

“As college students, I would love to stand in solidarity with this action, but it doesn’t make much sense for us to be skipping classes when we’re paying for them,” he said.

Still, Barrett and other leaders encouraged students to attend an upcoming climate march on Dec. 6.

“Now is a really critical time,” the freshman chemical engineering major said. “People are starting to get really nervous about what climate change is going to look like for our planet.”

Toward the end of the event, Sustainable Ocean Alliance president Maya Zambrano-Lee explained the group’s waste management program, which aims to increase the number of waste bins on campus.

She also highlighted the movement’s urgency: the fates of entire nations hang in the balance. Indeed, Maldives, an island country located southwest of Sri Lanka and India, has already seen an increase in intense rainfall and flooding, cyclonic winds and storm surges, according to the World Bank.

Still, the senior environmental science and policy major encouraged the crowd not to despair.

“It’s also really important to remember there is never — in any case, under any circumstances — reason to give up hope,” she said.