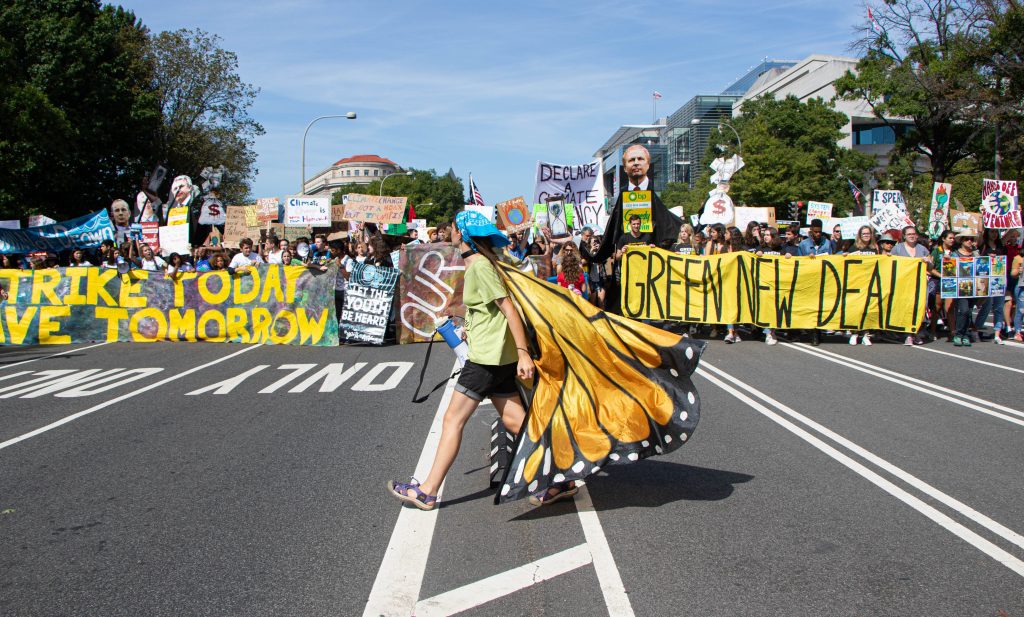 Maya Florian had never marched with a protest before. She’d never taken part in a rally, sit-in or any other type of social justice movement.

But on Friday, rather than sit for her calculus exam or jot down notes on chemistry or plant science, Florian hoisted a handmade sign above her head and added her voice to thousands of others in downtown Washington, D.C. — and millions around the globe — as she called upon her elected officials to do more to fight climate change.

“I didn’t know what to expect, but it’s mind-blowing,” the University of Maryland junior said, as she peered over a sea of people pouring into John Marshall Park.

In the morning’s slight chill, Florian gathered with more than 100 other students outside of McKeldin Library. The brick plaza was crowded with poster board and cardboard signs for the Global Climate Strike — some held by newcomers to social justice, others by seasoned activists who knew what it was like to be marched out of protests by police.

But the crowd was united by a burning frustration that bordered on panic for some — that politicians and people in charge at their university aren’t doing enough in the face of a steadily warming planet.

“I want to ask this university and everyone involved in the administration, what side are you on?” sophomore Emily Fox called into a megaphone, standing beside the Testudo statue. “If you care about us, stop investing in fossil fuels and invest in a sustainable future for your students instead.”

Back in 2016, a University System of Maryland Foundation committee started looking into a proposal, created by the student group Fossil Free MD, to divest from fossil fuels. While activists acknowledge the university has made some progress, the sustainability community on campus is still calling for the school to end its financial holdings in the fossil fuel industry three years later.

Amelia Avis, a public policy graduate student, sported a shirt made in 2016 to support this fight. Once sustainability director for the Student Government Association, Avis is now an organizer for the UMD Sustainability Cooperative — a group of environmentally-focused clubs on the campus that created a website to build awareness for the climate strike among the student body.

Along with calling for the university to divest from the fossil fuel industry, on its website, SCoop also demanded that the university end its use of natural gas and introduce a sustainability education requirement for all incoming students.

“There is a lot more work that needs to be done, so I’ve continued to wear this shirt,” Avis said, pushing her bike along the shady path to the Main Administration Building as marchers streamed to the College Park Metro.

Passing cars beeped in support of students as they waved their signs and cheered during the mile-long walk to the metro. As he zipped past the long line of protesters, one man leaned on the horn, screaming down College Avenue.

Annabelle Arnold, administrative chair for the cooperative — often called SCoop — smiled as the drivers honked. Climate change depression is very real for her generation, she explained, especially for people who study environmental science. Class is disheartening, and even club meetings can be discouraging sometimes.

“In events like this, when we rally together, it’s almost like putting all of these negative energies together to get something really positive in return,” she said. “While it’s scary and it’s really sad to learn about what’s happening, the fact we’re all acknowledging it and trying to show our support on something like this together is really empowering.”

The crew crowded into the metro station, their chants echoing throughout the underground. In one metro car, sophomore Lily Byrne sat with two of her friends as they hurried to finish coloring their signs before arriving in D.C.

She’s a part of a MaryPIRG campaign pushing to empower workers at this university, she said — and climate activism goes hand-in-hand with this goal. As public budgets are strained by reacting to weather crises caused by climate change, there’s going to be less to go around for people who depend on state funding for salaries.

“If unions aren’t working toward that issue, or aware of that issue or organizing around that issue, then in the future, there’s going to be a lot of issues with people losing their jobs because of climate change,” she said, even if only indirectly.

The American Federation of State, County and Municipal Employees Local 1072 — the union that represents workers at this university — supported the climate strike on its website. Fox said she spoke with AFSCME about why the movement was important and worked with organizers to send around a statement of support to workers. So far, she said about 50 have signed on.

Members of the working class and people of color have been, and will continue to be, hit the worst by the effects of climate change, Fox said. The Environmental Protection Agency has found that minority and poorer communities are disproportionately affected by pollution.

Fox marched with freshman Margot Bloch down Pennsylvania Avenue, trading a megaphone back and forth. Their chants overlapped with others in the crowd, calling on people “stop denying our planet is dying” and demanding climate justice now.

Bloch is no stranger to social movements. She grew up going to protests with her mom, with whom she got arrested during Supreme Court Justice Brett Kavanaugh’s confirmation hearing. Attending rallies gives her a sense of hope, she said, and it’s exciting to see so many new protesters in the mix.

“You come to so many, and it’s like, what’s changing? What is being done?” she said.

The mass of marchers eventually made its way to the Capitol and gathered around a stage to listen to performances and speeches from youth activists, representatives and indigenous people.

Junior Alejandro Valdes watched from the crowd. Dressed in an open kimono, flashy pants with a fanny pack around his waist, Valdes drew some glances — and lots of smiles. He beat a drum hanging around his neck, bobbing his head to the beat.

Systemic change needs to happen fast, Valdes said, or else “shit’s gonna hit the fan.” Still, seeing so many kids at the strike filled him with hope and reminded him that it wasn’t just up to his generation to fight climate change.