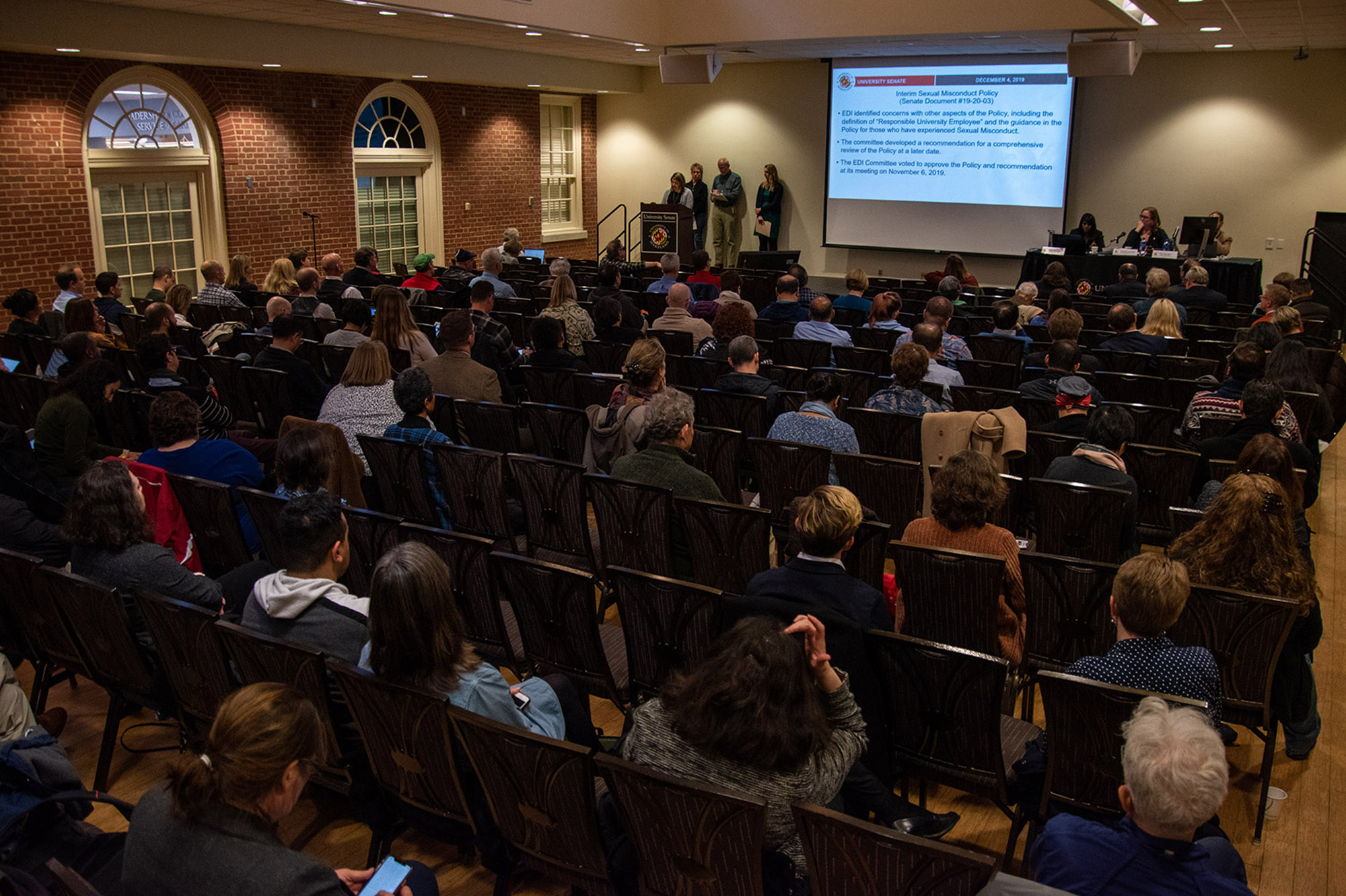 Committee Chairs speak about revisions to Title IX policies at the University Senate meeting in the Atrium at Stamp Student Union on Dec. 12, 2019. (Joe Ryan/The Diamondback)

The University of Maryland Senate approved changes to the school’s sexual misconduct policy and procedures at its meeting Wednesday, in accordance with a new state law requiring the government to fund legal representation for students’ Title IX cases.

In 2018, the Maryland state legislature voted to create a framework for the Maryland Higher Education Commission to cover attorney and legal fees for both complainants and respondents in Title IX cases — but there wasn’t money allocated to fund it until the General Assembly passed legislation to do so last session. The University System of Maryland revised their policy in June to reflect the new law, and required its members follow suit.

University President Wallace Loh sent this university’s policy to the senate for review, asking it to make changes that reflect the new state law. It will be further revised if Education Secretary Betsy DeVos’s proposed Title IX regulation, which offers a stricter interpretation of the 1972 law than the Obama-era guidelines, are officially instituted.

“It is unclear when that guidance will be finalized,” said Equity, Diversity and Inclusion Committee chair Rachel Gammons. “But in this case, it was important to complete these revisions to the university’s policy as soon as possible.”

The revised policy does not allocate any funding by the university. The MHEC will provide the funds to schools, but USM requires that state universities reflect that fund in their sexual misconduct policies.

Stephen Kenny, an undergraduate senator and junior government and politics major, was the only senator to contest the bill during the full body meeting. He questioned whether the policy would address the concerns of survivors of sexual assault, and expressed concern that the fund would offer additional protection to their assailants.

“I understand that this is something that is mandated by state law. Equal access to legal representation certainly is important,” Kenny said. “I just wanted to bring up concerns that were brought to me by victims of sexual misconduct that are going through the process right now. This may be sending the wrong message to them.”

Kenny did not dispute the intentions of the bill, but suggested that the senate needed to include something “rhetorically” so as not to dissuade survivors from taking advantage of the same fund that could protect their assailants.

“At least on the floor of the senate, making sure that the message isn’t entirely one-way and has some supportive elements towards victims of sexual misconduct,” he said. “A message of support and belief of victims is a very important thing to do … and then hopefully it can inform policy going forward.”

“Sometimes what you see is a very unequal process one way or the other,” the senior psychology major said, “where the student who might be more well off might be able to pay for a lawyer, when the other one can’t.”

The last time the university’s sexual misconduct policy was revised was in March 2016, when the senate added language granting amnesty to students who report sexual misconduct that occurred during or near the time of illegal alcohol or drug use.

That same year, the SGA approved a $34 mandatory annual fee for students that would go toward the university’s Office of Civil Rights and Sexual Misconduct.

The committees charged with reviewing the three procedural bills expressed some concerns with the current procedure, such as the role of the associate provost in faculty sexual misconduct investigations and the policy’s lack of language regarding “trauma-informed approaches” to procedure.

Senate chair Pamela Lanford made clear to the body that this was not unusual.

“Down the line, we anticipated additional changes to the policy,” Lanford told the body.

Andrea Dragan, Student Conduct Committee chair, recommended that the senate reviews the impact the policy and procedures could have on the campus.

“The committee remains unsure how effective the new MHEC legal representation fund will be at serving student needs,” said Dragan, a public health graduate student. “Details are still being developed.”