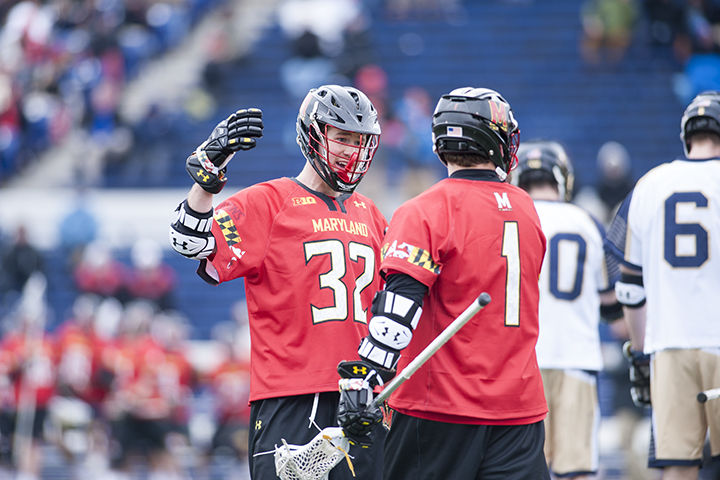 Attackmen Jay Carlson (32) and Matt Rambo (1) celebrate after Carlson scored a goal off an assist from Rambo during the second half of the Terps' 8-1 win over Navy at Navy-Marine Corps Memorial Stadium on Feb. 14, 2014.

Maryland men’s lacrosse was well-represented in the inaugural season of the Premier Lacrosse League, especially on Whipsnakes Lacrosse Club. 20 former Terps were on the Whipsnakes roster to begin the season, highlighted by Matt Rambo, Connor Kelly, Drew Snider and Mike Chanenchuk among others.

The Whips started off hot, sitting at 4-0 and finished the regular season 6-4, which was good enough for the No. 2 seed. After a dominant 15-7 win over Chaos LC in the first round of the playoffs, the Whips were off to the championship to face Redwoods LC. An intense, dramatic final in Philadelphia led to a 12-11 overtime win for the Whips, with Rambo scoring the game-winner.

For as great as the 2019 season was for the de facto Maryland PLL team, there is a good chance we won’t get to see that team again.

In the offseason, Atlas LC captain and PLL co-founder Paul Rabil announced the expansion of the league, adding a seventh team.

On Tuesday, further details about the Expansion Draft taking place in February 2020 were released that put the future of the Whipsnakes Maryland contingent in jeopardy. The six current clubs will be required to submit a roster of 11 protected players to the league offices. The 11 players must consist of 10 positional players and a goalie. Those who weren’t chosen will be put into a pool to be drafted by the expansion team, which is picking 18 players, no more than four from each existing team.

If four players are selected from an existing club, the remaining players will be removed from the pool to be retained by their original clubs. Also, once the seventh team selects players, all seven will need to send 25-man rosters to the league and those not included will be put into the “Player Pool”.

Unfortunately, that means Maryland fans shouldn’t expect to get behind one team for the 2020 season, rather they will have a few. However, you can expect the bigger name Terps to be protected and stay with the Whips.