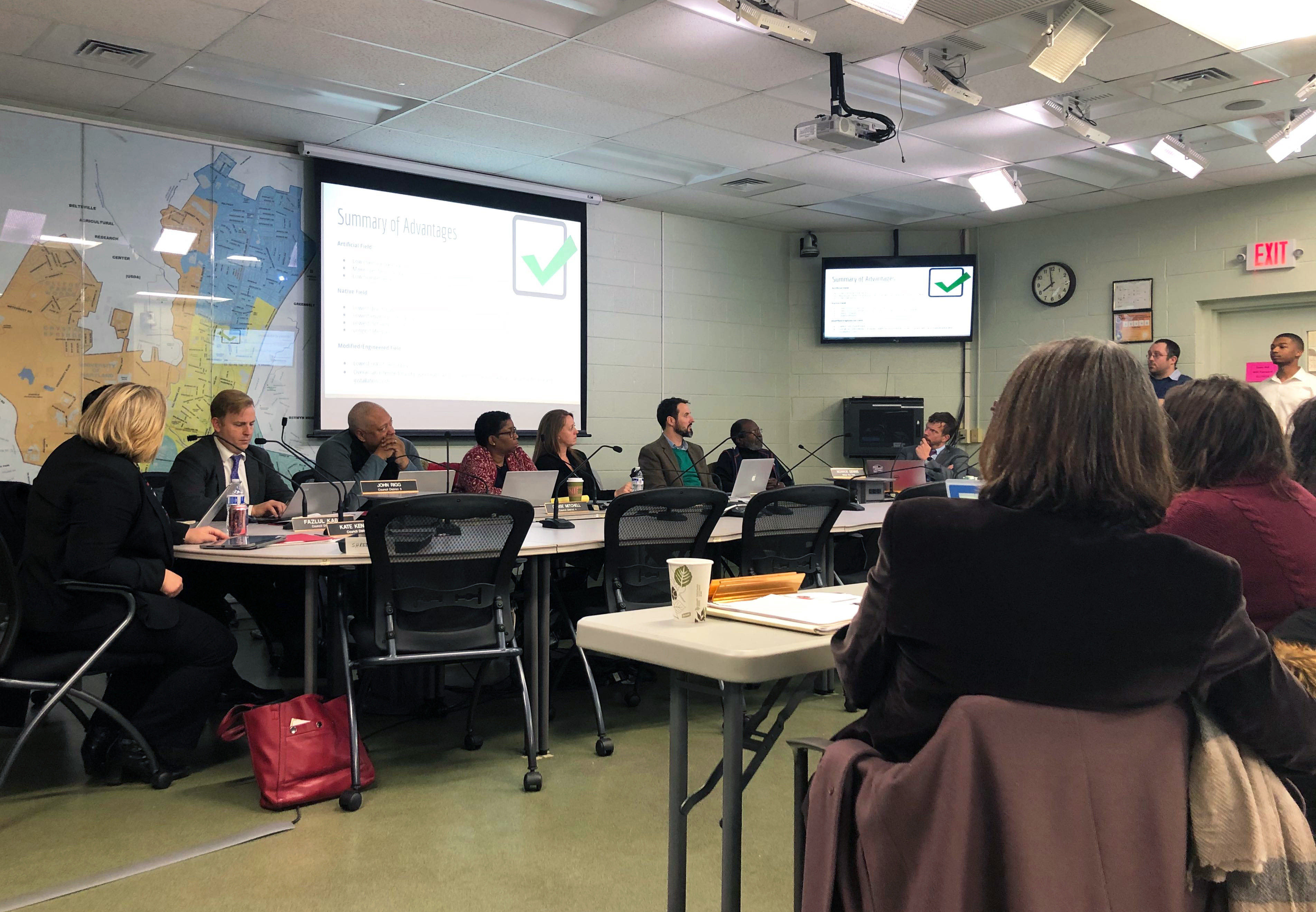 After months of research, a group of University of Maryland students presented its findings regarding different surfacing options for Duvall Field to the College Park City Council on Tuesday.

Last year, the city hired a consulting company to help plan renovations to the park, hoping to finish the project that first had funds appropriated for it over a decade ago. The company recommended resurfacing the field with artificial turf, but many residents disapproved. They brought their concerns to the council, citing potential negative health and environmental ramifications.

And the council listened, deciding to pause the renovation and commission an environmental science and policy capstone group at this university to help them figure out what surface would be best.

Since the start of the semester, the group of eight students has been analyzing the costs and benefits associated with surfacing Duvall Field with three different types of turf: artificial infill, native soil and engineered soil.

At the Tuesday meeting, the group presented council members with the results of its deep dive into the economic, environmental and player safety concerns associated with the three surfaces, though they didn’t recommend an option to the council.

The students created a matrix aimed at helping council members make their decision. It had three columns — one for each field type — and more than a dozen rows rating various attributes of the three fields on a scale of 1-3 for a side-by-side comparison.

However, there were no column totals to indicate which the best field option would be.

“It’s up to you guys — the stakeholders — to decide which categories are the most relevant to you,” said Brandon McIntyre, a member of the capstone group.

Duvall Field — which currently features native soil and Bermuda grass — experiences problems with drainage due in part to the clay-rich soil it sits upon, the students told the council.

That’s where a modified soil field could help, the group said. Natural grass that sits on top of an engineered mixture of soil and sand tends to drain effectively — so effectively, in fact, that the cost of irrigating such a field could go up, according to the team.

Artificial turf surfacing would also alleviate the drainage issues facing the field and make it more durable and less costly to maintain. However, the group said, artificial grass comes with its own set of challenges.

Using this material could leave residents more susceptible to joint and bone injuries, since it catches shoes differently. Furthermore, it can heat up to 170 degrees Fahrenheit on an 80-degree day, which would leave athletes vulnerable to heat-related illness or injury.

Council members had the opportunity to ask the students questions after the presentation.

District 1 Councilman Fazlul Kabir asked if the total cost of implementing, maintaining and replacing an artificial infill field would be similar to that of a natural field, to which McIntyre responded — maybe.

“It’s pretty comparable but it also depends on the situation,” he said. “Price range depends on the number of workers [hired] … and how often the field is actually used.”

Meanwhile, John Rigg, a District 3 councilman, wanted to know if there was a way to compare the longevity of the three options.

“If we want to think about increasing the usage of Duvall Field — and I think we do, since we’ve invested a lot in that field,” Rigg said, “then I think we also have to consider durability, and year-round durability.”

Rigg was also interested in why the students highlighted the injuries unique to artificial turf when their presentation showed that more people are injured playing on natural grass.

On average, injuries experienced on natural grass were more ubiquitous but less serious than those seen on artificial turf, one student explained — a sprained ankle might keep an athlete out of games for part of a season, but a concussion could take them out of play altogether.

While the presentation and discussion only lasted for about an hour, council members didn’t reach a decision on Tuesday.

Council members will have the chance to weigh turf options again when they convene for a work session Jan. 7, and the students are set to send the council a written report detailing their findings within the next week.

“Thank you so much. This is great,” Wojahn said. “Very well researched and very thorough, lots of information for us to digest.”