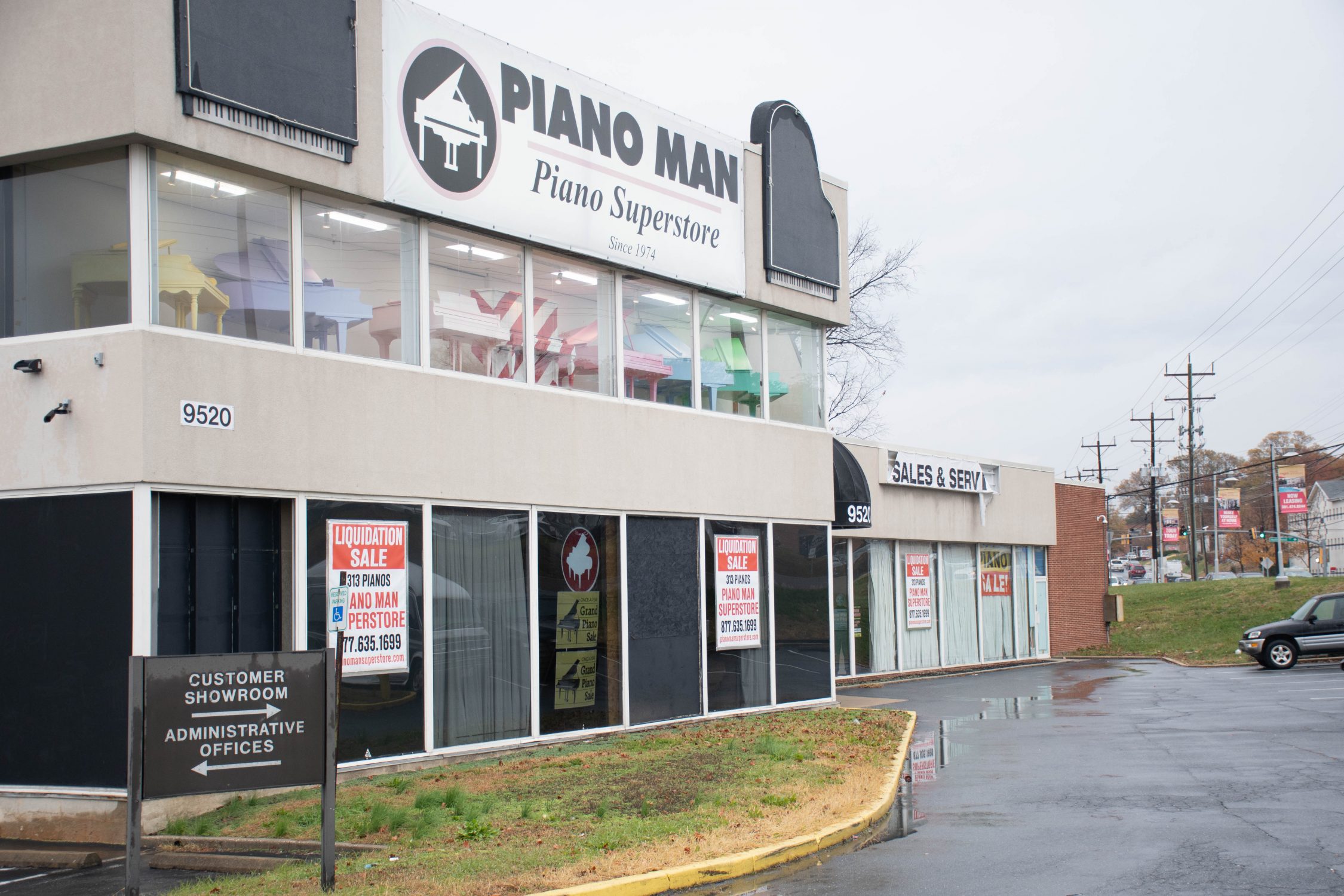 The Piano Man Superstore located on Route 1 in College Park sees between 15 and 30 customers per month, its founder said. (Jonathan Tercasio/For The Diamondback)

By Jonathan Tercasio
For The Diamondback

College Park has seen significant economic development in recent years, but for Nick Margaritas, a businessman who’s been in College Park since 2012, thriving in the more developed area is proving to be a challenge.

Due to low customer turnout, Margaritas, the founder of Piano Man Superstore, said he’s been planning to move out of his Route 1 facility for more than five years. Despite signs of economic prosperity — such as a growing real estate market and an increase in median household income — in the city, the store is struggling to sell pianos and find someone to lease its 30,000 square foot space.

Margaritas said his store is operating on a month-to-month basis and gets anywhere between 15 and 30 customers per month. He’s trying to relocate to a smaller facility in Rockville, where he said the population — an older, higher-income demographic — is more suited for the acoustic piano market.

“The problem is, when you go from 30,000 square feet to 10,000 square feet, it makes it difficult,” he said. Less space means fewer pianos on display, so Margaritas can’t move until more pianos are sold.

The influx of real estate developers in the area has a twofold effect on local businesses: They bring increased foot traffic to stores, but they also drive up rent prices, said Ryan Chelton, the economic development coordinator for the city.

If a new tenant were to rent the facility before he can sell enough pianos to move, Margaritas said he would have to either sell the extra pianos by delivery or donate them.

But prospective tenants aren’t signing leases, Margaritas said, because of the cost to redevelop the building. Updating the approximately 50-year-old building, which would involve installing new heating, plumbing and air conditioning, could cost a tenant up to $100,000, Margaritas said.

Chelton said the property where Piano Man is located would serve best as a storage facility because the building has a lot of square footage but lacks a lot of parking space. However, a new storage space is already being constructed nearby, he said.

Margaritas’ struggle to sell pianos in College Park extends beyond the inability to secure new tenants. He said the demographics of the city, which primarily consists of college-aged people with reported 2018 incomes of less than $15,000, aren’t ideal for high-ticket piano sales.

“The typical family who is going to start their children on the piano is not going to buy an acoustic piano right off the bat,” said Mayron Tsong, an associate professor of piano at this university.

She noted the shift from acoustic to electric keyboards is a “very attractive” option for consumers. Compared to acoustic pianos, electronic keyboards are more standardized, can be sold more easily and do not bear the costs of tuning and restoration, she said.

In the 1980s, when Margaritas said the piano industry was at its best, he owned a chain of piano stores in the D.C. area.

“The ‘80s were so good for pianos that people would buy pianos on their way … home from buying pizza,” Margaritas said. But when the recession hit, the piano industry died, he said.

“I’m not surprised that there’s a decline in demand,” said sophomore neurobiology and physiology major Michelle Chen, who has been playing the piano for 15 years. “It’s probably more likely that people who want to learn piano will buy a keyboard on Amazon or something similar instead of buying an entire piano.”

Today, Margaritas owns just two Piano Man stores — one in College Park, and one in Catonsville. To sell enough pianos to move into the Rockville facility, he has sales ranging anywhere from 10 percent to 50 percent off, depending on the models.

“I’ve had three store closing sales in seven years,” Margaritas said. “I will somehow come up with some way to get rid of these pianos that we don’t need.”