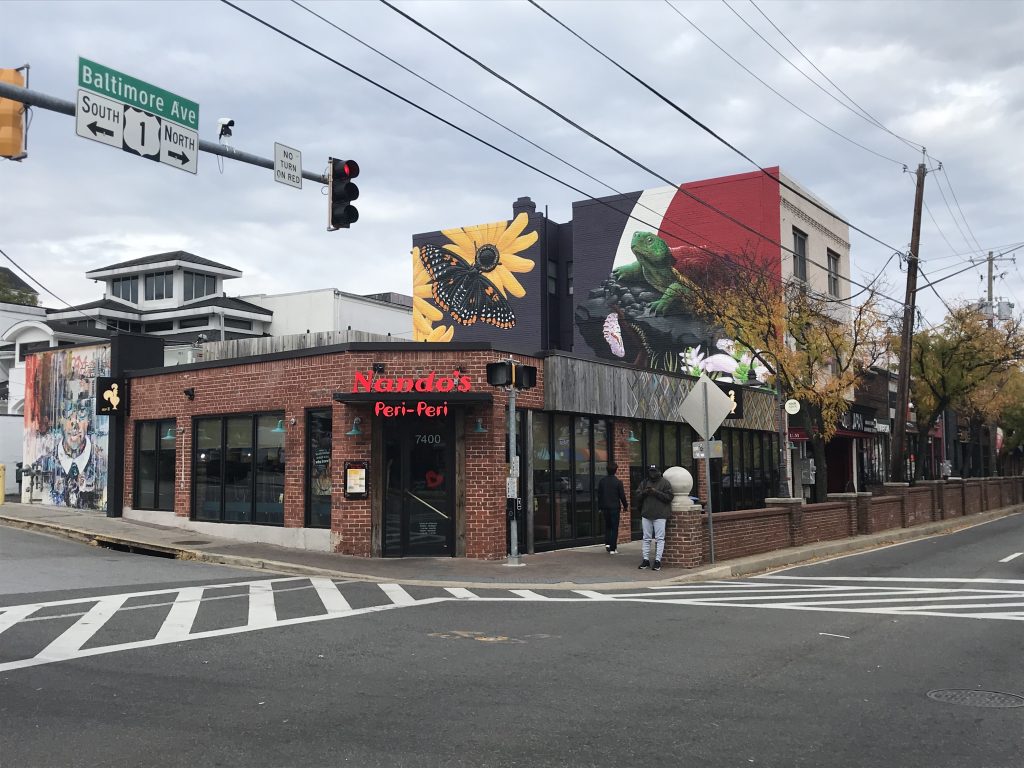 Two Hyattsville artists are behind the design of this new mural on Route 1, which features a diamondback terrapin, black-eyed susan and checkerspot butterfly. (Colleen Neely/ For The Diamondback)

Two local artists completed a new mural above the Qu Japan restaurant — near Nando’s Peri-Peri and Terrapin’s Turf — in the heart of downtown College Park.

Artists Cory Stowers and Jason Philp collaborated on the mural’s design, which features a diamondback terrapin, a Baltimore checkerspot butterfly and a black-eyed Susan.

They wanted to showcase the terrapin in “a more natural way than you tend to see it on campus,” Stowers said, while also honoring the University of Maryland’s efforts to protect the Baltimore checkerspot butterfly, Maryland’s state insect.

“The checkerspot is this important, symbolic pollinator [which] is being protected by the terrapin in a kind of symbolic way,” Stowers said.

Eric Olson, the executive director of the College Park City-University Partnership, welcomed the addition of the mural.

“Art is a visual, but it’s also going to be for the mind,” he said. “Art breaks up what you see, the monotony of just buildings. It creates a certain vibrancy to a place.”

Local officials also expressed hope that the mural will have a lasting impact on the city.

“The mural, I hope will be an effort to indicate that the city is trying to be constantly attentive to the environmental aspects [of the city],” said District 2 Councilman Monroe Dennis.

Both Stowers and Philp have a long history of creating public art in D.C. and Maryland and have worked together for almost two decades. Stowers is the cofounder of the graffiti group Double Down Kings, which began in Hyattsville in 1994.

[Read more: UMD and Bowie State’s unity mural is on display at the State House]

“The theme throughout many of our works is just the idea of celebrating and reinforcing traditional identities,” Stowers said.

Work began on the mural, which is named “Pyschophily,” or pollination by butterfly, in early October. It was supported by a grant from the Prince George’s County Redevelopment Authority and a matching grant from the city of College Park.

Philp said he hopes the mural will serve as a “landmark,” that identifies College Park and indicates to people traveling back to the city that they are almost home.

“I would love to paint more murals in College Park. It’s like my hometown, so I always love to do things here,” Philp said. “As far as the future goes, I would love to just beautify the city as much as I can.”