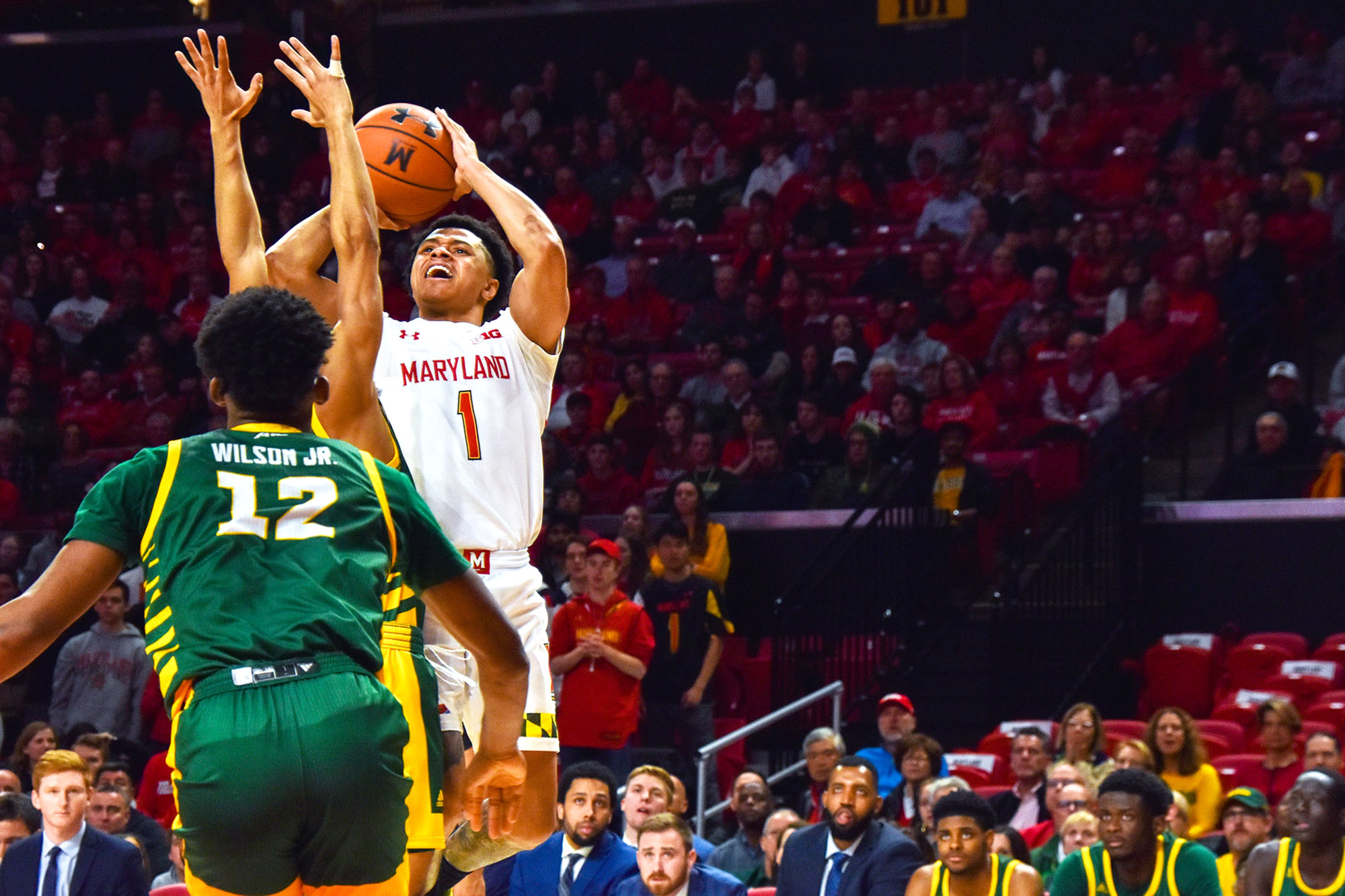 Guard Anthony Cowan Jr. pulls up for a jumper during Maryland's 86-63 win over George Mason at the Xfinity Center on Nov. 22, 2019. (Joe Ryan/The Diamondback)

Entering Sunday’s Orlando Invitational championship game, Marquette men’s basketball guard Markus Howard drew all the attention. The notoriety was warranted; Howard had just posted a combined 91 points to break the three-game tournament’s scoring record — and he needed only two games to do it.

Maryland guard Anthony Cowan didn’t match those gaudy numbers in his team’s first two games of the tournament. But the senior still led his then-No. 5 Terps to the title game with a pair of standout performances.

Cowan averaged 25 points over his team’s first two games to set the stage for the final against the Golden Eagles — which featured a showdown between him and Howard, a rare duel between two marquee senior guards.

And, in the end, it was Maryland’s dynamic senior guard — not Marquette’s — smiling while posed next to Mickey Mouse to accept the tournament’s Most Valuable Player honors before joining his team in hoisting the Orlando Invitational trophy.

“Anthony really stepped it up,” coach Mark Turgeon said. “He’s making all the right decisions, offensive and defensively. So the game’s just coming to him.”

On the ESPN broadcast’s postgame interview, Cowan acknowledged he took the matchup with Howard personally. Still, he remained focused on playing within the game plan.

That game plan placed emphasized neutralizing Howard as much as possible. Guard Darryl Morsell, the team’s best perimeter defender, harbored the primary defensive responsibility on the nation’s leading scorer, but other players got involved as well.

Cowan was one of four players — along with Morsell, guard Aaron Wiggins and forward Donta Scott — who combined to hold Howard to six points on 1-for-12 shooting, including 0-for-6 from three-point range, just two days after he scored 51 points against USC.

“My goal was just to make it tough for him. I knew what he was capable of coming into the game with his other two outings in this tournament,” Morsell said. “But it was a complete team effort … Everybody was locked in, dialed in, into the game plan, and we executed and won.”

On the other end of the floor, Cowan was a difference maker once again. The Bowie native scored 22 points to lead the Terps in scoring for the fourth consecutive game, also adding four assists with just one turnover.

One of those ways is to lead by example. So in big moments against the Golden Eagles, Cowan was the obvious choice to step into the forefront and make clutch plays.

With the first half nearing its end, Cowan waved off a teammate about to set a screen, opting for an isolation play. The shot clock was about to expire, and the senior rose up from well beyond the three-point line at the top of the key and buried the shot to put his team up 21 points at the break.

In the second half, with Marquette in the midst of a 13-2 run that cut the Terps’ lead to 13, Cowan bailed Maryland out of a bad offensive possession with a deep trey despite defenders in his face. On the ensuing Golden Eagles’ possession, Cowan poked the ball free from Howard to force a steal and create a transition opportunity that ended with a feed to Scott for the fastbreak layup.

“I’ve got a really competitive group of guys. So, you can say it starts with Anthony because he’s a senior,” Turgeon said. “I know my guys, and I knew they were going to step up.”

Turgeon’s star guard remained on the floor following the final buzzer to celebrate with his team and accept his hardware. Meanwhile, Howard left the HP Field House court well short of the 29.3 season average he entered with.

“Cowan gets the ball down the floor faster than anyone we’ve seen to this point,” Marquette coach Steve Wojciechowski said. “He’s obviously a great guard — one of the top guards in the country.”