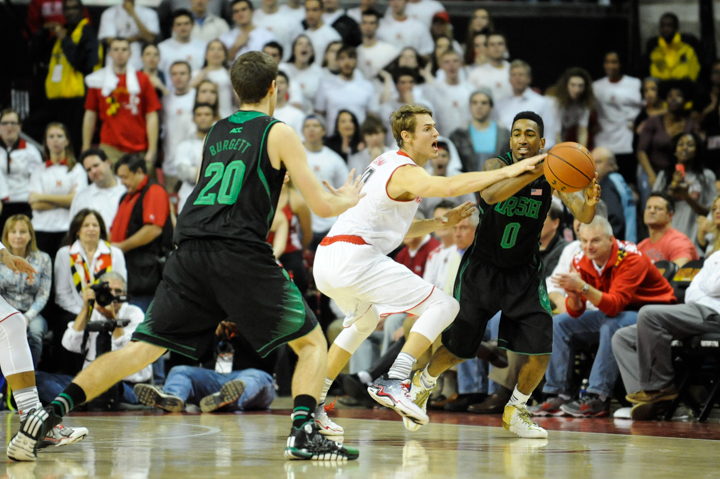 Forward Jake Layman defends a Notre Dame guard, forcing a pass late in the second half when the Terps beat the Notre Dame Fighting Irish 74-66 on Jan 15, 2014 at Comcast Center.

Best Maryland Moment: January 27, 1979- No. 1 Notre Dame came into College Park looking to continue its recent dominance, being ranked atop the country for two weeks with a seven-game win streak. The Terps had other ideas, knocking off the Fighting Irish 67-66, thanks to a three-point play from senior forward Larry Gibson with just one second remaining in the contest.

Best Notre Dame Moment: December 7, 2002- Fresh off a national championship, Maryland came into the 2002 BB&T Classic 3-1, ranked No. 9 in the country. Having lost for the first time on the season to No. 10 Indiana four days earlier, The Terps were handed their second straight loss, as the unranked Fighting Irish won 79-67. Torin Francis led the way for Notre Dame, scoring 20 points as the Irish improved to 7-1 on the season.