Studying Nemo: What these UMD researchers learned about how clownfish see 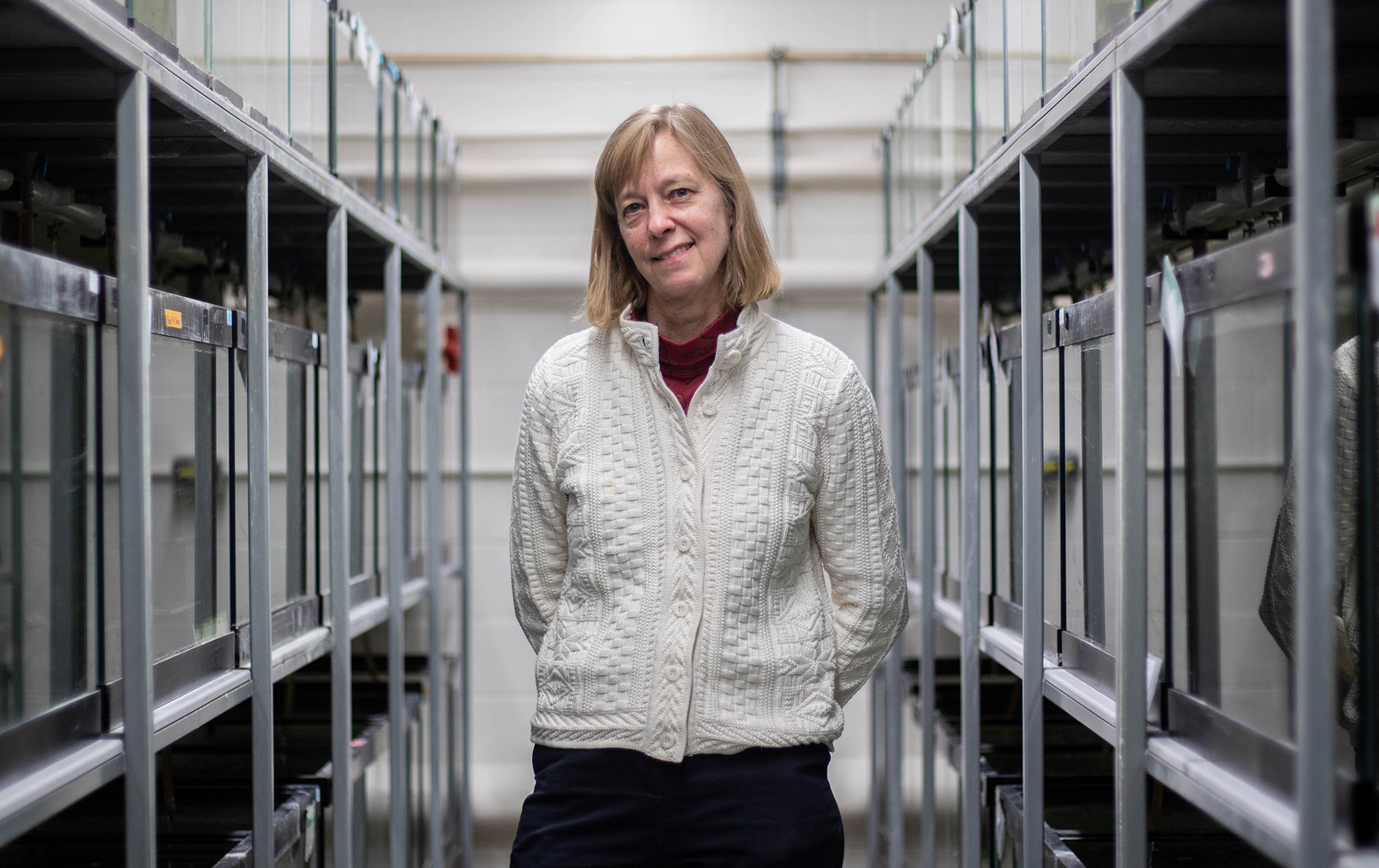 Dr. Karen Carleton stands among the fish tanks of the fish room in the Biology-Psychology Building. Carleton is among a group of researchers who discovered that anemonefish — the cousins of clownfish — have special visual talents. (Julia Nikhinson/The Diamondback)

The Great Barrier Reef, located just off the coast of Australia, is teeming with an array of aquatic animals, from molluscs to sea turtles to anemonefish — the iconic orange and white striped fish that stars in Disney’s “Finding Nemo.”

The real-life equivalent of fish like Nemo — and his dad, Marlin — are central to University of Maryland professor Karen Carleton’s most recent research project, which delves into the animals’ visual systems.

“[It] makes your science very relatable to people,” said Carleton, a biology professor. “Immediately they can get the things that Nemo does. Everybody understands, ‘Oh, there are eggs,’ ‘Oh, they’re in the anemone,’ ‘Oh, there are these barracudas.’”

Carleton — along with Brian Dalton, a postdoctoral researcher at this university, and a team of researchers from The University of Queensland in Australia — conducted the study, published in Scientific Reports earlier this month.

[Read more: A petition calls for an end to plastic straws at the University of Maryland]

Carleton’s biggest takeaway from the investigation was the variability that exists across visual systems in anemonefish, also known as clownfish. Each element of the fish’s retina, the lining that senses light in the eye, can be specialized to perform tasks geared to the animal’s survival, she said.

Carleton said she researched the genes that fish used to see, and found that the anemonefish expressed an extra gene that allowed them to see right in front of their noses.

Sara Stieb, a researcher at the University of Queensland and lead author on the paper, said the research started at Lizard Island — located along the Great Barrier Reef — in 2015 when they first started collecting anemonefish.

“Catching them, you feel a bit like the devil, honestly,” Stieb said. “They’re super cute and everybody, including I, think we connect them with Nemo.”

Stieb said that Lizard Island is the “reason why we love” the research project. In order to get there, she said, visitors must take a plane, a ride which offers aerial views of the reef.

Carleton, who last visited the reef in 2016, said that studying fish is not as simple as sending them away from their natural habitats into the lab. It’s crucial, she said, to observe fish in the wild, since their visual systems can change in a different environment.

“It’s just wonderful to be kind of out there on the edge of the Earth in some respects, seeing these animals in their natural habitats,” Carleton said. “There’s just so many species to see.”

Brian Dalton, the post doctoral researcher involved in the project at this university, said that studying fish like Nemo makes for some good jokes. It also makes his research more approachable, he said.

“It makes it a little bit easier for [the general public] to get interested in what you’re doing,” Dalton said. “You don’t have to say quite as much when you talk about Nemo.”

But the reefs, Carleton said, are being challenged by a changing climate. According to the National Oceanic and Atmospheric Administration, warmer water temperatures can fuel coral bleaching, which is when coral turns white.

Pollution, runoff, low-tides and increased temperature are among the main contributors to coral bleaching, according to NOAA’s website.

“All of us who study coral reefs are desperately fighting for people to pay attention to climate change,” Carleton said. “These habitats are so precious and so fragile and it takes them hundreds of years to recover when they have a high-temperature bleaching event.”