After she was pulled from a space expedition, UMD alumna talks moving forward 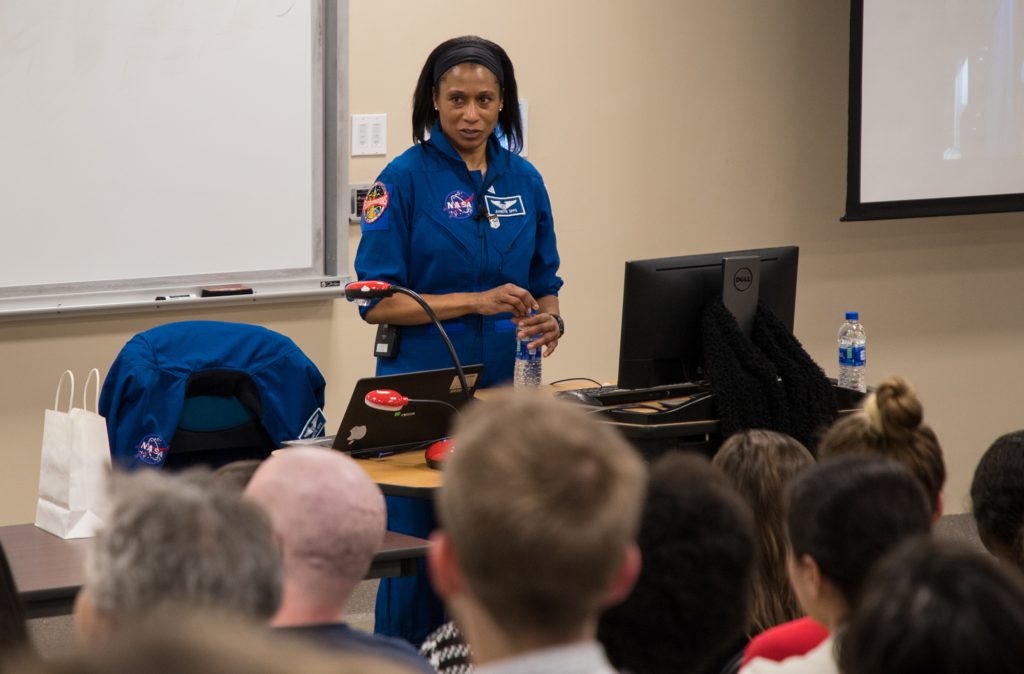 She underwent months of training, including learning how to survive in the event of a crash landing, and the Russian language to communicate with fellow crew members. But after about a year of preparation, Epps received some unexpected news.

NASA replaced her on the spaceflight with a backup flight engineer, a move she said came without warning or reason.

Despite this unexpected turn, Epps pushed forward — and she hopes to finish her mission and get to space in a couple years.

Epps shared this story and recounted some of her other experiences from over a decade at NASA Monday night in Glenn L. Martin Hall.

Epps earned her doctorate in aerospace engineering in 2000 from the University of Maryland, where her skills and drive to become an astronaut were immediately apparent to her doctoral adviser, Inderjit Chopra.

He said she would frequently work after hours with him on research. That level of motivation, he said, helped her get to her current position and could inspire future astronauts to reach similar heights.

“For her, a normal person, to get an opportunity like that shows how hard she’s worked,” Chopra said. “The next time that she goes into space or to the moon, she can be a big celebrity, and anyone can see that and be motivated to reach that level.”

Epps’ story resonated with aerospace engineering doctoral student Thomas Leps. Over the summer, Leps applied to be an astronaut, and though he was rejected, he said he was inspired by Epps’ experiences to keep trying.

“It’s promising that an aerospace engineering Ph.D. from Maryland got selected,” he said. “I look forward to trying to get in there again.”

Epps worked at Ford Motor Co. for two years and as a technical intelligence officer at the CIA for more than seven years before becoming an astronaut. She was selected as an astronaut candidate in 2009 and qualified after two years of intensive training.

She said her astronaut training continues today, as she is often forced into difficult situations so she can be prepared for the hazards of space. In one exercise, Epps said she lived deep underwater for nine days as they simulated the extreme changes in pressure she would experience in space.

While the exercises were taxing, she said those trainings helped build her teamwork skills, something she said is vital to any aspiring astronaut.

“You could be the smartest kid in the room, but if you’re not able to get along with others, you won’t be able to go very far at all,” Epps said. “When you can commiserate together and go through something extreme together, you will build a relationship, and you will always have that connection.”

Since she was removed from the International Space Station expeditions in 2018, Epps has continued to work hard toward her first spaceflight. She went on a cave expedition in Slovenia in September to build camaraderie and simulate navigating the surface of the moon, an experience she said was eye-opening.

While she hopes to make the trip to the space station soon, Epps said she is looking to future astronauts to advance American knowledge and settlement of space.

“There’s going to be a lot of research that needs to be done,” Epps said. “We have to add to this story. You guys are the generation to get us back to the moon and keep us on the moon.”