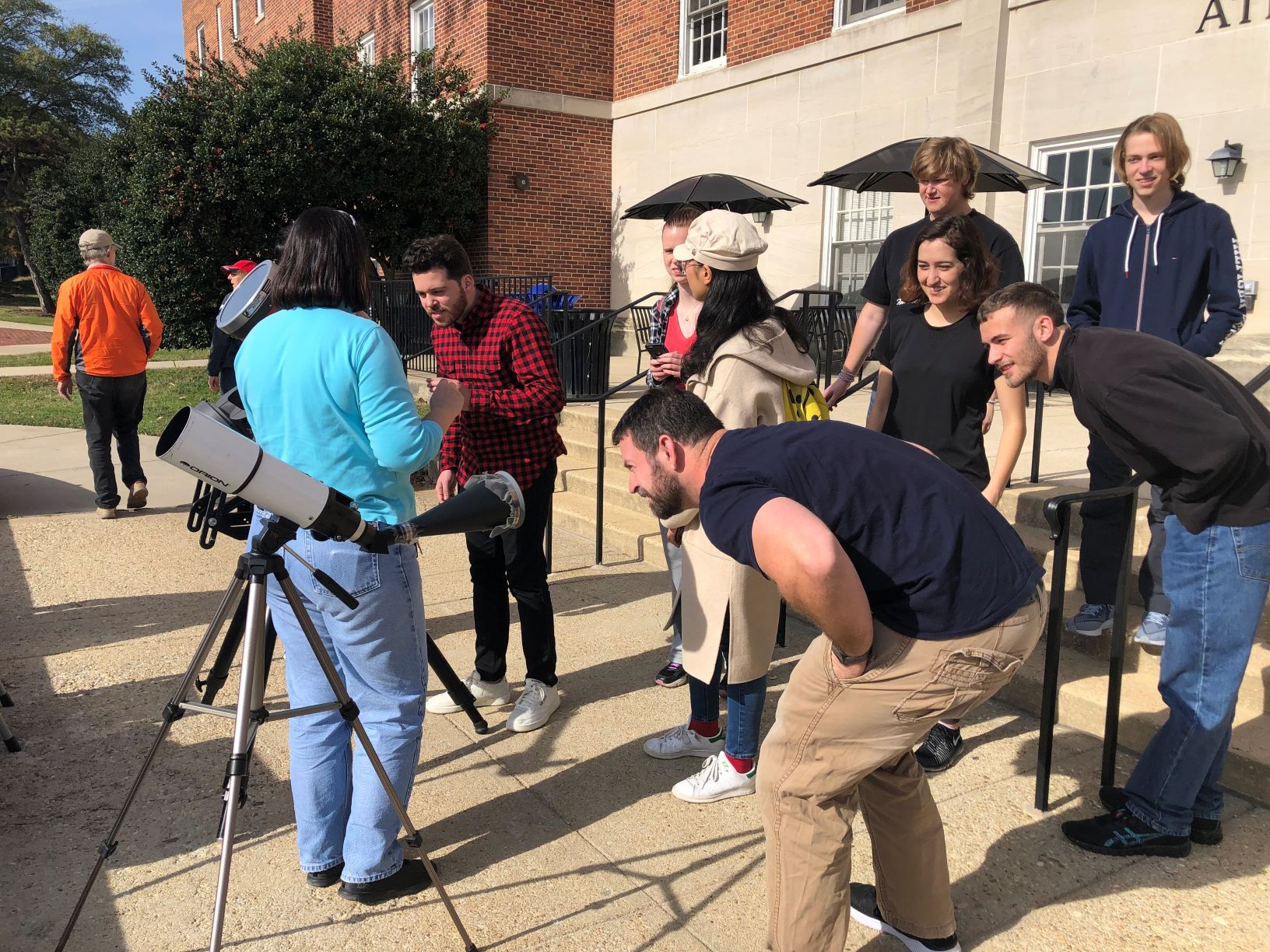 Students observed Mercury passing in front of the sun on Monday morning. (Julia Rosier/For The Diamondback)

The University of Maryland’s astronomy department placed telescopes outside the Atlantic Building on Monday and invited passersby to watch Mercury cross in front of the sun.

Elizabeth Warner, an astronomy faculty member and the director of this university’s observatory, stood outside the Atlantic Building from 7 a.m. until the very end, catching students as they walked by and asking them to take a look through the telescope.

“These happen roughly 13 times in a century,” Warner said.

As students peered through the telescopes, Warner explained what they were looking at. She said Mercury takes about 88 days to orbit around the sun, but that we don’t always see it when it crosses the sun’s path.

“Mercury’s orbit is tilted and inclined, so from our point of view we sometimes see Mercury passing below the sun and the sky or above the sun and the sky,” she said. “It’s only when Mercury’s crossing the orbital plane of the earth — and if we happen to be there — that we see the transit.”

Junior government and politics major Ecaterina Tau stopped by on her way to class. Tau said she did not know about the transit before looking through the telescopes.

“I thought it was really cool,” Tau said. “I never get to see stuff like this.”

Tau said when she looked through the telescope, she saw the orange-yellow disk with a black dot in the center. She was surprised at how small the planet looked compared to the sun, she added.

[Read more: UMD is part of a group advising a protested telescope in Hawaii]

Senior astronomy and physics major Ernesto Benitez said he knew about the transit prior to seeing it in the telescope.

“When you see it through the telescope it’s really cool. You can see Mercury very clearly,” Benitez said. “I figured I’d see it now before I have to wait so long to see it again.”

Amaury Bouyom, a doctoral student studying geology at the Paris Institute of Earth Physics, also knew about the transit prior to Monday. Bouyom added this wasn’t his first time viewing a Mercury transit.

“I understand it so I’m less surprised but it’s really cool to see that,” Bouyom said. “It’s quite nice to be able to see such a small thing on such a bright star.”