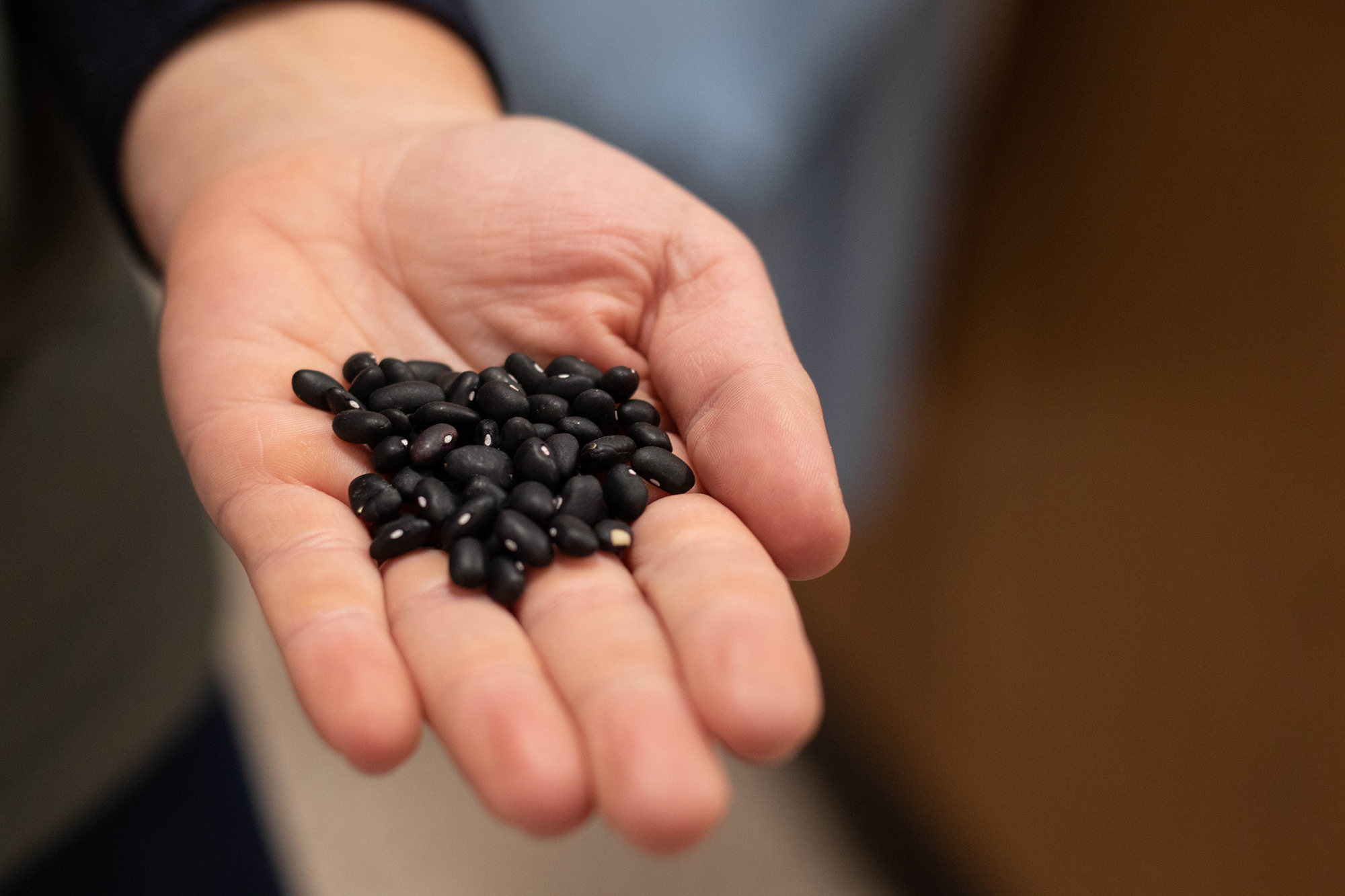 University of Maryland student Dana Rushovich holds beans that she grew as a result of her soil research. Rushivich donated 500 pounds of beans to Dining Services, leading to the first dining hall meals made with food grown in a student research project. (Julia Nikhinson/The Diamondback)

When Dana Rushovich began her master’s research project in the spring of 2018 to test plant yields from different soil qualities, she knew she would end up with quite a few black beans. But the nearly 500 pounds her research yielded was a bit more than she knew what to do with.

So, she reached out to the University of Maryland’s Dining Services department, leading to the first dining hall meals made with food grown in a student research project.

“Instead of letting the beans go to waste, I figured I could give it to them,” Rushovich said.

Dining Services staff was excited — and shocked — by the gift.

“Our senior executive chef — who cooks a lot of food for the whole department — even he said, ‘Wow, that’s a lot of beans,” said Allison Tjaden, Dining Services’s assistant director for new initiatives.

Three campus dining halls served 100 pounds of the legumes on Nov. 6 during the Field to Campus special dinner, and about 50 pounds were given away at the Farmers Market on Nov. 13 for a cooking demonstration on how to make bean chili, Tjaden said.

Dining Services will keep the nearly 300 pounds of remaining beans, serving it during the spring special and giving some to the campus pantry in the coming weeks.

This bean surplus could be thanks to sulfur, which Rushovich said she added to the soil to test if it would result in larger yields of high-protein foods such as beans and lentils.

Her adviser, Ray Weil, began his research on the relationship between sulfur and legumes decades ago in Africa.

The professor and researcher in the university’s environmental science and technology department observed that soil in the continent had low levels of sulfur, resulting in a lower yield of beans and lower protein quality in the seeds themselves.

“It’s a plant nutrient that nobody investigates or thinks about,” said Weil, who added he had been encouraging farmers in Africa for decades to consider using more sulfur in their soil in order to improve nutrition.

When Weil returned to the U.S., he found there was little research money available to study African foods such as lentils and peanuts, so he decided to focus his attention to soybeans instead, a popular legume used to make products like soymilk and tofu.

For years, Weil and his research team planted and harvested soybean seeds by hand in order to analyze the samples back at their labs. Then, an undergraduate student worker from El Salvador on Weil’s team told Weil about her grandmother back at home using the same hand-picking harvesting processes to grow and harvest black beans.

That inspired Weil to expand the research to include them. He also thought their research would have more impact if they added the dark legumes.

“We also wanted to have a global reach with the project, so we decided to plant the black beans since they’re more traditionally consumed around the world,” said Rushovich.

Rushovich decided to plant the black beans at the Central Maryland Research and Education Center in Beltsville in June and had them harvested at the end of October.

With the success of this collaboration, Tjaden welcomes the idea of allowing more student-led projects to partner up with Dining Services.

“It would be so much fun if there are foods that are grown in the context of research and safe to eat that we can put on our menus,” Tjaden said.