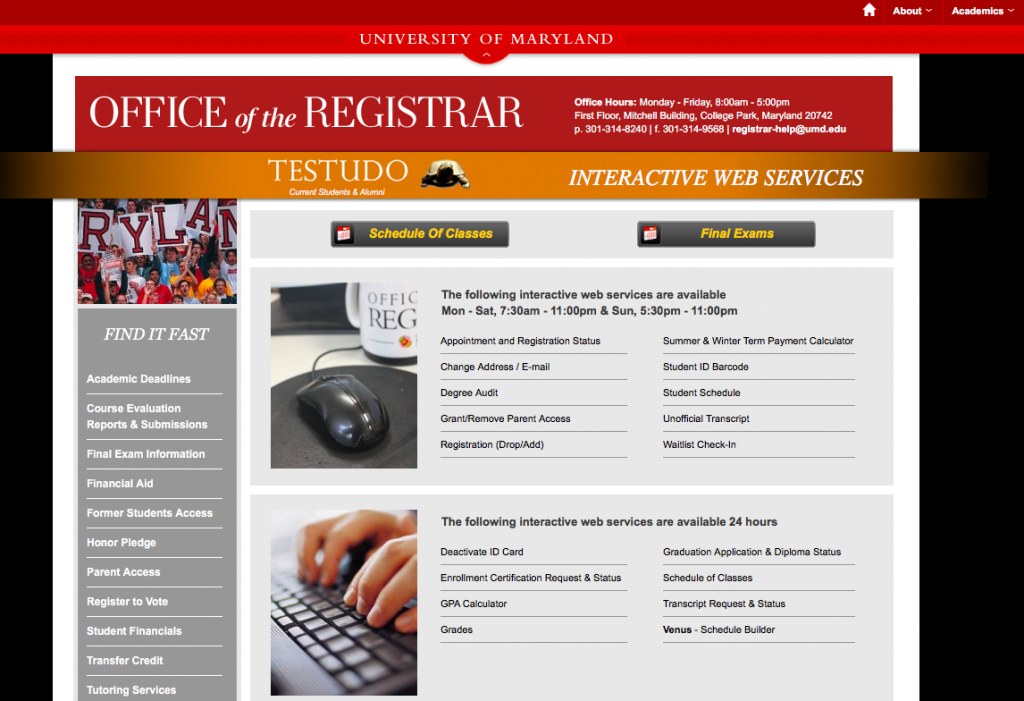 UMD officials are seeking a replacement for the university's registration and grades system, known as Testudo. They're choosing between two outside vendors — Workday and Oracle.

Jack Blanchard, chair of the University of Maryland committee that’s choosing a software to replace Testudo — formally known as the Student Information System — couldn’t say exactly when it was created. But one thing was for sure.

“We are using a system that is literally older than our students,” said Blanchard, the university’s associate provost for enterprise resource planning.

The new system for class registration, grades, transcripts, payroll and more will be available online 24/7, unlike its predecessor, but most of the current student body will never see it. It will take at least five years to make the switch, Blanchard said.

In the first two weeks of November, two California-based software vendors, Oracle and Workday, came to campus to showcase their enterprise systems. Both cloud-based systems would put an end to the “batch processing” that makes parts of testudo.umd.edu inaccessible at certain times of the day, Blanchard said.

“[The current system] has to process data and update the system on a regular basis,” Blanchard said. “[So it] can’t be available, because it needs to update all of the data within the system.”

Celia Cook, a sophomore English and psychology major, said this is her biggest frustration with Testudo.

Sarah Beyer, a senior animal science major who works at the farm on campus, said it is especially disruptive to student workers.

“If you work crazy hours and you are required to give your hours to your manager at a certain point, it is kind of unreasonable to expect us to be able to turn [the hours] in before [the system] closes for the night,” Beyer said.

The system’s time constraints also make it difficult to review your class schedule in the beginning of the semester when you don’t have it memorized yet, Beyer said.

The new system has a variety of advantages. It will be mobile friendly, and the campus won’t have to write the software anymore, instead relying on a vendor to provide the system and update it.

And Workday also has a virtual assistant, which uses conversational interface machine learning.

“As you ask Workday more questions we become smarter and smarter about the answers you get,” said Evan Baum, a representative from Workday. “So it’s simply by College Park adopting the software you get an experience that’s going to learn with you.”

Baum said during a Nov. 12 campus presentation that the system would combine the current Student Information System and the Human Resources System, which means that students would be able to register for classes and record hours worked in the same portal. They would also be able to make requests, like learning accommodations.

The current HR system doesn’t communicate with the student system, which is an issue for students who work on campus, Blanchard said. Before replacing those systems, the university would need to update the Human Resources system, which Blanchard said would take about two years.

The student system is much more technical in terms of what is required — transcripts, financial aid, course scheduling. The transition and implementation would then take three years, Blanchard said.

“[The university is] replacing everything that’s taken pretty much decades to build, going to a completely new way,” Blanchard said. “It’s not just changing the software, it’s changing business practices.”

[Read more: Here’s everything you need to know about UMD’s multi-factor authentication]

“It is a technology that’s just now maturing, and you’re seeing many other large universities starting to make this migration from older mainframe to this cloud-based system,” Blanchard said.

Similar to Workday, Oracle uses a chatbox to assist the user. It will also have other Adaptive Intelligent Apps and will use the Internet of Things, Monica Edwards, an Oracle representative, said during a Nov. 5 campus presentation.

Edwards said Oracle’s Higher Education cloud is a single system, but the platform will have different functions if you are a student or faculty member.

Blanchard said both vendors meet the requirements of what the university is looking for in the new system. The differences are mainly in their designs and how the softwares were built.

For people who were unable to attend the meetings with the vendors, Oracle and Workday recorded the presentations. Blanchard sent an email to the campus community Nov. 20 that contained the links.

Community members were also invited to complete an online survey for each vendor. The university will use the survey results to help make their decision. After people complete the survey, the technical evaluation committee will review both vendors and Blanchard expects contract negotiations with the selected company to occur during the spring semester.

Beyer said she fears the system may become obsolete by the time changes are fully implemented, although a new system is a must.

“By the time they come up with [the new system,] there’s going to be something even more new,” Beyer said.

“My fearless idea for UMD is: Be better,” Cook said.