As Maryland football keeps losing, it can’t quite figure out what’s wrong 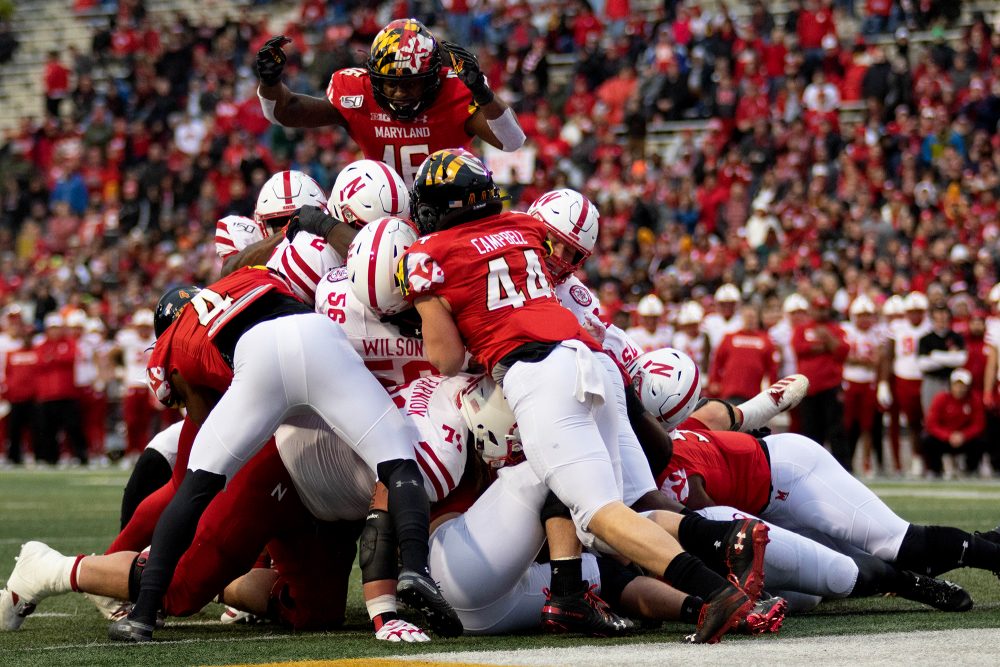 Nebraska quarterback Adrian Martinez breaks the plane of the end zone on a sneak during Maryland football's 54-7 loss at Maryland Stadium on Nov. 23, 2019. (Julia Nikhinson/The Diamondback)

When Mike Locksley arrived at the lectern inside Tyser Tower at Maryland Stadium for his Tuesday press conference, the coach was effusive in what seemed to be genuine belief his Maryland football program would soon reap on-field rewards for its incremental improvements off it.

But when Locksley arrived at the lectern inside the Gossett Team House after Saturday’s 54-7 defeat against Nebraska, a similar soundtrack began to play following another lopsided loss.

“I am disappointed in our performance today, especially for those 16 seniors that we honored before the game,” Locksley began. “I thought from top to bottom we need to be better; I expected us to be. I have high expectations for this team and I’m not going to lower my expectations.”

Whatever Locksley’s expectations may be, the reality has been this: The Terps have suffered five 30-plus point losses this season, the most in a single campaign in the history of the program. Maryland punted as many times as it converted on third down. Its four quarterbacks — each banged up in their own way — managed to throw for 57 yards. And Javon Leake, who has emerged as the Terps’ best running back this season, put the ball on the turf three times.

Crippling early mistakes pushed the game far out of reach. At its core, Saturday’s home finale was a lot like Maryland’s other blowout losses — an offense incapable of staying on the field, a defense that struggles to get off it and self-inflicted miscues that exacerbate the mess. But against a Cornhuskers team that entered on a similar losing streak, Locksley admitted it was the low point of the season.

“Definitely. For me, it is,” he said. “For us to not play to our ability is disappointing. We had a couple of weeks to prepare. The thing that continues to sit in my craw is the fact that it’s us hurting us.”

And for the seniors who ran out onto Maryland Stadium one last time in front of a Nebraska-heavy crowd, Saturday was a bitter pill to swallow. It’s a senior class that dealt with several coaching changes and the death of offensive lineman Jordan McNair in June 2018. They banded together and still managed to finish 5-7 on the field during a season in which the on-field product was an afterthought.

In Locksley’s first year at the helm, though, the best the Terps can finish is 4-8, depending on the result of next week’s finale in East Lansing against a Michigan State team playing with its bowl eligibility on the line.

The players say they see the small improvements inside the program that one day might culminate in wins. But they’re left at a loss over outcomes such as Saturday’s, when the game plan during the week seems to crumble and the even field quickly tilts in the opponent’s favor.

“We’re still missing the overcoming adversity part,” offensive lineman Ellis McKennie said. “I don’t get it. The team that’s overcome adversity in the real life can’t do it on the football field, for some reason. I don’t understand. It’s frustrating. We get down a little bit, heads start to drop and it just spirals out of control before you know it. I wish we were better, and I thought we could be better. But it’s just difficult.”

At one point, when Maryland’s season was still in its infancy and Locksley’s squad had flexed its muscles by outscoring Howard and then-No. 21 Syracuse 142-20, the Terps snuck into the top-25 rankings. They’ve gone on to lose eight of their next nine games — a 48-7 win over Rutgers serving as the lone salve on a season-defining skid.

In the buildup to the latest calamitous defeat, the team-sponsored message from seniors and underclassmen alike focused on the promising future of the program. Maybe there will be one; it’s only Locksley’s first year. But if this season is the figurative foundation for bigger things yet to come, it doesn’t seem like it can hold much.

“If you guys have been to our practices, they look crisp, clean, guys are playing good ball,” linebacker Chance Campbell said. “It’s just getting that to translate to Saturday.”

Maryland hasn’t been able to translate it with much frequency this season, and this week’s outing continued that tepid form. Locksley has one more chance next week to secure the Terps’ second conference win this year, something he’s never done as a head coach.

At the helm of New Mexico, Locksley managed one conference win in both 2009 and 2010 before he was fired in 2011. As Maryland’s interim head coach in 2015, his squad knocked off Rutgers to close the season, salvaging one win from the Big Ten slate. The Scarlet Knights are the lone bright spot in 2019, too, bringing Locksley’s career record to 6-39.

But these issues trickle down through the program, from the head coach to each individual player trying to complete their individual assignments each Saturday. And on this Saturday, in a 54-7 blowout loss to Nebraska, the blame goes beyond Locksley. As does the pain.