What the Terps did in Week 11 of NFL play 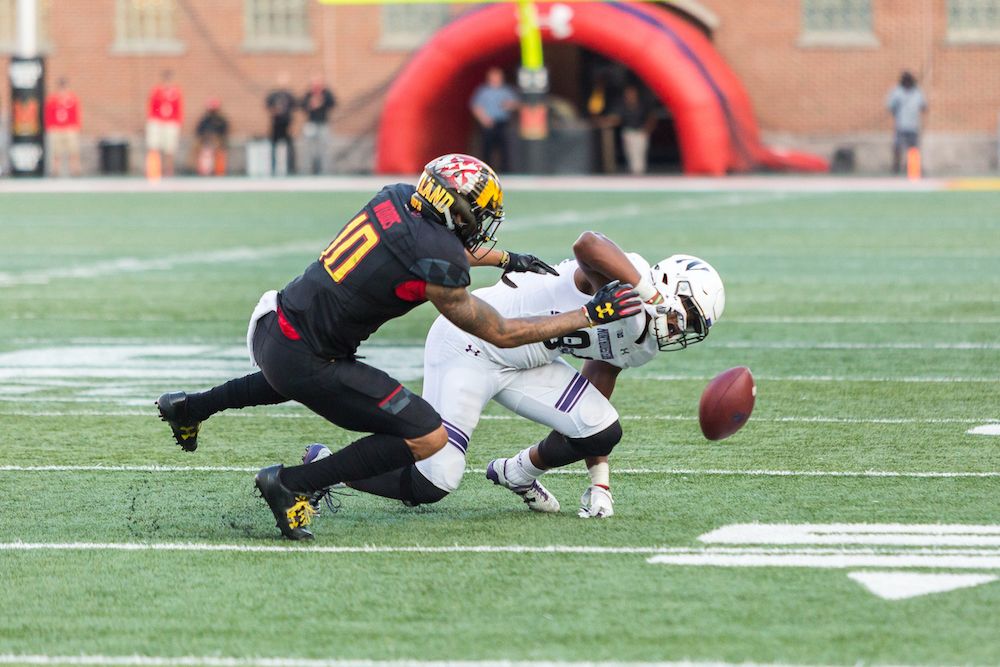 Defensive back Josh Woods breaks up a catch in the open field during Maryland’s 37-21 loss against Northwestern University on Oct. 14, 2017. (Marquise McKine/The Diamondback)

Week 11 was another impressive week for Terps in the NFL, especially the pair of wide receivers.

After back-to-back 100-yard performances, DJ Moore caught eight passes for 95 yards in the Carolina Panthers’ 29-3 loss against the Atlanta Falcons. Despite his recent success, Moore hasn’t found the end zone since week 3 against the Arizona Cardinals. Moore will look to continue his good play against another divisional foe, as the Panthers take on the New Orleans Saints in week 12.

Stefon Diggs caught five passes for 121 yards and a touchdown in the Minnesota Vikings’ 27-23 comeback win against the Denver Broncos. Diggs now has 880 yards on the season and is averaging 19.1 yards per catch, which is good for third in the league. It is looking like Diggs could be on his way to his first-ever Pro Bowl.

Yannick Ngakoue recorded four tackles and a forced fumble in the Jacksonville Jaguars’ 33-13 loss to the Indianapolis Colts.

Ty Johnson had two carries for five yards and caught one pass in the Detroit Lions’ 35-27 loss to the Dallas Cowboys on Sunday. Despite looking like he’d take over as the starter after Kerryon Johnson’s injury, Johnson has been relegated to back up again, with the Lions opting to start Bo Scarbrough.

J.C. Jackson had three tackles in the New England Patriots’ 17-10 win over the Philadelphia Eagles. He had an interception, but it was called back after a penalty on the Patriots.

Woods recorded one tackle in the Chicago Bears’ 17-7 loss to the Los Angeles Rams on Sunday night. It was his first tackle of the season.

Jermaine Carter Jr. recorded one tackle in the Panthers’ loss on Sunday.

Edmunds had three carries for 11 yards and caught three passes for 27 yards in the Pittsburgh Steelers’ 21-7 loss to the Cleveland Browns.

Byron Cowart did not record any statistics in the Patriots’ win.

Darnell Savage and the Green Bay Packers had a bye in week 11 after their week 10 win over the Carolina Panthers.

Quinton Jefferson and the Seattle Seahawks had a bye in week 11 after their week 10 overtime win against the San Francisco 49ers.

Vernon Davis has not played since sustaining a concussion in week 4 against the New York Giants.