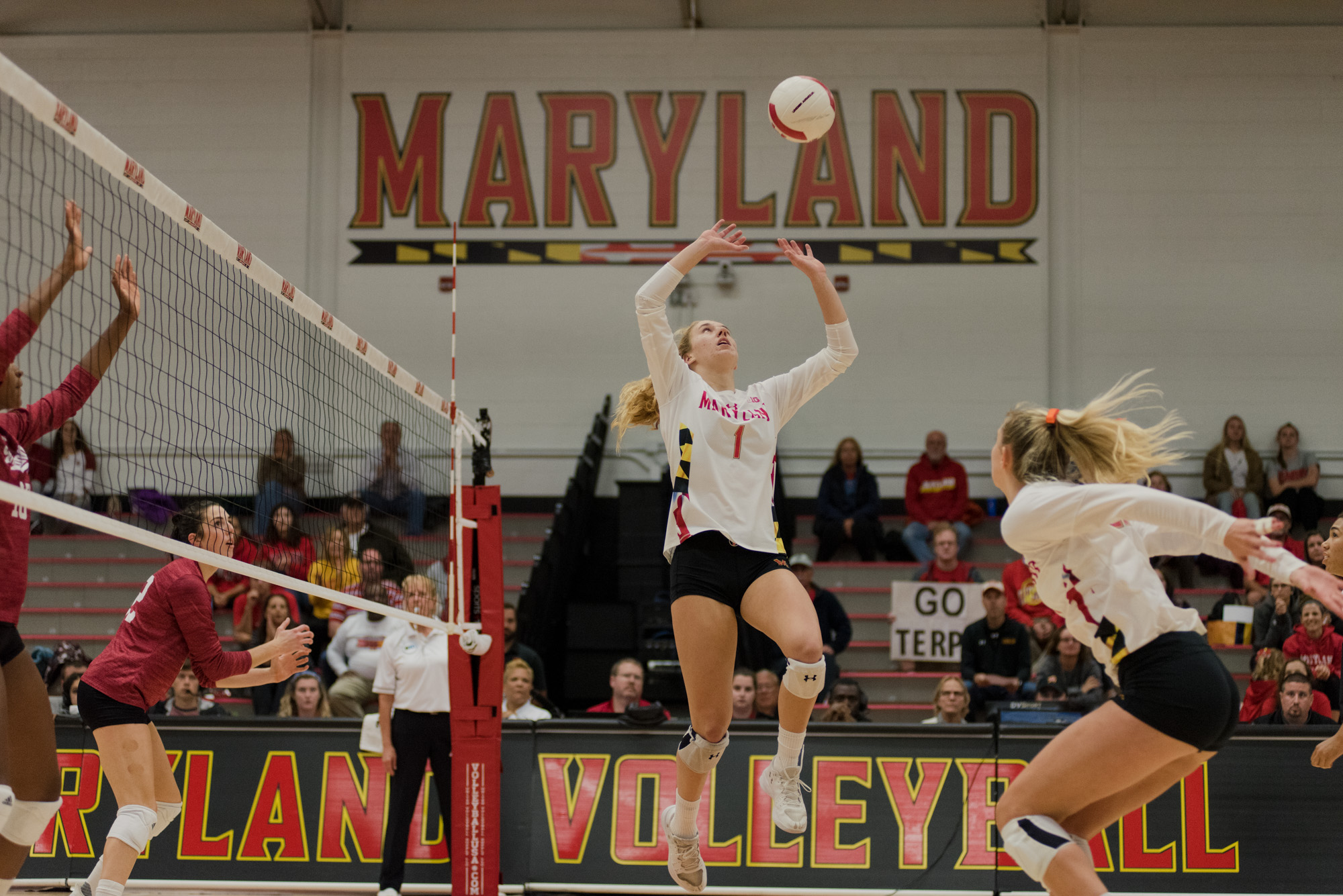 As setter Nicole Alford participated in last Friday morning’s serve and pass session prior to Maryland volleyball’s match against Indiana, she learned she would be a “full-go” for the match. Alford had missed the team’s previous three contests through injury, and she was eager to rejoin her teammates on the court.

But Alford might not have expected her return to prompt coach Adam Hughes to make a change in the team’s rotation. Ahead of matches at Indiana and Purdue, Hughes switched back to a 5-1 formation instead of the 6-2 the team has run all year.

The Terps experienced mixed results with the formation this weekend, edging out a 3-2 victory against the Hoosiers on Friday night while falling to the Boilermakers in straight sets. With Alford back fully healthy, the Maryland coaching staff is pleased with the benefits the formation has provided since its implementation.

“The 5-1 has allowed us some extra defenders in the back row,” Hughes said. “We also have more subs coming in and out, so we can kind of mix and match a little bit. That’s definitely one of our strengths right now.”

[Read more: Maryland volleyball’s serve and pass woes doomed it in a straight-set loss against Purdue]

A 5-1 differs from a 6-2 in that there is just one player setting the ball. The Terps ran a 5-1 for the entirety of the 2018 season, with Alford as their anchor. She totaled more than 1,000 assists for the team last season, while no other player possessed more than 102.

With Alford’s health in question for much of this season, Hughes never shifted full setting responsibility to just one player. Instead, the setting duties were distributed between Samantha Snyder, Chloe Prejean and Taylor Smith.

Maryland practiced in the 5-1 formation for much of the offseason as well. This week, Hughes’ squad has reverted back to a lot of its training from the preseason.

“Being in a 5-1 is new for some of this team,” Hughes said. “We kind of missed some of those things we worked on in the spring and in the offseason, but now we’re kind of back in that mode.”

Outside hitter Rebekah Rath, a newcomer with the Terps this year, hadn’t participated in a match using a 5-1 rotation before Friday. Rath didn’t see the shift as a big adjustment for her, however, and she’s prepared for whichever game plan the coaches roll out.

“We’ve been practicing both formations,” Rath said. “As a hitter, I don’t really have a preference.”

In Friday’s five-set thriller in Bloomington, Indiana, Alford came up one assist shy of her career-high 51. The 6-foot-1 transfer from Georgia Tech had 50 of the team’s 57 assists, a similar ratio to those seen in 2018.

For a healthy Alford and her teammates, the transition back to the old formation was largely seamless. Maryland feels healthy enough to run either a 5-1 or 6-2 rotation, and it’ll match up with opponents on a match-by-match basis, a team spokesperson said.

Alford’s full return has allowed for the increased flexibility in rotations, though, and the team aims to make the most of her presence.

“It felt pretty natural,” Alford said. “We flowed back into the 5-1 really well, and I’m just grateful to be back and healthy.”