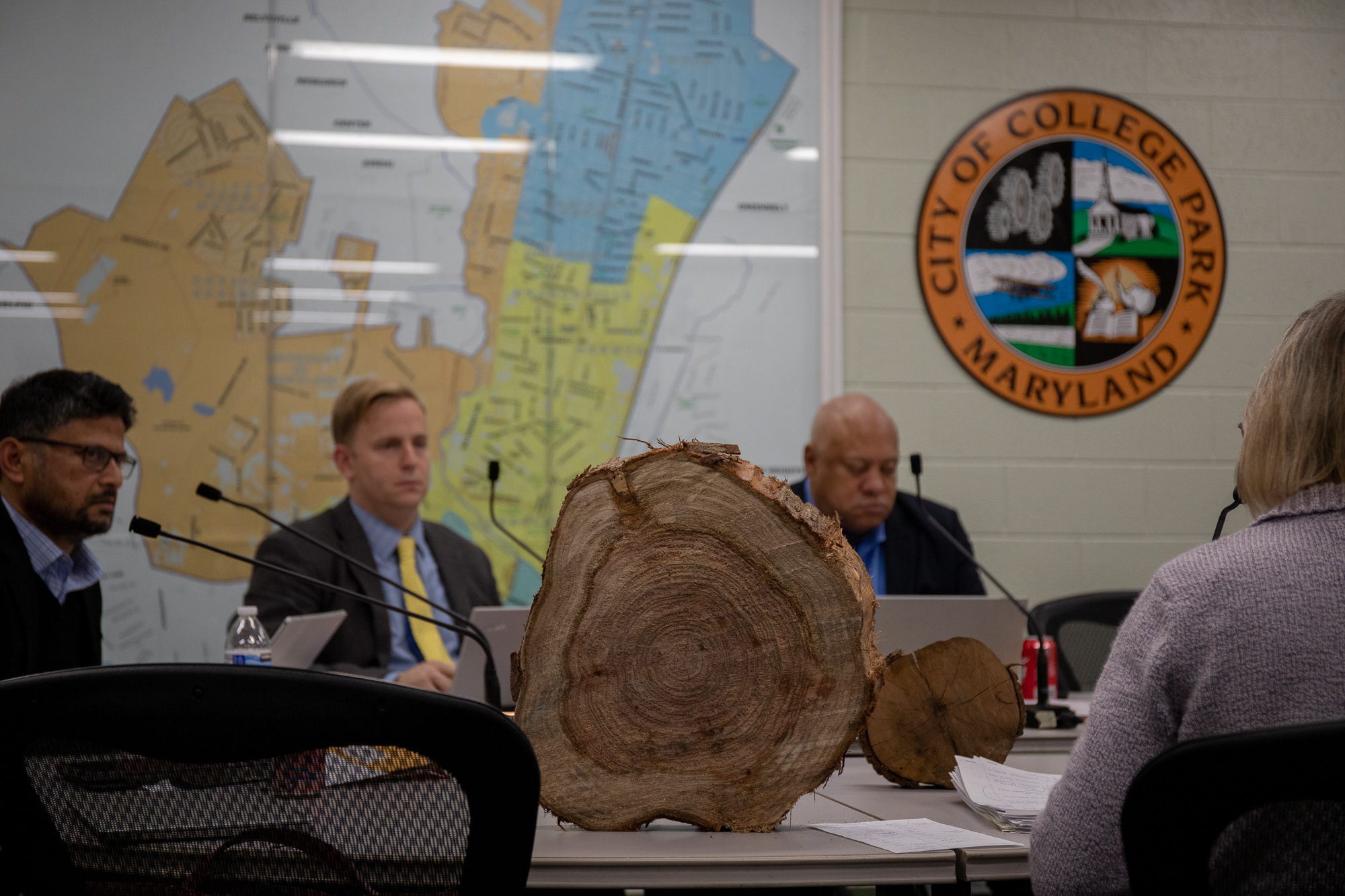 The College Park City Council listens to Review of Tree and Landscape Board recommendations for a tree ordinance at the meeting on Nov. 19, 2019. (Julia Nikhinson/The Diamondback)

On Tuesday, College Park’s Tree and Landscape Board presented recommendations to the city council for a potential ordinance that would require residents to obtain permits to fell trees on their property — but council members flagged a number of concerns.

The recommendations detailed which trees the ordinance would cover, how permits would be issued and what penalties there would be for those who failed to obtain permits or violated a permit’s terms.

As the board recommended, the ordinance would require citizens or commercial bodies that cut down trees to either replace them with new ones or pay a fee to the city’s Tree Canopy Enhancement Program fund. The number of trees to be replanted and the fee amount would both depend on the size of the tree felled.

While several council members said they understood the need to protect College Park’s tree canopy — which a citywide study found to be declining — they said their constituents were worried that the possible ordinance would encroach on their property rights and lead to escalating costs.

“People aren’t questioning the value of a strong tree canopy,” said Mayor Patrick Wojahn. “The question that people have is — Is this the right solution to protect and enhance our tree canopy?”

The board’s recommendations follow an April report that found College Park tree canopy — the layer of tree branches, stems and leaves that cover the ground from a bird’s eye view — has declined from 44 percent to 38 percent in roughly the last nine years. The study indicated that resident engagement would be key in boosting the city’s tree cover.

Board members met for months to compile a series of suggestions for the potential ordinance. And over more than an hour of discussion, some members adamantly stood by their recommendations in the face of councilmember’s critiques.

At one point in the meeting, John Lea-Cox interrupted District 1 Councilman Fazlul Kabir as he discussed the obligations that would be associated with felling trees.

“The point is, we’re declining in canopy, we need to replace trees,” Lea-Cox said. “It’s as simple as that.”


The ordinance would require residents and commercial developers to get a permit to cut down or prune more than 20 percent of two kinds of trees: those on government land and those on private land with trunks greater than 36 inches in circumference.

The permit requirement would only be waived if a tree presented an immediate threat to life or property unless it was cut down.

Anyone interested in pruning or cutting down a tree would be required to apply for a permit, at which point public works staff would assess the condition of the tree in question. If they determine it to be dead, diseased, hazardous or a member of an invasive species, staff would grant the removal permit. Additional factors such as overall tree health could also factor into permit approval, according to meeting documents.

If granted a permit, people who desired to remove a tree would be required to either plant new trees to replace those lost or pay a fee to the city. Between one and five trees would need planting to replace a single lost one, and fees would depend on the felled tree trunk’s circumference, costing between $150 and $1,000.

District 1 Councilwoman Kate Kennedy signaled her support of the ordinance as recommended but wondered how she and her colleagues could garner resident support for its passage.

“If we’re going to do this, it’s going to hit resistance,” she said. “What carrots can we offer instead of sticks? Because what we’ve been talking about here is a lot of sticks and not a lot of carrot.”