With a new starting lineup, Maryland women’s basketball broke out of its offensive mire 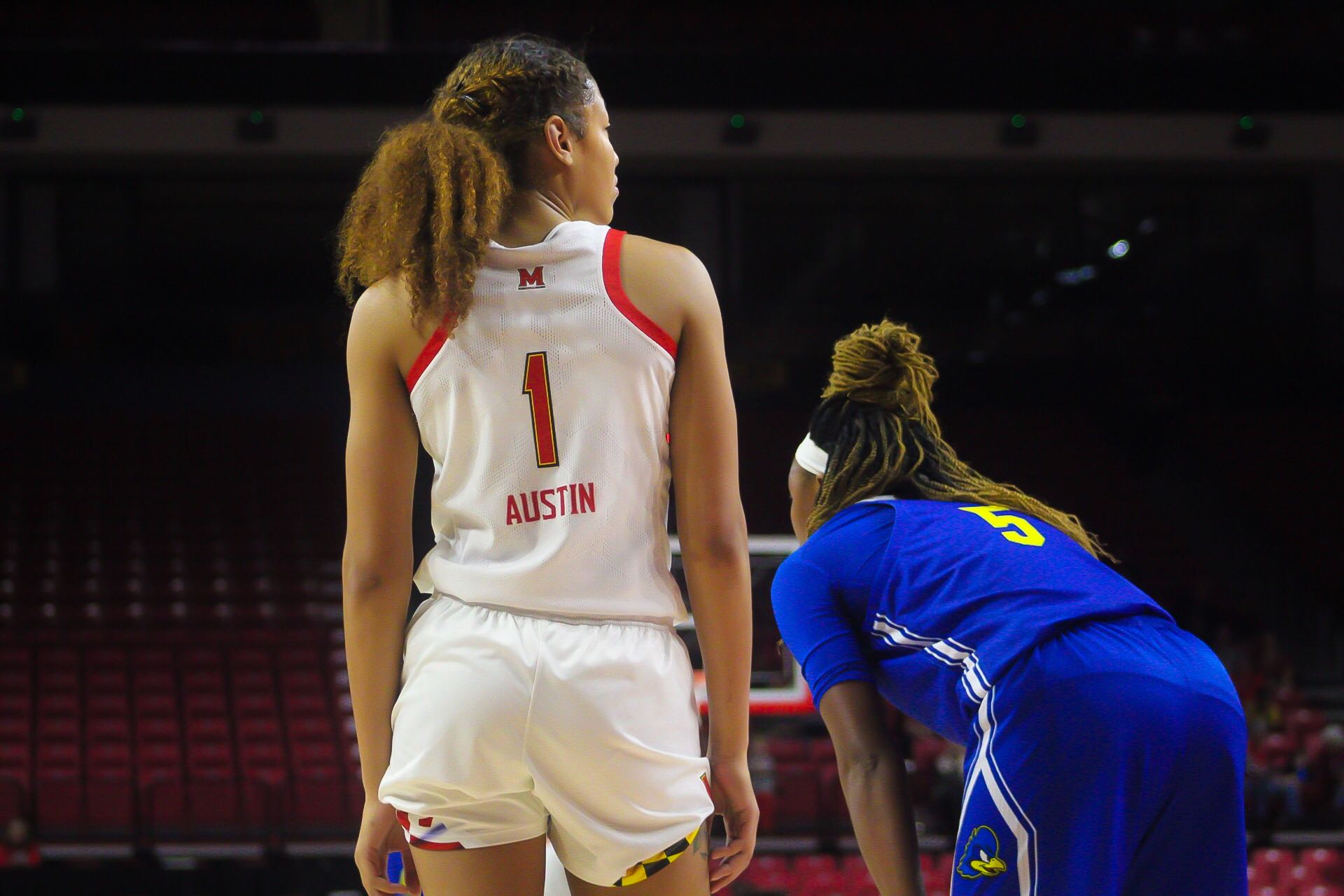 After needing a 21-point fourth-quarter comeback to edge James Madison — interrupting what had been seven consecutive quarters of unsightly shooting performances — coach Brenda Frese sought a solution to her squad’s recently stagnant offense.

So, she altered her starting lineup for the first time this season, replacing forward Stephanie Jones and guard Diamond Miller with forward Shakira Austin and guard Blair Watson.

When Frese deployed the new starting five against Delaware on Sunday, the experiment paid off. The Terps cruised to a 20-4 lead midway through the opening quarter en route to a 99-55 home victory, with Watson and Austin both playing key roles in the offensive onslaught.

“We needed some experience on the perimeter when you talk about from Blair’s end. I think defensively that’s an area that I felt like we needed to kind of tighten up,” Frese said. “If we want to go where we need to go, we need to use our 6-foot-5 presence inside. Having that size, we’ve got to be able to get Shakira to where she needs to be.”

Austin’s impact was immediately noticeable, as she used her length to alter numerous Blue Hen attempts and make their guards think twice about driving to the rim. With Jones on the floor, there’s more offensive upside. But Austin is a ferocious shot-blocker and an active rebounder, valuable assets despite still progressing on the offensive end.

The team hopes the sophomore’s consistency comes with more experience, but she’s already shown an ability to disrupt the opposition and anchor the defense when she’s engaged.

A career-high four assists also showcased an improved willingness to pass out of the post once defenders collapse on her. Austin has a propensity to force her way into the lane and as a result has a team-leading 11 turnovers so far this season, but her outing against Delaware looked to be a positive step in her development as a distributor.

“[Austin’s] passing ability is incredible. She sees over the defense so she just attracts so much attention down there,” guard Taylor Mikesell said. “She was finding Blair, Ashley [Owusu], Kaila [Charles], everybody, so her passing ability just makes us such a better team.”

[Read more: Maryland women’s basketball drops to No. 9 in AP poll despite 2-0 week]

Mikesell, who led the team with 23 points and five 3-pointers, also benefited from Watson’s presence at the start of the game. With Miller as the wing opposite Mikesell, Maryland struggled to get clean looks from behind the arc. The sophomore sniper drew heavy attention from defenses hoping to neutralize her strength.

But with the inclusion of Watson, who’s made three triples in each of the last two games, the Blue Hens had to account for two strong long-distance shooters on the floor. Mikesell took advantage of her open looks, knocking down two triples in the first few minutes and getting her out of a two-game shooting slump.

When the defense began to key in on Mikesell, Watson found herself open for multiple 3-pointers from the corners and hit two before the first-quarter buzzer sounded, one of which came from a Mikesell swing pass.

“I loved how we shared the basketball; 27 assists. I thought we had a much better purpose on offense,” Frese said. “I think obviously the more time we get to spend together … as a team we’re able to continue to improve.”

After missing both her shots in a zero-point effort at James Madison, Miller bounced back with nine off the bench against Delaware. She made her first 3-pointer of the season in the third period. She’s yet to find an offensive rhythm, shooting just 31 percent in her first four collegiate games, but her ability to turn a defensive rebound into a fastbreak opportunity is a useful tool for Frese to use as a reserve.

And Jones’ benching was her first non-start since her freshman year, but the senior seemed unaffected, continued consistent play and still reached her season average of just over 20 minutes per game. She’s the most tempered of Maryland’s bigs, although her lack of rebounding could take her off the court against bigger teams such as South Carolina.

Going with Austin and Watson in the starting lineup worked against Delaware. As the season progresses, Frese expects that execution to carry over into consistent results.

“I think sometimes we’re making plays harder than they need to be. When you drive and someone helps, it’s a [kick-out], it’s an easy read and reads that we make all the time. We make them in practice but it hasn’t transferred 100 percent to games,” Frese said. “I thought [Sunday] we moved that needle better in the right direction, but that needs to continue to improve. … All this just takes time within our team.”