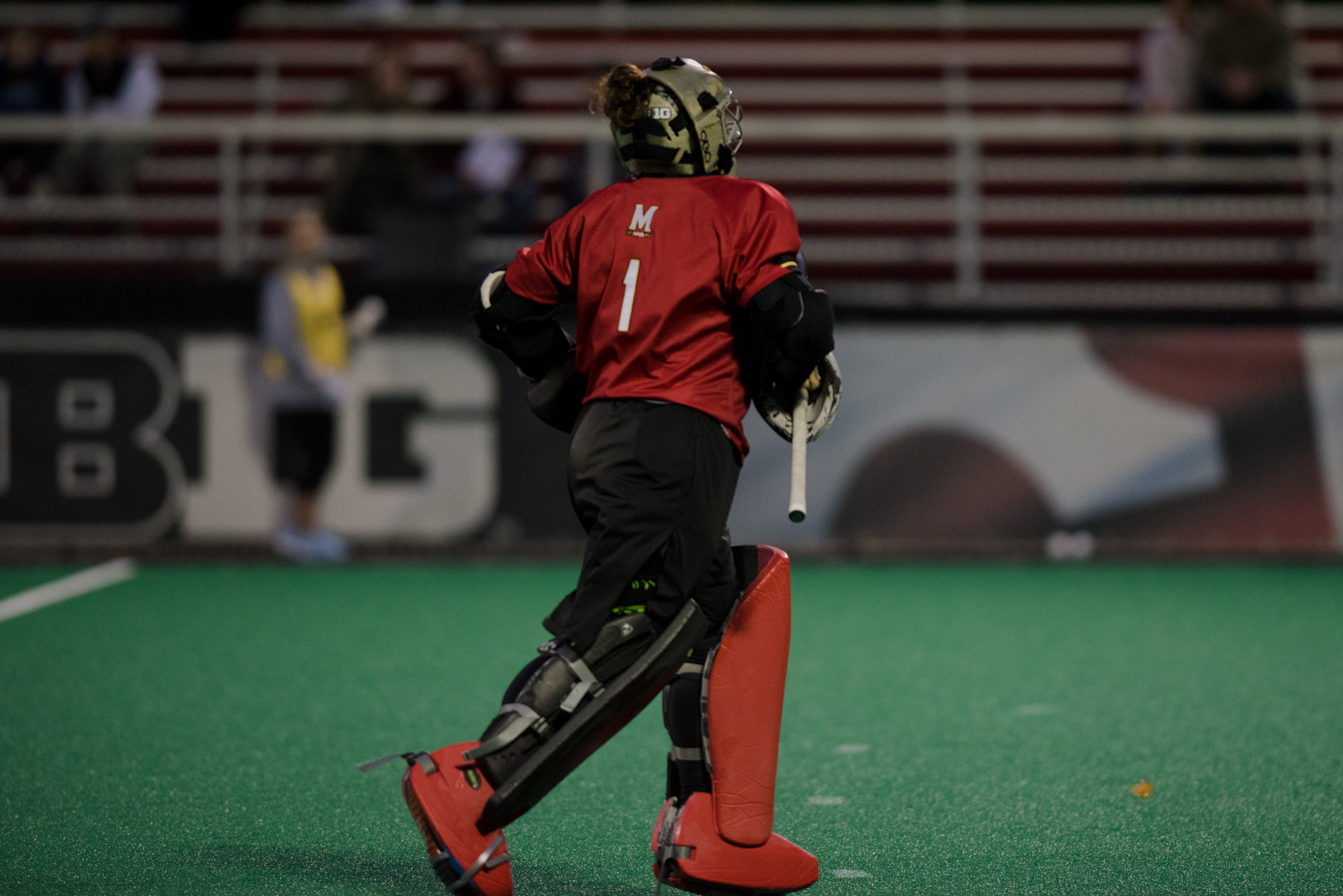 Two minutes into the fourth quarter of Maryland field hockey’s matchup with No. 3-seed Virginia, goalkeeper Noelle Frost dropped to the ground to parry away midfielder Rachel Robinson’s penalty corner effort, preventing a breakthrough in the scoreless affair.

But the ball fell to defender Anzel Viljoen, standing outside the goalmouth with the cage gaping. Defender Bodil Keus rushed to the goal line, hoping to make a last-ditch clearance. But as the ball dribbled to the cage, Viljoen’s effort seemed destined to dash Maryland’s hopes of a third consecutive final four appearance.

Frost swooped in, though, stretching across the goal frame and knocking the ball out of play with her stick.

Those were two of her eleven saves on the night — a new career-high. And while the Terps were unable to leave Charlottesville with a victory, ending their season, Sunday’s performance in the NCAA tournament was the culmination of a long and unorthodox journey for the redshirt senior.

“She’s great,” Keus said, “Noelle Frost definitely picked it up so well. … I trust her every single [time] she’s in the circle.”

Frost’s journey to becoming the Terps’ No. 1 in net began on a grassy field in rural Glenwood, striking balls with a stick that her older cousins — former players at Frostburg — gifted her.

Despite her predisposition for the sport, Frost remained heavily involved in other activities, especially after her transition to public education from home schooling.

Softball and field hockey dominated her athletic life, along with dancing. And, in her free time, Frost joined 4-H club, a service organization for children.

“I was the president of the club at one point,” Frost said earlier this season, chuckling, “President of a bunch of elementary schoolers.”

But field hockey reigned supreme for Frost, who joined Gambrills-based SPark Field Hockey Club and quickly established herself as one of the top goalkeeper prospects in the nation.

Shortly thereafter, Frost committed to Maryland, setting the course for what would be a whirlwind first four years in College Park.

She had to wait her turn, though. When Frost first arrived in 2016, she was greeted with a redshirt, with former Maryland goalkeepers Sarah Holliday and Sarah Bates embroiled in a tightly-contested battle for the starting spot.

She continued to bide her time as Holliday became the unquestioned starter, and saw only 11 appearances combined in her sophomore and junior seasons.

But the Glenelg alum was always ready, and eventually, she got her chance after Holliday graduated last year.

“Noey’s new, but she’s not new,” coach Missy Meharg said earlier this season. “[She’s] been looking at this opportunity, and I’m not surprised.”

Frost impressed over the course of the season, finishing the season with the third-best save percentage and goals-against average in the country. She added five shutouts and was named the NFHCA Division I Defensive Player of the Week on two occasions.

And Sunday, Frost bookended her season with yet another impressive display, putting the Terps in position to claim a momentous victory against a talented Virginia side that outshot Meharg’s squad, 17-6.

While an overtime winner ultimately cut Maryland’s season short, Frost’s development over the course of her career provides the Terps with a foundational piece to build upon. And with the redshirt senior returning to College Park next season, Meharg will be looking for a similar level of performance from her top netminder.

“She’s a pleasure to coach,” Meharg said. “She did her time as a redshirt. She’s now got the groove, and she knows what it takes.”