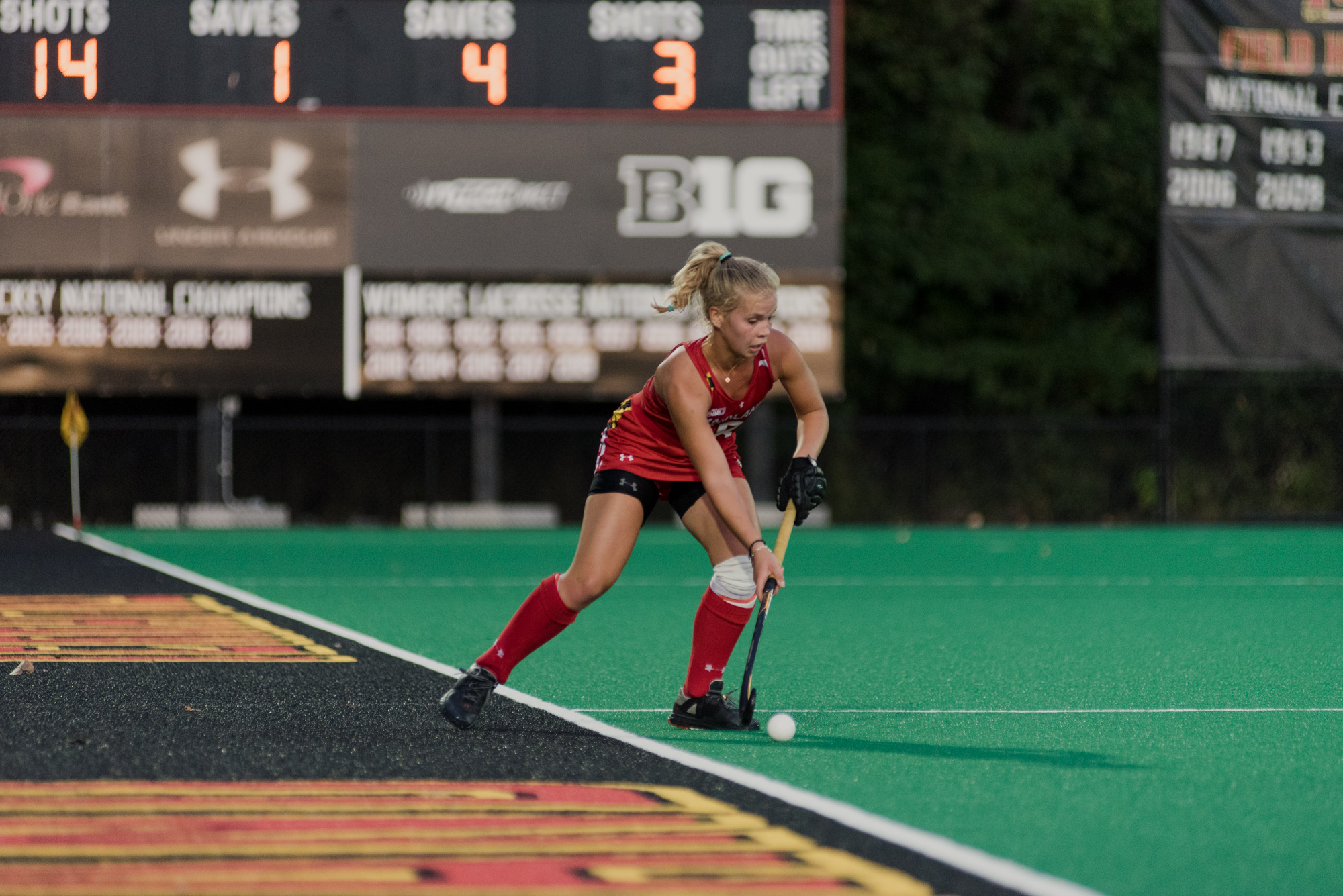 It was a tense atmosphere on Maryland field hockey’s sideline as defender Hannah Bond — an omnipresence in a Terps defensive unit that conceded the second-fewest goals in the NCAA — ambled toward the sideline, her face concealed by a bloody towel.

Minutes earlier, the junior stepped in front of St. Joseph’s forward Jordan Olenginski’s shot, striking her face and sending trainer Sandy Worth onto the pitch to attend to the Oxted, England, native.

And as Bond walked toward a gurney resting on the side of the pitch, a measure of uncertainty appeared in a tight contest after losing a defensive stalwart.

But coach Missy Meharg’s squad remained composed after Bond’s injury, setting off a dominant second-half display that pushed the Terps to a convincing 4-0 victory over No. 13 St. Joseph’s to send the Terps to the second round of the NCAA tournament.

“We could’ve easily let the situation become, ‘Oh no, what’s going to happen, she’s one of our key defenders,’” forward Mayv Clune said. “But instead, we all just looked at each other and knew … we’re going to come out with a fiery spark and do it for her.”

Neither side was afforded the space to flex their attacking strength in the opening frame, as both defenses kept the opposition attack on the outskirts of the shooting circle, reducing the quality of chances throughout the period.

When defender Emily Sayre slipped in front of defender Bodil Keus midway through the first quarter, though, her rifled shot toward Noelle Frost’s cage interrupted the dour offensive display. The Maryland goalkeeper got down quickly, deflecting the attempt away.

Frost’s save seemed to bring life to Maryland’s attack, as Meharg’s squad zipped the ball around the Hawks shooting circle for the remainder of the quarter. And Clune capitalized on the Terps’ increased possession, drifting into the shooting area before whistling a shot just wide of the frame.

“She’s been playing really well,” Meharg said of Clune, who replaced leading goalscorer Madison Maguire in the lineup. “She went through pretty tough surgery and rehab and just needed to get her feet wet and get back into a groove. She’s on her mark right now.”

Buoyed by heightened confidence, both sides began to flourish in the attacking third in the second frame. The Hawks appeared to have found the opener early in the second, as midfielder Pepa Serrano drove through the center of Maryland’s defense to get herself one-on-one with Frost.

But Frost flashed in front of Serrano, knocking the ball out of the Hawks midfielder’s control to preserve the shutout.

“Noelle kept us in it,” Meharg said.

Two minutes later, Keus arrowed the ball toward the bottom-left corner of the cage, giving goalkeeper Victoria Kammerinke no chance. But just as the ball looked set to furl into the cage, it struck the post, sending the battle to halftime deadlocked at zero.

With both sides looking far more imposing in the final third as the first half went on, it looked as if a goal was on the horizon.

“For us it’s just [about] taking a deep breath,” Clune said. “When we tend to play very fast hockey, the game can get away from us. … [When] we regain composure and figure out how to pass around people … it makes scoring opportunities a lot easier.”

And one minute into the third quarter, the Terps finally found their breakthrough.

Clune picked the ball up in the shooting circle, drove to the boundary line, and flicked a pass across Kammerinke’s goalmouth. Midfielder Brooke DeBerdine slid in front of a St. Joseph’s defender before getting the vital touch to send the ball across the goal line and send her teammates into a frenzy.

It was DeBerdine’s first goal of the season.

“Brooke’s taken a lot of shots [this season],” Meharg said. “It couldn’t have been a better time [to score].”

The Hawks responded accordingly, maintaining pressure around Frost’s cage and earning a penalty corner shortly after DeBerdine’s goal. Bond threw herself in front of Olenginski’s shot on the subsequent penalty corner, leading to a lengthy delay as Bond received treatment.

But once the Terps took the pitch again, they looked invigorated to put on for their fallen teammate.

“You could tell they were very, very energized to use the energy of the injury,” Meharg said. “I thought we played super well.”

Keus fired a long-range shot past Kammerinke to double Maryland’s lead as the third quarter came to a close.

And in the fourth quarter, Keus added to her goal tally, sending a shot into the top right corner, while Clune corralled a slick DeBerdine feed and rattled the cage with a low, driven effort, pushing Maryland past the Hawks and into a second-round rematch with hosts Virginia on Sunday.

“It’s going to be a battle,” Clune said. “We are going to have to put in whatever we have.”