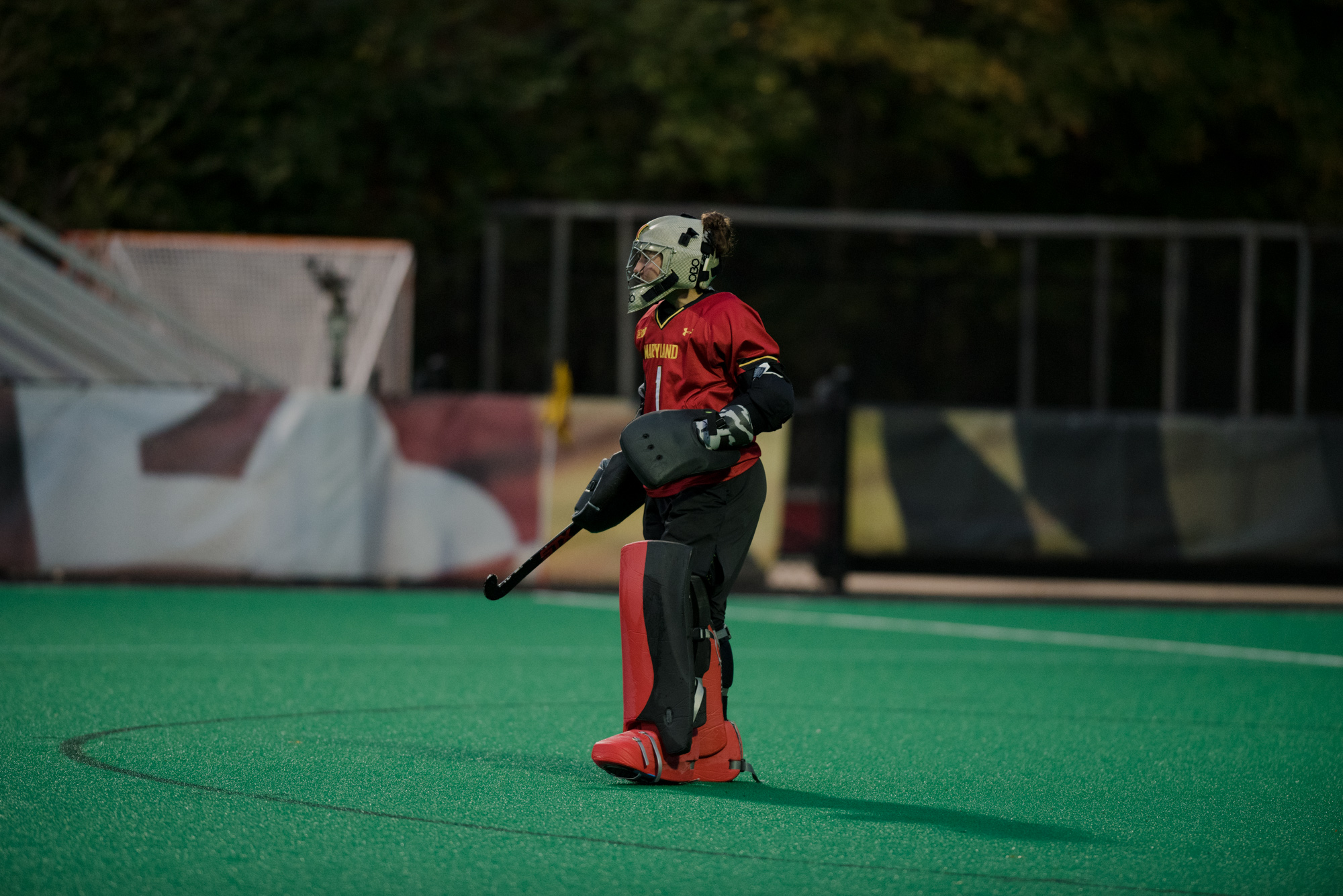 When the final horn buzzed on Maryland field hockey’s season, all defender Bodil Keus could do was look up to the sky.

Moments earlier, the Big Ten Defensive Player of the Year had been standing outside her goalmouth in overtime, hoping to fight off another wave of pressure from Virginia’s attack.

And as midfielder Annie McDonough fired an effort toward Keus, it seemed like another Cavaliers’ threat had been averted, with Keus getting her stick down quickly to deflect the shot out of danger.

But Keus was unable to divert the ball away from goal, and once the ball trickled past goalkeeper Noelle Frost, the junior looked on in despondency as the Cavaliers rushed to McDonough to celebrate their 1-0 win and impending trip to the final four.

“We’re disappointed,” Keus said. “We put our whole heart on to the field — every single girl.”

Defender Hannah Bond started on Sunday after taking a ball to the forehead during Friday’s matchup with Saint Joseph’s, giving the Terps a much-appreciated boost.

“I’m not surprised,” coach Missy Meharg said. “Hannah’s one of the toughest kids I’ve ever coached … no question, hands down, she has the heart of a champion.”

Meanwhile, forward Madison Maguire — the Big Ten Offensive Player of the Year — returned to the lineup after also sitting out Friday’s contest.

And while their leading goalscorer routinely occupied dangerous areas within the Cavaliers’ shooting circle in the first half, the Terps looked far less ruthless than they did in the second half of Friday’s game.

“The last two games really signified a dominance — a dominance from start to finish,” Meharg said, “We just didn’t finish.”

There was forward Jen Bleakney’s chance late in the first quarter — the graduate senior scampered into the circle after receiving a delicate feed from Maguire before skying her subsequent shot. And Keus sent a driven effort off a late penalty corner in the opening frame, forcing goalkeeper Lauren Hausheer into a diving save.

But in all, the Terps struggled to create much against a Cavaliers defense that entered Sunday’s matchup with the seventh-best defensive record in the NCAA.

Maryland’s defense, however, continued to impress after handing Saint Joseph’s potent attack its first shutout of the season, conceding two shots on goal in the first half — both of which were sent away by Frost.

“Our back five players — Noelle Frost, Bodil [Keus], Nathalie [Fiechter], Bond, and Kelee Lepage — that was our strength and our core,” Meharg said.

With neither offense looking particularly imposing in the game’s opening 30 minutes, halftime provided both sides with an opportunity to refresh and figure out ways to create dangerous scoring chances.

“We were very calm and composed,” Keus said. “We were in the game and our emotions were just [out].”

But in the third quarter, it looked as if Virginia had finally cracked the code on how to get past Maryland’s staunch backline, taking up increasingly threatening positions in front of Frost’s cage. The Cavaliers recorded five shots in the third, with Maryland’s defenders making a series of crucial blocks to keep the game scoreless.

For all of Virginia’s dominance, though, it was Maryland that came closest to finding a breakthrough. Keus, a constant threat on penalty corners, rifled a long-distance attempt at Hausheer. But as the ball dribbled to the Cavaliers netminder, it took a deflection, rising above her and toward the top-left corner of the cage.

At the last second, though, the ball struck the post, keeping the game deadlocked at zero as the game headed for the fourth frame.

And as regulation wound down, the Cavaliers continued to apply pressure on Maryland’s backline. Frost — among the top-five goalkeepers in goals-against average and save percentage in the country — continued to keep the Terps in the game, making six saves in the fourth.

“She’s just exceptional. She’s patient, and she’s a Terp,” Meharg said. “She will just defend that goal cage at wits’ end, and I’m just so happy she’ll be back for another season.”

However, the Glenwood native was helpless a minute into the fourth period, when McDonough flicked an effort beyond Frost’s grasp and into the back of the cage.

As McDonough celebrated with her teammates, though, the referees walked to the tent to inspect whether any Cavaliers attacker committed a foul in the build-up to the goal. And after deliberation, the referees returned to the pitch, signaling that the goal was disallowed and sending Maryland’s bench into pandemonium.

The Terps had new life, forcing an overtime period. But Virginia continued its pressure, and after Frost turned away one shot on a penalty corner attempt five minutes into extra time, McDonough wouldn’t be denied a second time, sending the ball over the goalline and triggering Cavaliers celebrations.

There would be no review this time, no life-line for Maryland to grab hold of. Instead, as their opponents spilled onto the pitch, the Terps ambled off it, their season done before the final four for the first time since 2016.

“[We] really showed up today, we were just unlucky,” Keus said. “That happens, we’ll get over it and we’ll try [again] next year.”