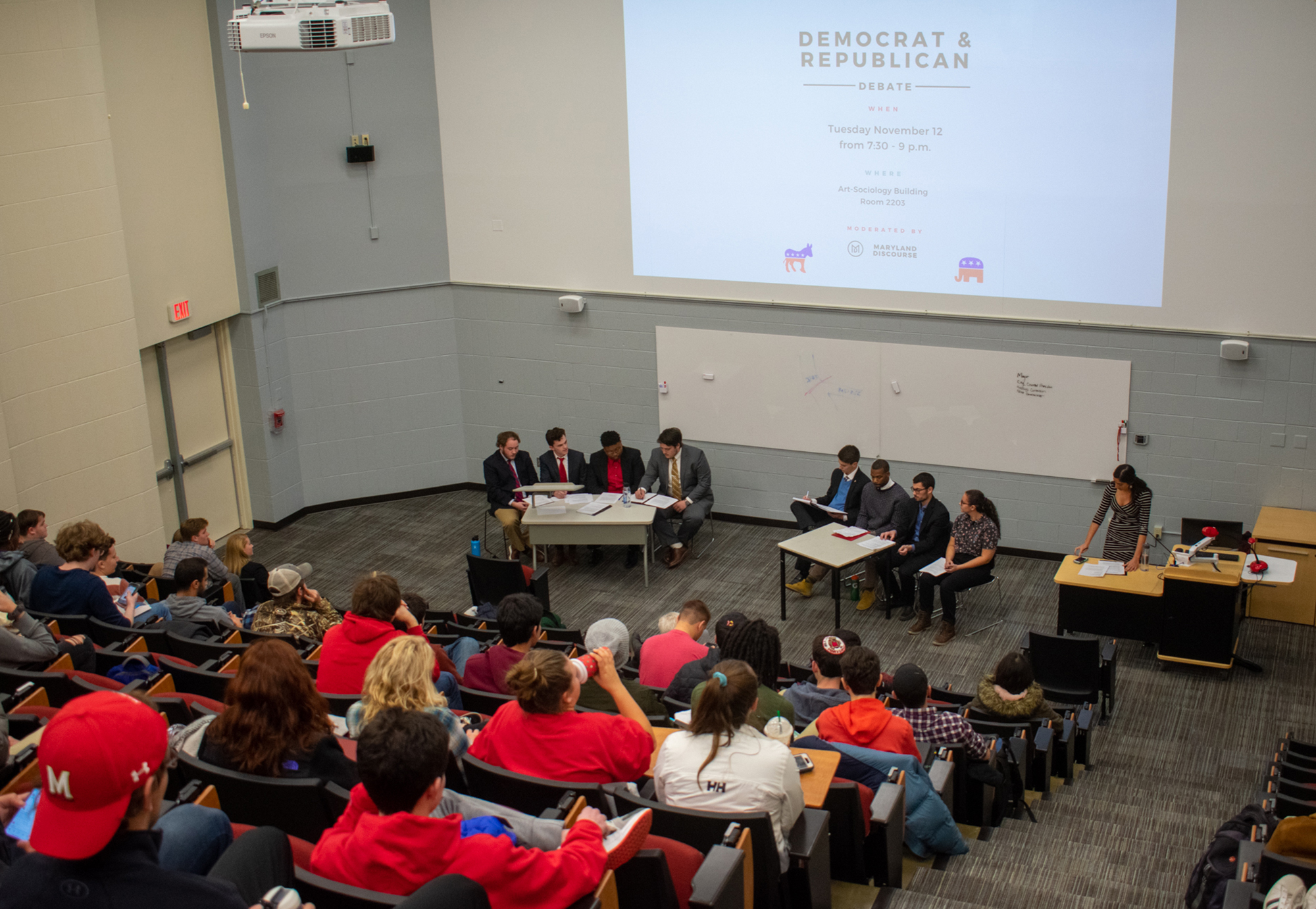 Kanika Mehra
For The Diamondback

At the University of Maryland’s annual debate between the College Democrats and Republicans, the impeachment inquiry into President Trump took center stage Tuesday night, alongside issues such as climate change and gun control.

Republican debaters said they supported a transparent inquiry into the president’s actions surrounding Ukraine, but felt that with the election less than a year away, it was up to voters — and not Congress — to decide the president’s fate.

Jake Meisel, College Democrats president, said the impeachment proceedings should continue, based upon the principle of rule of law.

“The Constitution doesn’t say high crimes and misdemeanor unless it’s an election year,” said the junior government and politics major. “The point is not to help Democrats politically. In fact, I don’t think impeachment is good politics. The point is we’re a country with laws.”

[Read more: Over 20 Maryland politicians endorsed Warren for president at a UMD event]

Several key figures in the inquiry are set to testify publicly before the House Intelligence Committee this week, where they’ll face questions about whether Trump withheld aid from Ukraine in the hopes of persuading the country to investigate former vice president Joe Biden — a leading Democratic presidential candidate — and his son’s business dealings there.

More than 70 students gathered in an Art-Sociology Building lecture hall to watch the event, which was hosted and moderated by non-partisan campus organization Maryland Discourse.

The group aims to promote healthy debate in a civil setting among groups with disparate viewpoints, said its president Selena Rawlley, a senior government and politics major.

“One of the ideas I’ve been thinking a lot about recently is this idea of community development … and how integral it is to combat the polarization in our country,” Rawlley said. “Teaching people about the shoes that their neighbors are walking in and how to reach across and understand why someone might be feeling a particular way … I think that’s essential for any healthy democracy.”

The hosts developed questions over the course of several weeks, with input from both the Democratic and Republican student groups, she said.

While there were references to statewide politics and Maryland Gov. Larry Hogan from Republican debaters, the conversation focused on issues currently dominating the national conversation, such as climate change and gun violence.

Some of the most contentious points of the night focused on specific legislation, such as the Green New Deal, legislation Rep. Alexandria Ocasio-Cortez (D-NY) introduced in February to address climate change through a set of goals seeking to globally reduce carbon emissions to net-zero by 2050.

The Democrat debaters insisted that the policy was intended as “a marker to start the conversation” and to catalyze tangible legislative action in Congress — something they felt Republican legislators have failed to accomplish.

Republican debater and sophomore finance major Joe Russo, agreed with his opponents on the urgency of the climate crisis, challenged this argument with one question: “If this is the most existential crisis of our time, why put out a policy that wasn’t going to pass?”

Another polarizing issue was voting rights for felons, as well as disenfranchisement and voter suppression, with the two groups disagreeing on the need for policies like Voter ID laws.

“You need an ID to buy alcohol, to adopt a pet, to buy cigarettes, to not have a common cold, and to get into [Cornerstone Loft and Grill] — not that I would know, I’m 19,” joked Hunter Petit, a Republican sophomore government and politics and information systems major.

Despite their clashes, the two groups demonstrated a surprising amount of agreement compared to their counterparts on the national stage. Once the debate was opened up to questions, junior Stephen Kenny, a government and politics major, noted this.

He asked the Republican debaters how they reconciled their “number of views not held by the national Republican Party establishment,” particularly on the subject of climate change.

“You join a political party as a young person in order to create change,” said Housman, a senior business management and government and politics major. “I think our counterparts in College Democrats would agree.”