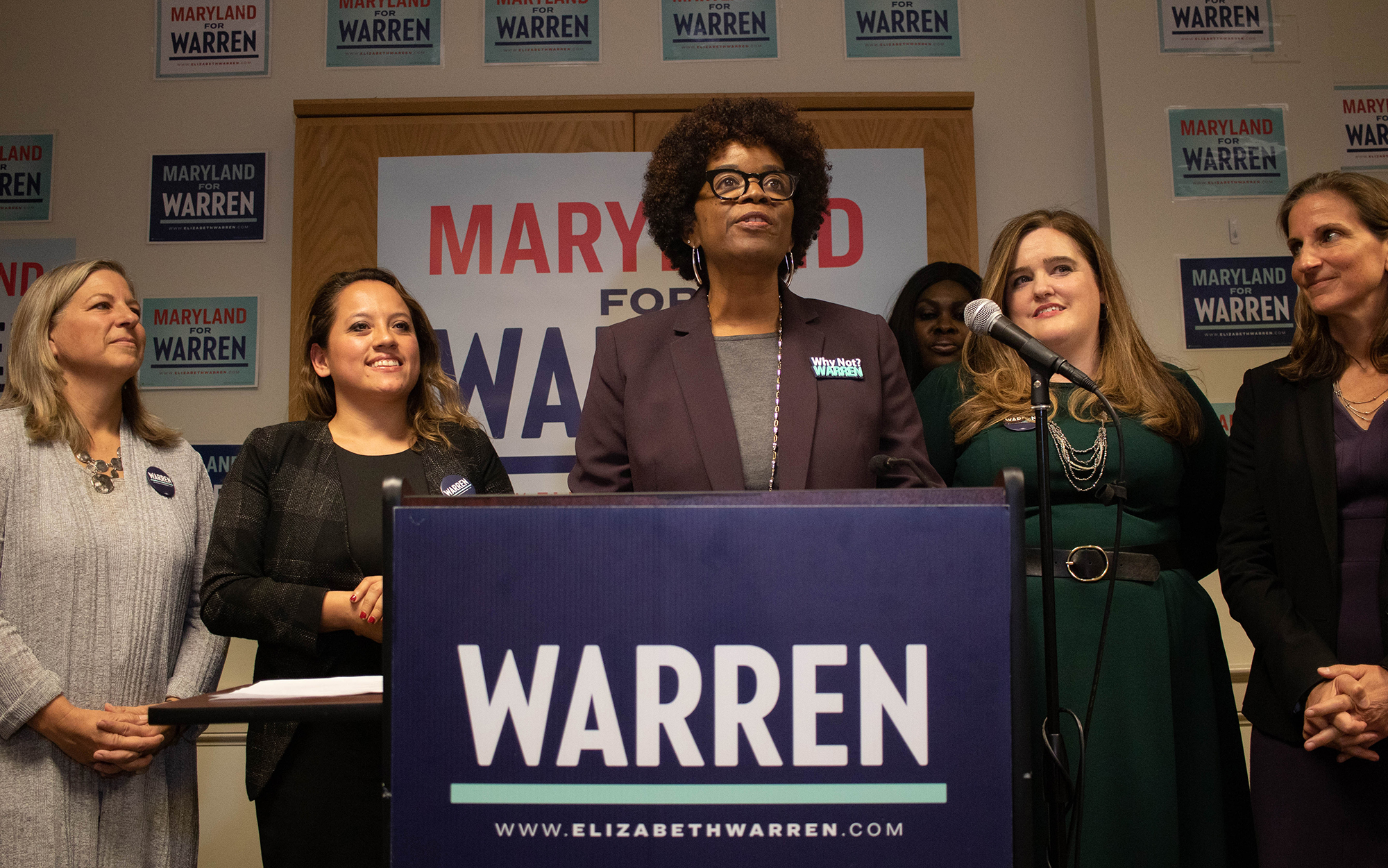 More than 20 state and local leaders endorsed Sen. Elizabeth Warren (D-Mass.) for president during an event at the University of Maryland on Friday.

In total, 25 leaders from seven Maryland counties and Baltimore City — including current and former council members, state delegates and state senators — were involved in the joint endorsement. Five of those were from Prince George’s County, including county council members Danielle Glaros, Deni Taveras and Jolene Ivey.

“She’s great on policy, but she also has the fire in the belly,” said former Edmonston Mayor Adam Ortiz, a Maryland for Warren volunteer. “She has the energy and determination in a very difficult political climate to make change.”

There are currently 17 candidates vying for the Democratic presidential nomination. Warren, who has painted herself as a candidate who will fight for “big, structural change,” has built her platform around progressive policies like higher taxes on the wealthy and “Medicare for all.”

Karylena Cruz, the president of this university’s Maryland for Warren chapter, helped bring the endorsement to campus. Cruz said she supports Warren because “all of her plans add up” and she’s “willing to take the lead.”

“It’s important that our delegates, … our state senators, our local leaders step up to the plate and make sure that they’re all voicing their opinions,” Cruz, a senior government and politics major said.

Ortiz, along with Maryland for Warren leader Robbie Leonard, began recruiting officials from across the state for the endorsement about a month ago, they said. Evan Glass, the councilman at-large for Montgomery County, also reached out to officials and was the emcee for the event.

Throughout the event, speakers shared personal examples and told stories about why Warren appealed to them.

Sharon Brackett, a member of the Baltimore City Democratic Central Committee, has the phrase “nevertheless, she persisted” tattooed on her arm. The quote is from Senate Majority Leader Mitch McConnell (R-Ky.), after stopping Warren from asking repeated questions about then-Attorney General nominee Jeff Sessions’ record.

Brackett, who is the first transgender elected official in Maryland, said that event inspired her.

“Lately we’ve heard some noise from other folks going like, ‘Well, she just talks about fighting a lot,’” Brackett said. “I sure as hell hope so.”

About 40 students and community members attended Friday’s event, which was held in Stamp Student Union. Cheers and exclamations from the crowd occasionally punctuated the speeches: Former state delegate Maricé Morales led a “This is what democracy looks like” chant, and there were often boos when President Donald Trump was mentioned.

Warren, who was a special education teacher and law school professor, has said she’d work to boost public school funding and improve facilities in school buildings across the country. Those goals spoke to Baltimore City Councilman Zeke Cohen, who said he worked in schools that lacked air conditioning and heat or had lead in their water systems when he was a teacher in the city.

“I taught in places that kids in the richest state in the richest country on Earth should not have to learn in. And I want a president who understands that,” Cohen said at the event. “I want a former teacher to be my president.”

And state delegate Ariana Kelly — the last speaker at the event — told the crowd that Warren inspired her to run for office.

As a television producer in 2004, Kelly was assigned a story about a book that Warren and her daughter had written. Even though she was in her dream job, she said, she was still “terrified” about slipping into poverty, just as her parents had been when she was growing up.

“When reading that book, I felt understood,” Kelly said. “She had a plan that spoke to me, that encouraged me, that inspired me, that made me realize that big, structural change was not only possible, but it was our mandate.”