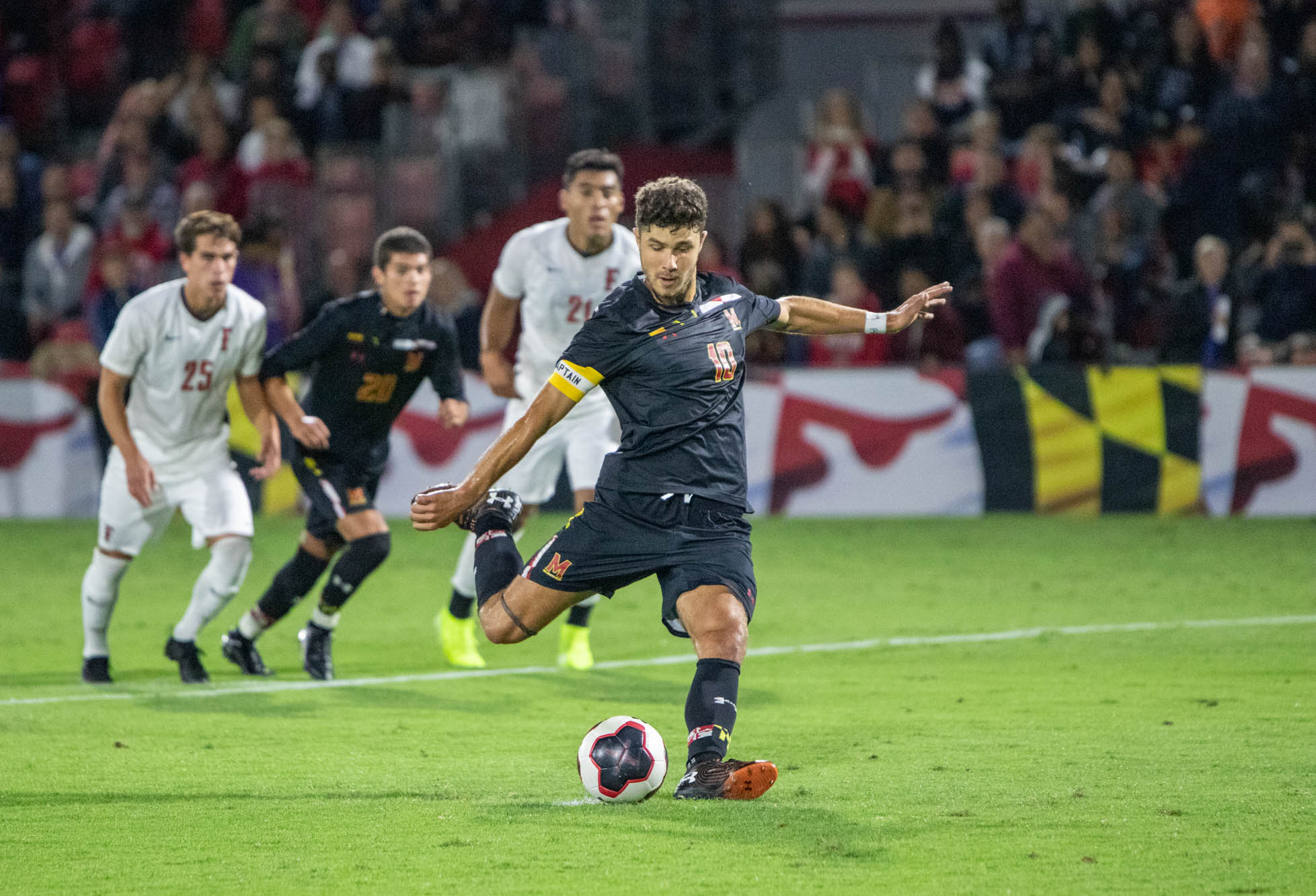 For much of the Big Ten tournament quarterfinal between No. 23 Maryland men’s soccer and Northwestern, the match appeared destined to be decided by penalty kicks. And in the end, it was — only one in regulation.

Both teams struggled to produce many meaningful chances in the final third during the elimination game, and the contest remained level as the clock ticked past 20 minutes remaining.

Then, Wildcats midfielder Matt Moderwell committed a foul inside the box, surrendering a penalty kick to the Terps.

Midfielder Eli Crognale stepped to the spot and sent the penalty shot past Miha Miskovic to lift No. 5-seed Maryland past fourth-seeded Northwestern, 1-0, and into Friday’s Big Ten tournament semifinal at Ludwig Field.

“Eli plays with confidence and swagger,” coach Sasho Cirovski said. “When the moment was needed for him to step up, he stepped up and there was no question about it — that ball was going in the back of the net.”

Northwestern enjoyed the majority of possession early in the game and used that advantage to fire three shots on goal in the first 20 minutes. Each attempt, though, flew right to goalkeeper Niklas Neumann, who made three easy stops.

Maryland’s attack, meanwhile, wasn’t as promising during the first 45 minutes. The Terps generated just two shots, neither of which were on frame.

Cirovski said after the game that wind played a factor in how the team played in the first half. With his team attacking into the wind, the lack of chances didn’t discourage the 27th-year coach, and he told his team at halftime that he liked the position it was in at 0-0.

“It was tough for us to get anything going, just because the wind was constantly blowing against us,” Crognale said. “We just made sure to get out of the half without conceding a goal, because we knew that the second half we were going to be with the wind.”

When the teams returned to the field following halftime and switched sides, possession swung into Maryland’s favor. With the newly established advantage, midfielder David Kovacic got to a loose ball to rifle a strong shot that deflected off the crossbar and out early in the second half.

In the 57th minute, Northwestern won the ball in the midfield and initiated a counterattack. Midfielder Vicente Castro floated a cross to the back post, where Ty Seager elevated above a defender to get a header off. The shot took a bounce before Neumann made a desperation save to fight off the shot and keep the match scoreless.

“I thought [Neumann] played very well,” defender Nick Richardson said. “He made a huge save for us in the second half to keep us in the game.”

Cirovski said his team didn’t want to concede a goal and have to play from behind against a tough Northwestern defense. With Neumann’s save, the Terps could push forward without that pressure.

In the 70th minute, Richardson — who played right back in place of Ben Di Rosa, who left the game early with a sickness, according to a team spokesperson — received a pass in the box and looked to make a move. But the redshirt freshman was stopped in his tracks because of a hard challenge from a defender that sent Richardson down to the field.

“I tried to flick it over [the defender], but they came in pretty hard on me,” Richardson said. “But I was glad to draw the PK for my team.”

When the official awarded a penalty kick, the Wildcats appealed the decision, while Crognale prepared to step to the spot. After converting the penalty shot, Crognale placed his pointer finger to his lips to silence the crowd while fellow Terps gathered around the senior captain.

The celebration preceded the ultimate celebration of coming away with the victory that sends the Terps back to College Park — the site of the Big Ten tournament semifinals and final — for a rematch with top-seeded Indiana, who Maryland beat 3-0 on Oct. 18.

“I feel it’s my responsibility to be that guy, and step up and take those PKs in big situations and big games like this one,” Crognale said. “I think it’s important to have the confidence, and that’s what I have, and I know my teammates trust me to step up and finish it.”

CORRECTION: Due to a reporting error, Matt Moderwell’s name was misspelled. This story has been updated.