Hampered by injury, Kyler Greenwalt has still been a key cog for Maryland field hockey 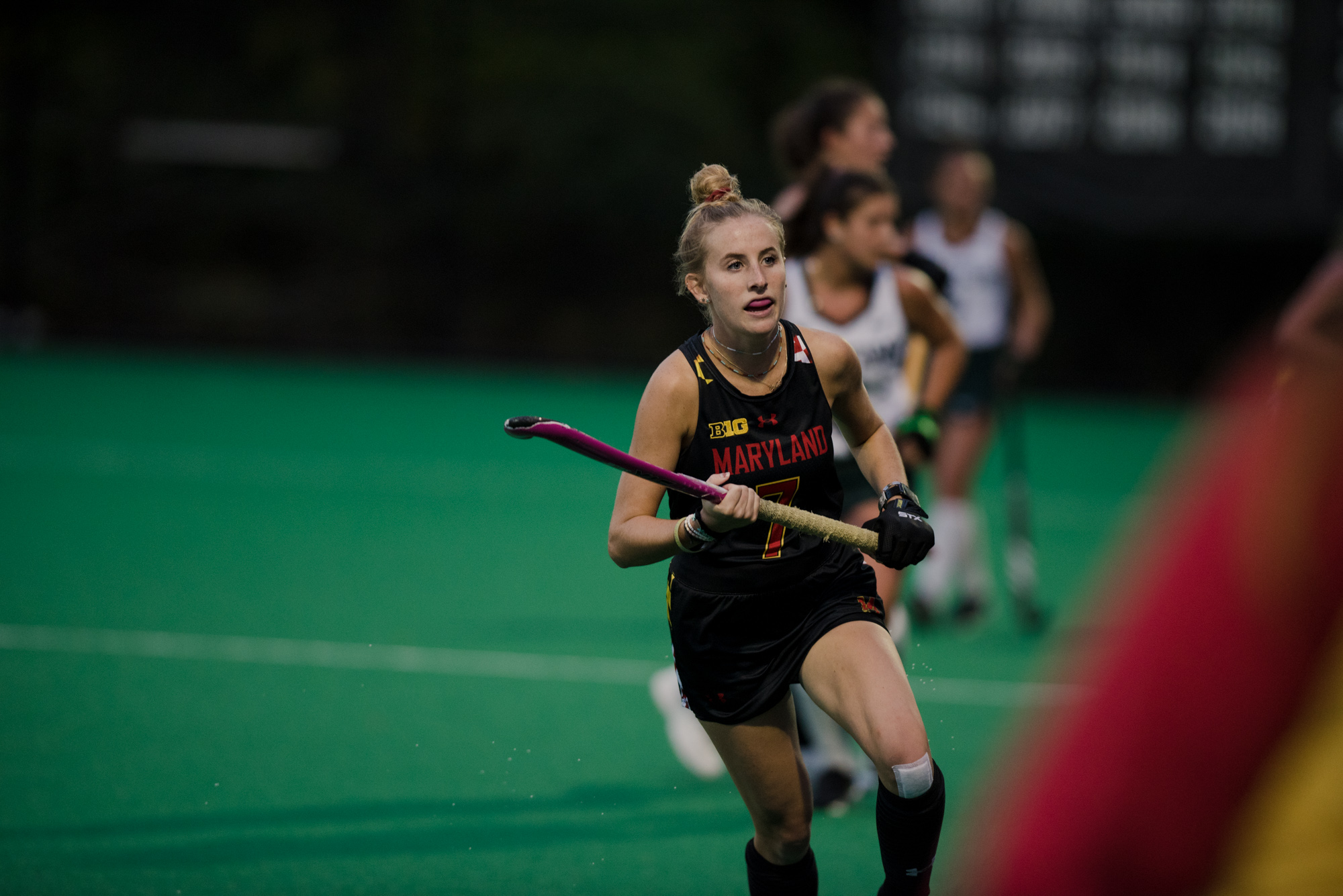 A year ago, Maryland field hockey forward Kyler Greenwalt hobbled around the Field Hockey and Lacrosse Complex sideline, her usual practice accessories of gloves and a stick replaced with a bulky knee brace.

Then a sophomore, Greenwalt tore her ACL a couple weeks earlier in the Terps’ 3-1 defeat to Virginia on Oct. 21. She yearned to return to the field that she had started on for much of her first two seasons in College Park.

So, Greenwalt spent much of the offseason focusing on strengthening her knee in an effort to get herself back into the starting lineup. Her focus was rewarded by coach Missy Meharg, who handed the Gambrills native starts in the first four games of this season.

Greenwalt has struggled with setbacks since, missing four games and racking up a total of 182 minutes in the past nine games. But despite the struggles, Greenwalt remains a crucial piece in the Terps’ fight for a second straight Big Ten tournament championship, with the junior’s positivity fueling Meharg’s squad.

“She’s the heartbeat of this team,” Meharg said. “We need her.”

Before her injury, Greenwalt shined on Maryland’s forward line, racking up nine goals and three assists in 41 games.

And after hobbling off the pitch on that brisk October day, Greenwalt aimed to return to a similar level of production, working closely with head athletic trainer Sandy Worth to design a rigorous recovery schedule.

“I knew it was going to be a long road, but wow,” Greenwalt said, “it was so much work.”

Greenwalt and Worth’s efforts paid dividends early on, though, and the forward found the net twice in Maryland’s opener — a 5-1 victory over Richmond on Aug. 30.

“I’m not surprised,” Meharg said after the game. “She did a ton of work this summer, she’s back in the opening lineup and she’ll only grow.”

But as the season progressed, there were signs that Greenwalt’s knee wasn’t at full strength. Sometimes it would cause her discomfort. Eventually, she relayed that information to Meharg, who decided to scale back the forward’s minutes in an effort to keep her fresh for postseason play.

“I’ve learned to really do what my body is telling me to do,” Greenwalt said. “If I start hurting, I have to rest. Otherwise, it’s 20 times worse the next day.”

Greenwalt’s absence provided her with an opportunity to increase her tactical presence within the team, dedicating her time to studying film to help Meharg’s squad make adjustments while on the sideline.

“When I’m off the field, I’m just trying to help people with the press,” Greenwalt said. “If I’m watching and I see something in the game that we didn’t see in film, I make sure that I tell the people that are going in.”

Greenwalt is constantly working with her teammates, directing them where to go and how to break down opposition defenses.

And even when barking orders at her teammates, she brings a smile — a testament to her bubbly personality that has remained despite a litany of injury concerns that have plagued her over the past year.

“Kyler always has some type of sunshine about her,” midfielder Kelee Lepage said. “Even with her injury, she’s never lost that.”

As the season rapidly approaches its crescendo, Meharg will look for Greenwalt to return to top form, with the junior seeing an uptick in minutes in recent weeks — she’s combined for 63 minutes in the past three games after seeing the field for a total of eight minutes in the five games before then.

And with Greenwalt’s sunny disposition and newfound tactical outlook, the Terps will lean on the junior as they embark on the journey for another piece of Big Ten hardware.

“She keeps that positive mindset and continues to bring that energy, even when sometimes it might not always be there,” Lepage said. “She’s a powerful player and very strong.”