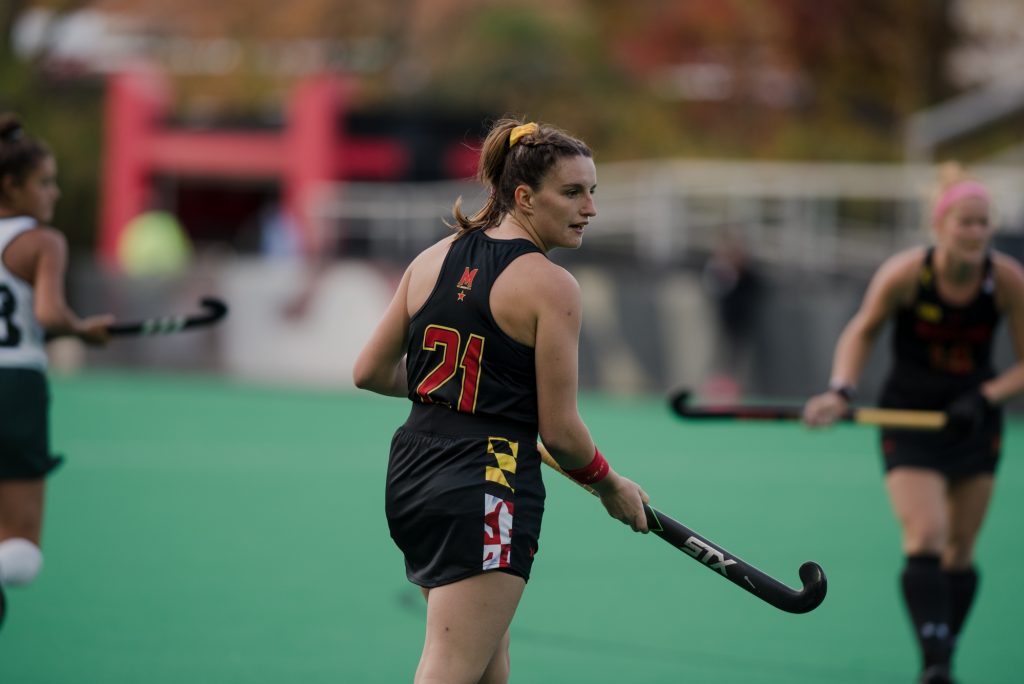 With Maryland field hockey and American knotted at zero in the fourth quarter, forward Madison Maguire nestled just outside the goalmouth in search of a breakthrough. She hoped to flick speculative efforts toward goalkeeper Fiona Minter, who had been largely untested up to that point in the defensive clash.

Midfielder Kelee Lepage took matters into her own hands, though, corralling a quick feed from midfielder Emma DeBerdine before rocketing a strike into the bottom-left corner.

As the ball rattled the cage’s backboard, Lepage sprawled out on the ground, having taken an awkward fall after shooting. Maguire rushed to her teammate’s side, lifting Lepage up while closely inspecting her gait as they walked back to their positions in the eventual 1-0 win.

Maguire and Lepage have developed a tight bond — one forged on a practice field in Pottstown, Pennsylvania for their club team — that has remained throughout their four seasons in College Park. And their chemistry has been central to much of the Terps’ success this season, especially in the attacking third.

“[We’ve played together] since the sophomore year of high school,” Maguire said. “On the field, we just know where each other is going to go.”

The two have served as stalwarts in Maryland’s lineup, combining for 45 goals and 47 assists over the course of their four seasons.

But their histories extend beyond the walls of the Field Hockey and Lacrosse Complex, with Maguire and Lepage first linking up in high school through X-Calibur, a prestigious club team known for producing Division I talent.

And the relationship remained as Maguire and Lepage swapped the violet and white of X-Calibur’s jerseys for the Terps’ red, black and gold, Maguire says — even after Lepage traveled to Germany last spring to learn about the European game.

Lepage has impressed since her return to Maryland, matching her goal tally from last season in six fewer games.

“She’s outstanding,” coach Missy Meharg said earlier in the season, “being able to go abroad and spend that time, and just learn the game in a different setting, in a different culture … she’s very exciting.”

Maguire’s role in the Terps’ offense has expanded, too, and she’s counted on to be one of the primary goal scorers in the squad.

The two seniors credit much of their success to each other, believing their close-knit relationship on and off the pitch has helped foster an innate understanding of each other’s positioning.

Three of Lepage’s six assists this season have been to Maguire — an indication of just how effective their partnership has proven to be this season.

On Friday against Michigan State, Maguire — hunting for a final goal to secure a Senior Day hat trick — drove in front of the net, desperately waiting for a chance to fall to her.

And as soon as Maguire flashed across the shooting circle, Lepage slipped the ball through the Spartans’ backline to find her. She made no mistake with the finish, whipping the ball into the bottom-right corner to secure her first three-goal game since 2017.

The Terps have struggled at times as the season has come to a close — particularly in their Oct. 18 defeat to then-No. 9 Michigan and against the Eagles on Tuesday, where they mustered two shots in the first three quarters.

But with Maguire and Lepage’s partnership flourishing, the rest of Meharg’s squad will fill with confidence as it prepares for the Big Ten tournament.

“We’re able to connect so well just because we’ve had that on- and off-field connection for so long,” Lepage said. “[It] just motivat[es] the rest of the team around us.”