No. 2 Maryland field hockey prevails in tight battle with American, 1-0 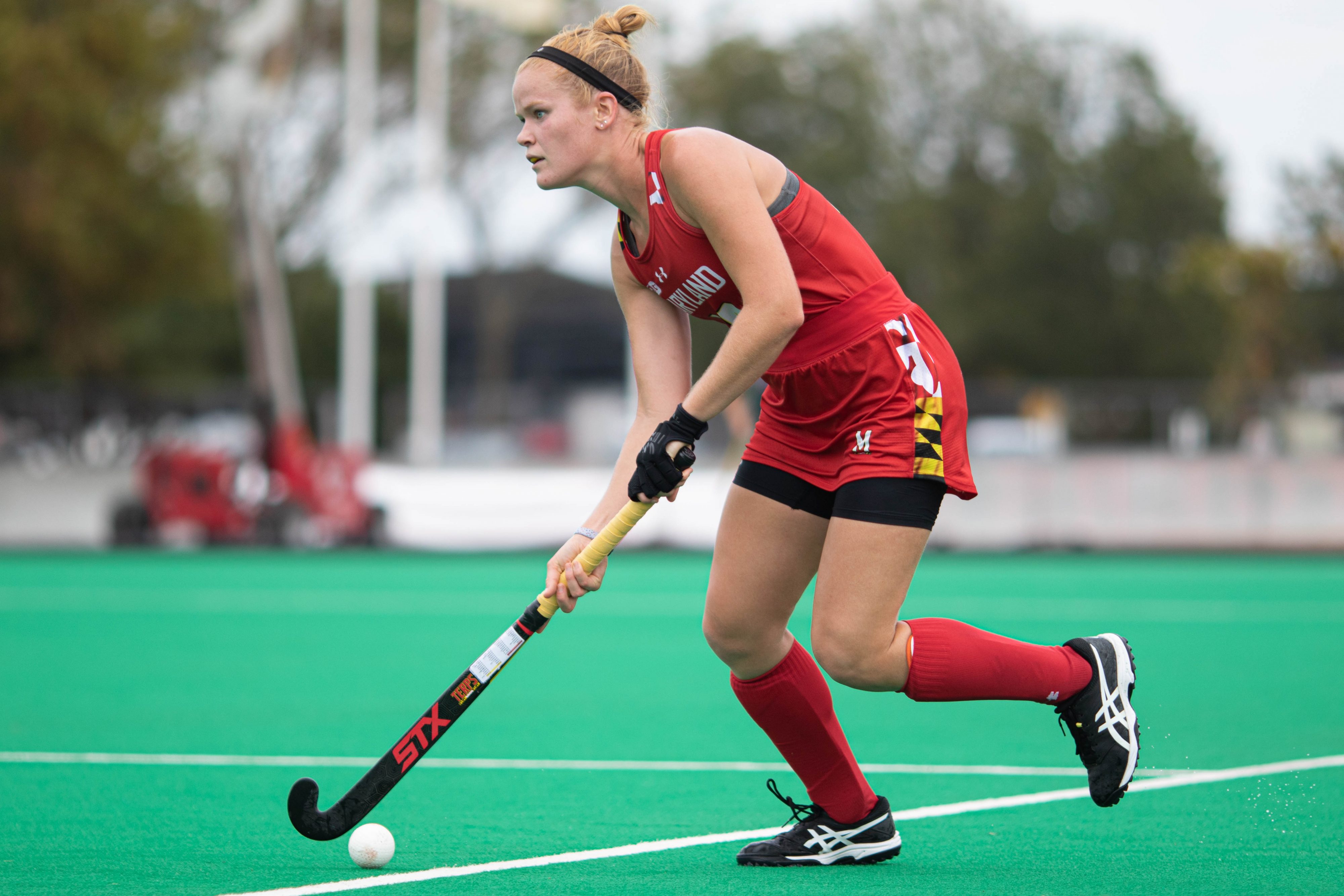 As soon as Maryland field hockey midfielder Kelee Lepage’s backhanded effort flew into the bottom-left corner of the goal, her teammates crowded her — hoping to mob the senior with hugs and high-fives after she had given the Terps a late 1-0 lead.

But as Lepage laid on the floor holding her leg, celebrations were hushed. The senior got up, though, grinning as she hobbled back to her position in the midfield.

While No. 2 Maryland struggled to break down American’s defensive unit on Tuesday, Lepage’s tenacious effort proved the difference. Her tally led the Terps to a tight 1-0 victory at the William I. Jacobs Recreational Complex in Washington, D.C.

“There was no way that I didn’t think [American] would be a test,” coach Missy Meharg said. “Every time we come down to D.C., it is a test, and it’s always a game like this.”

The Eagles — bolstered with confidence after demolishing Colgate 7-1 in a road matchup Saturday — got off to an inspired start, quickly racking up three shot attempts in the first five minutes.

While American’s attacking threat petered out over the course of the first quarter, its intensity remained, especially in the midfield and defense — limiting Maryland’s creativity by pinning the Terps to the sideline.

And when the ball would slip into the middle of the field, the Eagles’ midfield worked tirelessly to harass Maryland’s creative outlets, rushing attackers and forcing a bevy of turnovers.

“[American head coach] Steve Jennings and his players always play such a tactical game,” Meharg said. “Their change-ups in how they play defense in the front third and then fell away to the 50 … it prepared us in so many ways for postseason.”

Subsequently, the Terps failed to record a shot in the first frame — the second time coach Missy Meharg’s squad has been held shotless in a quarter in the past four games.

But it was a largely subdued first-half display for the Terps — a stark contrast to the prolific attacking display they produced against Michigan State on Friday.

And as the horn sounded for halftime, it was clear that changes were in order.

There was subsequent optimism in Maryland’s ability to ratchet their quality up in the third period, having combined for seven goals in the third quarter of their past two games — a testament to Meharg’s tactical nous and willingness to make adjustments.

And American continued to concede possession to the Terps — preferring instead to push its forwards back and defend in numbers.

It was one of those days for Maryland, where everything it tried was futile — best exemplified by midfielder Brooke DeBerdine, who flashed down the left flank before cleverly flicking the ball between her legs and across the goalmouth.

But just as it looked like a Maryland attacker could get a stick on it, two American defenders closed in, clearing the ball away and stifling another Terps push.

After a largely unimpressive three quarters, the final frame represented something of a kitchen sink approach for Maryland, which seemingly scrapped its possession mindset in favor of a more fluid and intense attacking gameplan.

Armed with this tactical shift, Meharg’s squad began to test Minter, with forwards Bibi Donraadt and Madison Maguire forcing the netminder into a trio of saves.

And eventually, Maryland found its breakthrough in the form of Lepage. With 4:48 remaining, the midfielder drifted into the shooting circle before firing a shot past Minter to give the Terps the late lead.

It was a lead that would stick, even as the Eagles drove down the pitch, hoping to equalize late.

With 49 seconds left, it looked like they might have found one, as forward Atina Pagani found herself with the ball on her stick and goalkeeper Noelle Frost well out of position. She flicked the ball toward the middle of the cage, looking certain to dash Maryland’s hopes and push the game to overtime.

But defender Bodil Keus stepped in front of Pagani’s shot, deflecting it away from goal and securing a hard-fought victory on what was an otherwise frustrating afternoon for the Terps.

“The nice thing about the game is that it prepared us in so many ways for the postseason,” Meharg said. “This is a game we’re going to be able to look at the video and say ‘Wow, we learned a lot from it.’”