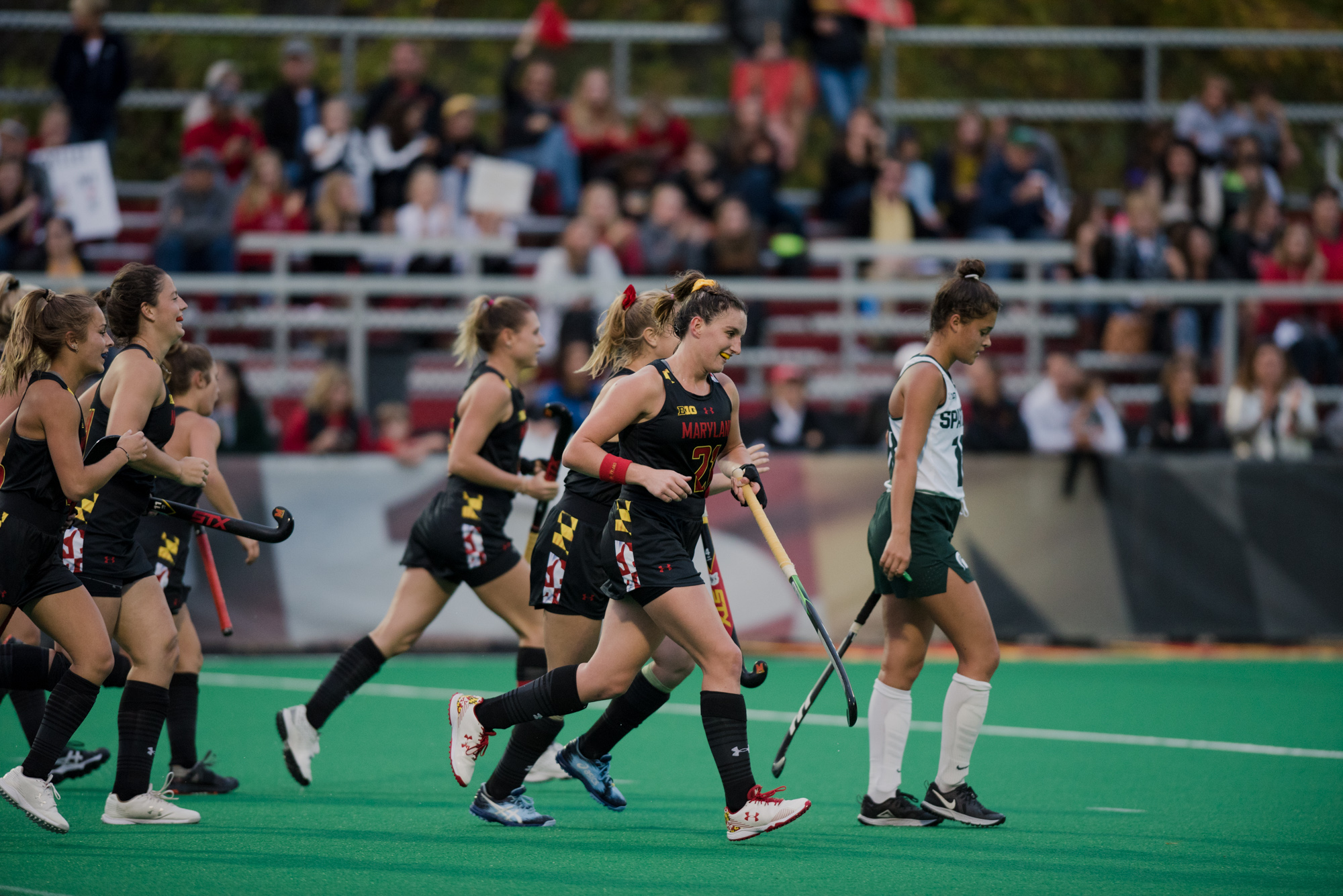 As soon as the final horn bellowed across the Field Hockey and Lacrosse Complex Friday, Maryland field hockey huddled at the center of the pitch, ghost-quiet save for coach Missy Meharg.

Meharg congratulated the team on its accomplishment — clinching at least a share of the Big Ten regular-season crown — before diverting attention to the Terps’ seniors.

Once the spotlight drifted to forward Madison Maguire, Maryland’s silence was broken, with the surrounding crowd of underclassmen roaring in appreciation for Maguire’s hat trick performance before giving her the “game shell” — an award granted to Maryland’s player of the game.

It was a memorable display for the senior, who has been at the heart of the Terps’ attack throughout her four-year career.

“Tonight, I think Madison played the best game off-ball — in her counter defense, work rate,” Meharg said. “When she plays like that, the rest of the front six respond off of her.”

Emotions were running high prior to Friday’s game, with Maryland’s seniors spending much of the preceding week reminiscing on their first three seasons in College Park.

Maguire was no exception, recalling the initial wobbles she experienced as a freshman while she adjusted to the heightened tempo of the college game.

“I only played on AstroTurf when we played with our club teams,” Maguire said earlier this season. “If you’re just on a high school team or a club team, you learn very quickly that you need to get the ball and give the ball. You have to receive it under a certain amount of time with pressure.”

But the Rumson, New Jersey native eventually found her way, becoming a crucial member of the midfield, starting 61 of her 71 games during her first three seasons.

Summarily, Maguire’s role in the attack was magnified. Her point total grew steadily in each of her previous three seasons, too.

“Madison is a basketball player by nature,” Meharg said. “She understands on-ball, off-ball and all the things [to] manipulate and get [herself] in position to score.”

The senior responded to the challenge of playing further up the pitch, scoring a team-high 12 goals so far to help push the Terps up to No. 2 in the rankings.

And Maguire was at the peak of her powers Friday, with teammates teeing her up with a series of slick feeds — trusting her ability to put pressure on Michigan State goalkeeper Jade Arundell.

The senior lurked around the goalmouth early, rocketing an early strike into the bottom corner to give Maryland the lead by the seventh minute of the game. And in the second half, Maguire helped secure the victory for the Terps, corralling midfielder Brooke DeBerdine’s fizzed pass before sending a shot into the bottom corner.

Late in the fourth quarter, Maguire secured her hat trick, backhanding a stroke past Arundell to record her first three-goal game since Oct. 22, 2017, against Rutgers.

Maguire’s performance was indicative of a player who has grown substantially over the course of her four seasons. And the Terps will be looking for more performances like Friday’s from Maguire, especially as the focus shifts to the postseason.

“I hope she can keep playing like that for the next three weeks,” Meharg said.