How have NBA Terps been in the first two weeks? 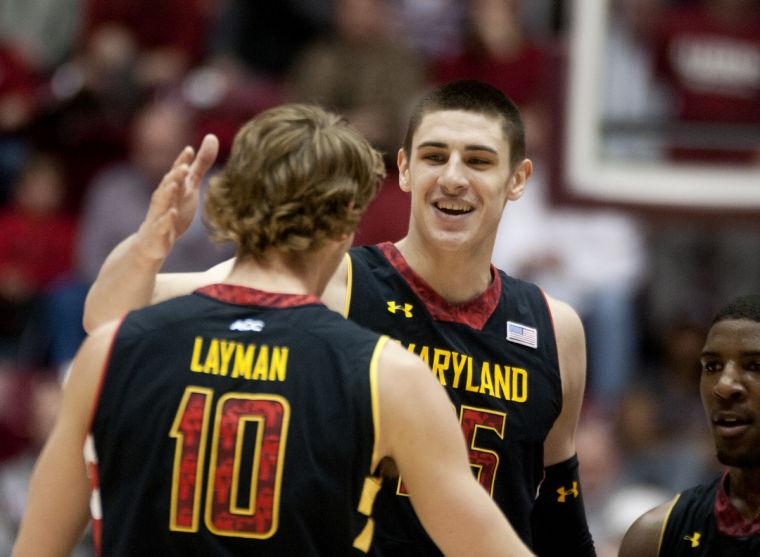 Center Alex Len with Jake Layman after Layman flushes an emphatic dunk in the first half.

It’s been a little over two weeks since the start of the new NBA season, and it’s been a mixed bag of results for former Maryland players.

Kevin Huerter has looked very rusty to start the season, which is to be expected. He missed all of the preseason with a knee injury and was on a minute restriction to start the season. He still isn’t completely healthy, and it has shown in his performances thus far.

In the Hawks’ first seven games, Huerter has scored just 7.1 points per game and has not shot the ball well at all. While he is usually a reliable three-point threat, he’s shooting an abysmal 26.9% on a little under four attempts per game. His field goal percentage isn’t much better, shooting at a 34.7% clip. He has looked better around the basket, as he’s finishing at a 66.7% rate from less than three feet, a slight uptick from 59.8% last year.

All of Huerter’s performances should be taken with a grain of salt due to the aforementioned knee injury. Alex Len, on the other hand, does not have an injury to fall back on.

Len has been one of the weakest players on the Hawks this year, and fans have already begun clamoring for him to be benched. He has just 28 total points and 31 total rebounds through seven games. His rebound rate is an astonishingly bad 14.1%, and he hasn’t had a game with more than six rebounds so far.

The biggest condemnation of Len’s poor play is how much better the Hawks have been with him on the bench. According to Brad Rowland, “the Hawks are 20.1 points per 100 possessions better with Alex Len on the bench (+4.5) than with him on the floor (-15.6).” Although Len’s 119 minutes played are a very small sample size, it’s clear that he is off to a very bad start.

After revitalizing his offensive game as a stretch-big last year, Len’s shooting has fallen off a cliff. He’s made just two of his 15 attempts from deep but has been decent inside the arc. He’s shooting nearly 50% inside the arc, which isn’t amazing but is also not bad.

Len’s backup, Bruno Fernando, has been a pleasant surprise as a rookie. Fernando has not played much, logging just 90 minutes, but has shown a lot of promise in that time. He’s been efficient on offense, finishing 88.2% of his shots around the rim and has flashed his three-point shooting. He’s only taken six threes and made two, but he’s been much more willing to shoot from deep than he was in college.

The final Terp in the pros has also had a pleasant start to the season. Jake Layman has proven to be a good bench piece for a surprising Timberwolves team. He continues to improve from beyond the arc, shooting 34.6% on 3.7 attempts per game, compared to 32.6% on 2.5 attempts per game last year. The rest of Layman’s offensive game hasn’t been great, with a 38.7% field goal shooting and a 4.1% assist rate coupled with a 11.0% turnover rate.

Defensively, Layman has been crucial for the Timberwolves. He’s averaging roughly two steals per 100 possesions and has a very impressive 98.5 defensive rating. He’s also become an early fan favorite in Minnesota, with many fans wanting him to start over Treveon Graham.