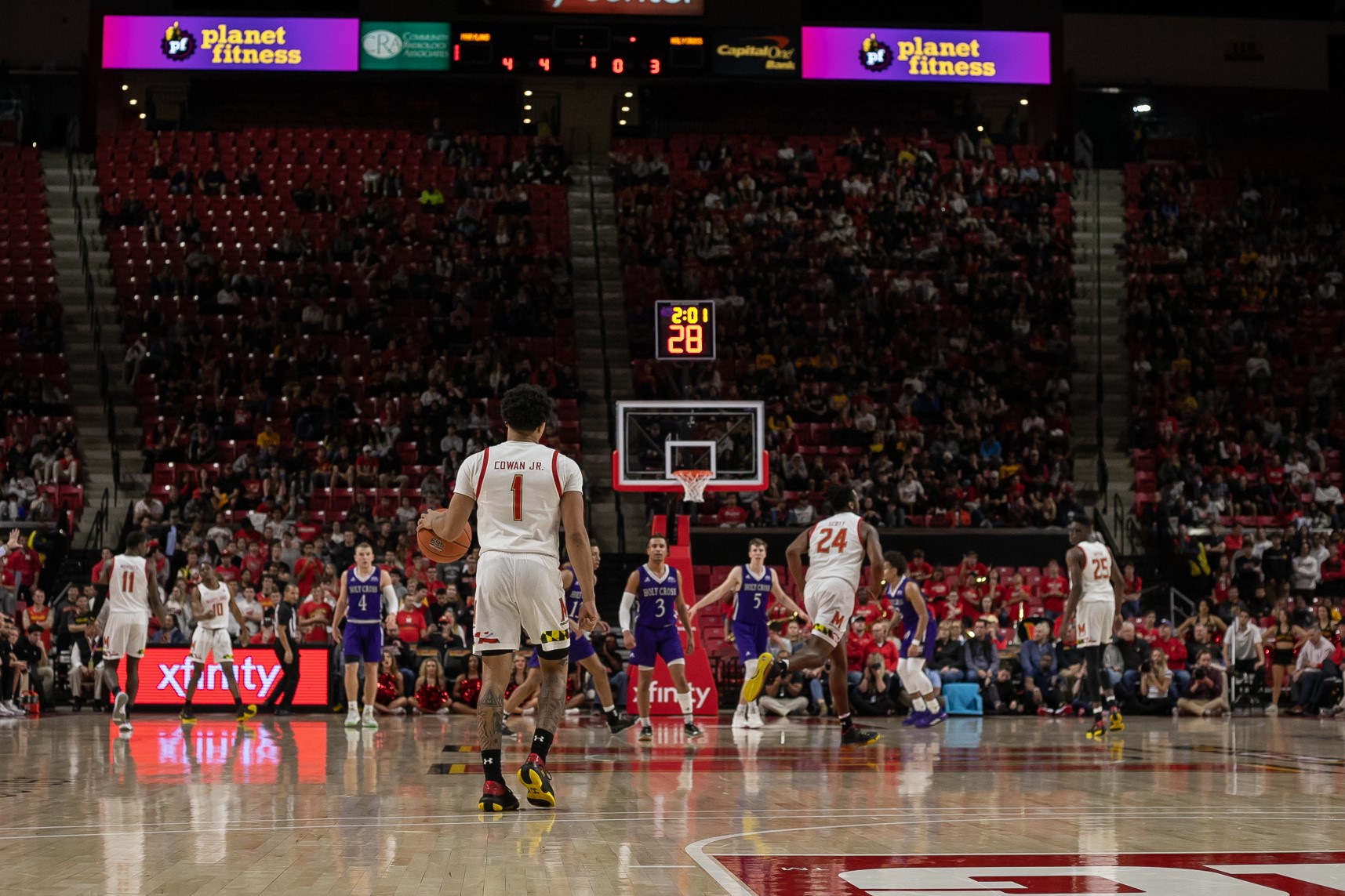 No matter how this Maryland men’s basketball season ends — be it in mid-March or when the calendar flips to April — it needs to start some way. And it started Tuesday night at Xfinity Center, in front of a half-filled arena against an overpowered Holy Cross squad, with Anthony Cowan holding the ball.

When it ends, some five or more months down the road, the Terps will hope it’s their senior guard with the ball in his hands then, too. There’s a feeling around this team — and perhaps most of all within No. 1 — that Cowan’s performance will drive that of his squad.

Cowan led the way in Tuesday’s 95-71 win against the Crusaders, a game that was close for the first eight minutes before getting away from the visiting team. The Bowie native posted 12 points and five assists in a team-high 30 minutes, darting to the rim and finishing through traffic or dishing to his teammates.

“He’s an individual who just leads by example,” guard Darryl Morsell said. “He comes in every day, he’s consistent throughout every game. He’s just consistent.”

Cowan facilitated most of Maryland’s good, especially early on when it was clear the Terps didn’t have much of an idea what Holy Cross would look like, having no tape on a team with a new head coach.

Two minutes into proceedings, Cowan’s back-door cut led to the first points of his season. And two possessions later, he drove the lane and finished inside. At that point, the Crusaders held a lead, Maryland’s offensive looked shaky and its defense appeared porous.

That would change after the under-12 timeout, with an interception from Morsell on a nonchalant pass from forward Marlon Hargis on Holy Cross’ side of the floor leading to a dunk and an 8-0 run, which included a ferocious put-back dunk from forward Donta Scott. Maryland never looked back.

“We got better defensively as the game went on,” coach Mark Turgeon said. “Our depth finally got them.”

Before halftime, there Cowan was again. After forward Jalen Smith blocked a shot with a few seconds to go, Cowan corralled the rebound, pushed the pace and dished to Morsell for another throw-down. The sequence, bringing the Xfinity Center crowd to its feet, gave Maryland a 51-39 edge at the break.

It’s those moments Cowan will lean on this season, hoping to turn balanced play into wins. At practice Monday, he recalled feeling ecstatic over scoring 15 or so points when he was 7 or 8 years old. His father quickly put a damper on those emotions, though.

Cowan has led the Terps in scoring the past two seasons anyway, and he began the 2019-20 slate strong as well. Against Holy Cross, Cowan had plenty of help, too.

Morsell finished with 15 points, and Smith posted his first double-double this season (16 points and 11 boards). Ayala added another 12 points and Scott looked lively off the bench with nine points and six rebounds.

“Donta’s different. He’s like a bull,” Morsell said. “He’s always giving 100 percent. He crashed the offensive glass every time. He just plays hard, he knows how to play. It’s the Philly in him.”

While Maryland dominated down low, scoring 64 of its 95 points in the paint, Turgeon’s squad converted just 5-of-27 attempts from beyond the three-point line.

There are always things for a coach to nitpick on, and Tuesday’s game was no different. Holy Cross guard Drew Lowder was a thorn in the Terps’ side, converting 10 of his 19 attempts for 24 points in his college debut.

“He was really quick, really could finish,” Cowan said. “He really played tonight. Lot of respect to him.”

Cowan and Co., though, never truly seemed troubled after the under-12 stoppage in the first half, starting out the 2019-20 slate with relative ease.

Still, Cowan’s missing that big one, the marquee victory in a high-pressure situation. Tuesday is about as far from that as it gets. But a comfortable season-opening win is a means to an end — whatever that end may be.