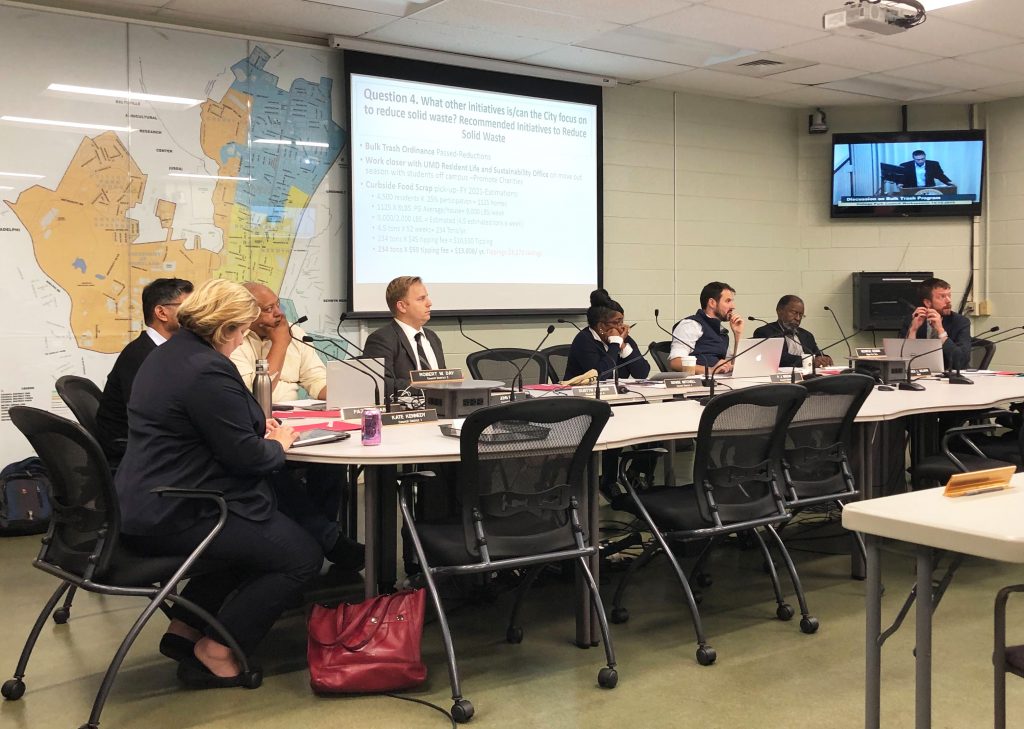 College Park City Council members listen to a presentation during their work session on Oct. 15, 2019. (Angela Mecca/For The Diamondback)

In this year’s city council election, College Park voters will be asked to weigh in on potential changes to mayoral and council member term lengths.

The council agreed in July to add two questions to the election’s ballot: one asking whether constituents think terms should be extended from two years to four and another asking whether elections should be staggered if terms are lengthened.

The council decided to add the questions to the ballot after it received a report in May on the topic from the Charter Review Committee — a 10-member committee created to evaluate the pros and cons of longer term lengths.

Current and former council members, including Mayor Patrick Wojahn and Councilman John Rigg, both said they support extending terms to four years because turnover, frequent elections and campaigning made it difficult to pursue long-term projects.

When council members have to campaign every two years, it is hard for them to think in the long term, he said. And, according to the report, four year terms would also save costs related to the time staff spends onboarding new members.

“It always feels like we’re scrambling to get as much done as we can before the next election,” he said. “We don’t know whether the initiatives that the council is currently undertaking will be able to continue, or whether the next council will go in a different direction.”

However, some residents had other thoughts about this proposed change.

The committee collected opinions online and at two public forums, receiving 94 public comments about the proposed change. Of those comments, 82 were against extending term limits.

Some residents were concerned that the four-year term may reduce voter engagement, student participation and accountability — as well as discourage newcomers and students from running for council.

Resident David Dorsch added that extending terms would also mean residents would have to wait longer to vote out council members they don’t like.
“I don’t see it’s necessary to change this,” Dorsch said. “It has worked well for us for the last 40 or 50 years. Just because some other jurisdiction changes, doesn’t mean we need to change.”

The second question will ask voters whether they support having concurrent or staggered elections: meaning, either one election every four years, or staggering terms so that only half the council members are elected every two years.

“You would have the ability to respond,” Williamson said. “Let’s say students, or even residents, voted for somebody; they don’t like how things are going on the city council. Two years later, they could at least change one of the two people in their district. They have an opportunity to do that.”

However, staggered terms means the council would need to change existing bylaws in their charter. Currently, candidates are prohibited from running for two positions at the same time or holding another office while they already have one. If the bylaws were to remain the same, staggered terms could give some candidates an unfair advantage in running for mayor, since the ends of some council members’ terms may not align with the mayoral election.

“Right now, our charter doesn’t contemplate anything like staggered terms,” city clerk Janeen Miller said in March. “But all of this is going to require a charter change. So it’s going to take some thought.”

Concurrent terms could also reduce election costs by half, the report said, since the city would host half the number of elections it currently runs.
In the report’s conclusion, the committee challenged the city to answer a key question — which measure would encourage more people to participate in College Park’s government, and what would get more people to turn out for city elections.

“The answer to that question was beyond the scope of the Commission,” the commission wrote, “but it is something to bear in mind as we all attempt to make the City of College Park’s government more responsive and capable, and, in turn, make the City a better place to live.”