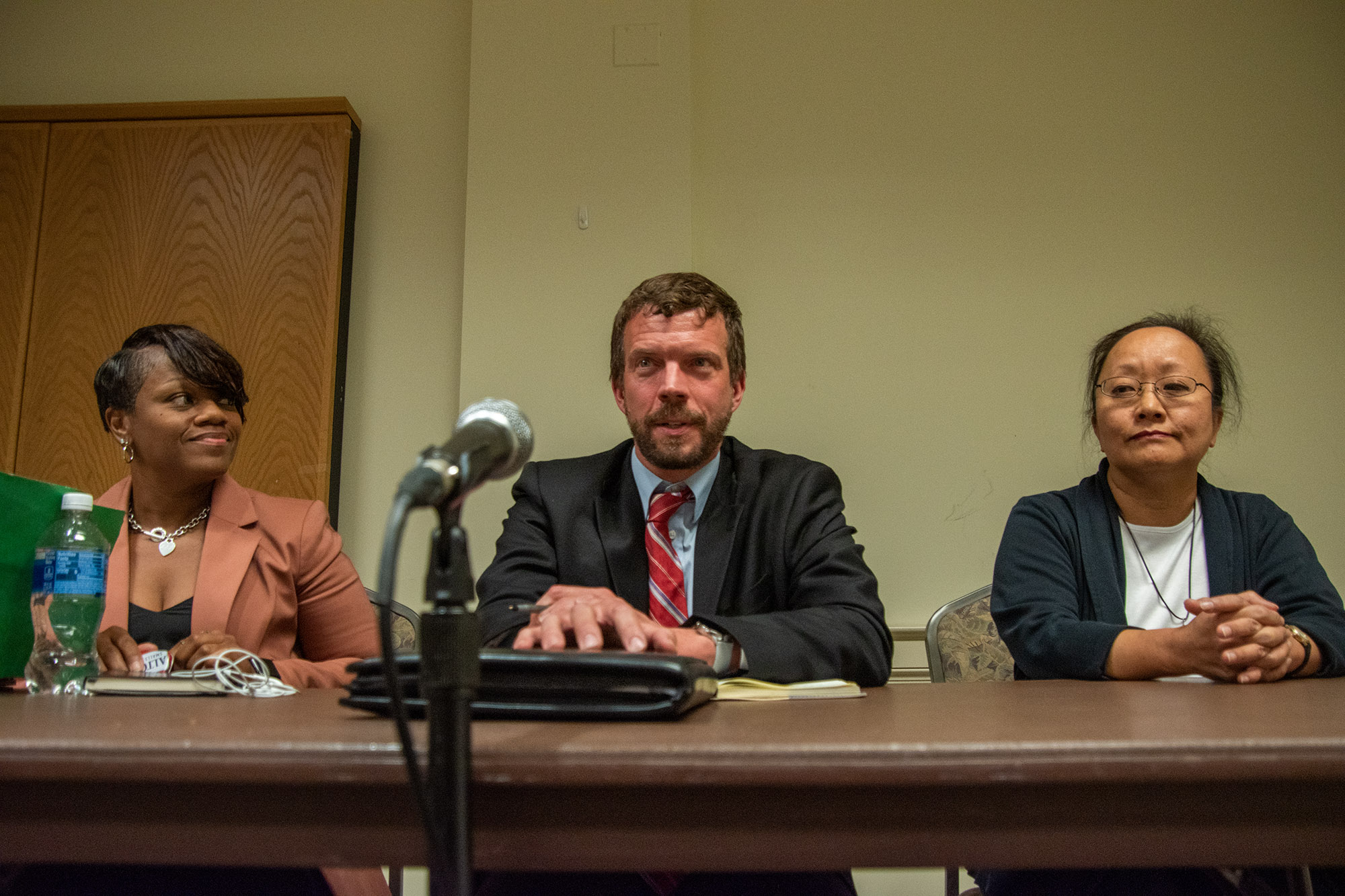 University of Maryland students asked College Park’s three mayoral candidates questions about issues such as affordable housing and the recently-passed nuisance ordinance at a forum Monday night in the Stamp Student Union.

About 25 students showed up to the Student Government Association-hosted event, which comes about a week before the city’s elections. After opening statements from the candidates and a couple questions from the event moderator, attendees took pieces of white paper that were sitting on their chairs and wrote questions.

“We have and will continue to explore options to bring affordable housing to students,” Wojahn said.

Still, he added, the city’s abilities are limited. It doesn’t have zoning and planning authority or the same subsidies and programs the federal government has to provide affordable housing, he said.

Malsawma echoed Wojahn in saying that housing affordability is the biggest concern for students but added that this university should fund quality housing rather than just affordable housing.

“I hear that there are … dormitories that don’t have air conditioning,” Malsawma said. “I think that’s unacceptable.”

In addition to housing, students expressed their concerns about the new “unruly social gatherings” ordinance. Attendees reacted passionately when the issue was brought up, snapping their fingers and applauding at different moments of discussion.

Under the ordinance, gatherings of eight or more people engaging in a list of activities — including underage drinking — are banned. Residents found in violation, and their landlords, can be fined hundreds of dollars. The ordinance passed at a council meeting in late September, and the three-hour meeting attracted dozens of students and community members.

Nikesha Pancho, who is also running for the post, drew applause with her response to a question about the ordinance.

“I feel as though this ordinance tells you to go downtown and drink a lot because you can’t gather at your homes. I have a problem with that,” Pancho said.

She added that residents should be smart enough to keep themselves in check and “follow the rules.”

Wojahn, who said it is no secret that he supported the ordinance, said he feels that there is a large misunderstanding about its true intent.

The mayor said the ordinance is aimed at holding “the worst of the worst” accountable, such as the people who are disturbing their neighbors or vandalizing the community.

“The unruly social gatherings ordinance is not going to impact but one or two percent of the residents in College Park,” Wojahn said.

Malsawma agreed, saying that the ordinance addresses behavior that no residents want in the community. She said students of the “caliber” of this university should know how to behave themselves.

Attendees also asked questions about diversity in the city.

Pancho said inclusivity is something that the community should value, regardless of people’s differences.

“It’s important that as a community we embrace, and that we keep our hearts open and our minds open to everyone’s religion, race, color, sex, it shouldn’t matter. We are supposed to love each other. No matter what,” Pancho said.

Wojahn, College Park’s first openly gay mayor, emphasized the importance of equity. He talked about his time on the board of directors for Equality Maryland, and how he was one of the plaintiff couples in Maryland’s marriage equality lawsuit.

Malsawma said she wants people to “see one another as human beings, created in the image and likeness of our creator.”