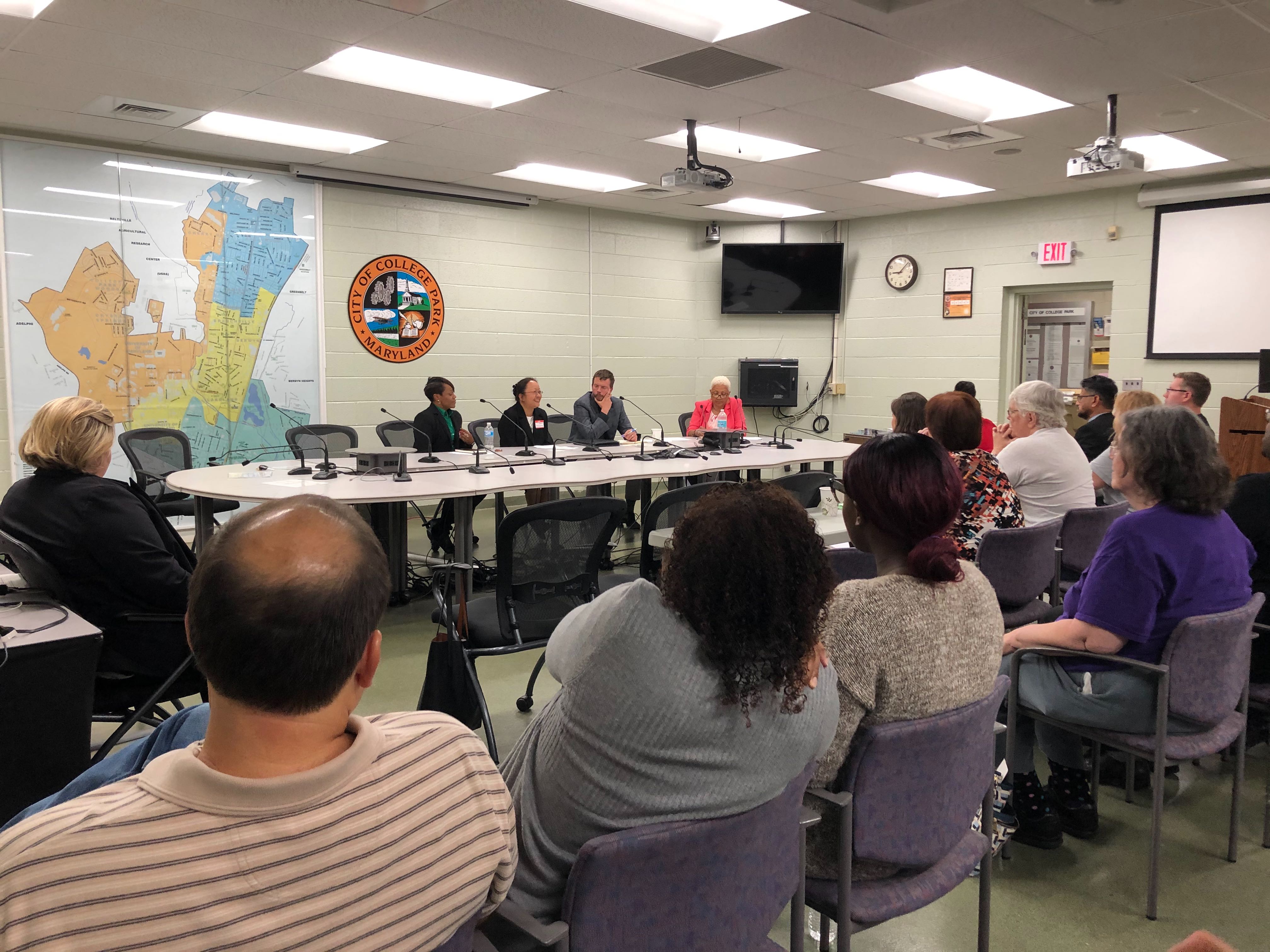 Candidates for College Park City Council discussed a wide range of issues at a forum on Thursday, Oct. 10. (Angela Mecca/For The Diamondback)

At a forum for the upcoming College Park elections Thursday evening, candidates for mayor and Districts 1 and 4 talked topics ranging from city spending to city safety.

The eight candidates discussed the merits of creating a College Park police department, and argued whether the budget for constructing a new City Hall — which will cost the city nearly $21 million — would be money well spent.

The North College Park Citizens Association hosted the forum, which was structured as a Q&A session. Each candidate was allowed two to three minutes to respond to questions the association volleyed.

But first, they introduced themselves, and explained why they were running for the council. Many, such as current District 4 council member Denise Mitchell, said they made the decision to better the place where they live.

“This is home to me. And I want to make sure that if elected again, that I am able to carry out the duties and responsibilities as a council member,” Mitchell said.

When the conversation turned to the creation of a police department specifically for College Park, Kabir immediately expressed his support. Previously, he said, the council conducted a study that showed the city would benefit from having its own department.

Currently, a combination of several entities, including the University of Maryland Police Department and the Prince George’s County Police Department, share jurisdiction over parts of the city, but College Park doesn’t have a department solely devoted to covering its four districts.

“I am really passionate about having a College Park police department,” Kabir said, adding that when people come to live in a city or town, they look at two things: the education system, and the police system.

Mayoral candidate Pancho agreed. During the mayoral forum, the candidates were asked what they would do with a million dollar grant, and Pancho said she would use the money to establish a College Park-specific police department.

“I would feel safer if we did have better policing, and many of our residents agree,” Pancho said.

The conversation circled back around to money when each of the candidates were asked for their thoughts on the budget for the City Hall renovation, which is set to be completed by 2022.

The project — which is projected to cost a total of $40 million, according to Wojahn — is jointly funded by the University of Maryland and the city, with the city paying for about half. The current City Hall, located on Knox Road, will be renovated along with the area surrounding it.

Kennedy called the project “long overdue,” and said that its renovations will benefit the community by making Route 1 more than a bypass. But many candidates had concerns with the construction’s price tag, which Kennedy said the city plans to borrow about $12 million for.

If Emmanuel had been on the council when the budget for the renovations had been approved, he said he would have asked where the borrowed money was coming from, and how the city is going to pay it back. Still, he acknowledged the renovations seemed to be much needed.

“I myself have been to the College Park offices, and it is not attractive, not very conducive to work,” Emmanuel said.

Mayoral candidate Malsawma also expressed doubts about City Hall’s design. If she had been on the council at the time of the decision, she said she would have voted against its budget. The design discussed for the hall is not what she had in mind, she said.

“We keep talking about how diverse the city population is. We never talk about how we celebrate that diversity,” Malsawma said. “And in my imagination, City Hall would be a hub where we can do that, and I don’t see that happening at all.”

The three mayoral candidates also explained their stances on whether term lengths for council should change from two to four years. This issue — which has received much discussion at public forums — will be an advisory question on the ballot this year.

Malsawma said she would support four year terms if council members were restricted in the number of terms they could hold. Wojahn and Pancho both said they would be supportive of what residents decide.

“Before you know it, you’re up for reelection,” he said.