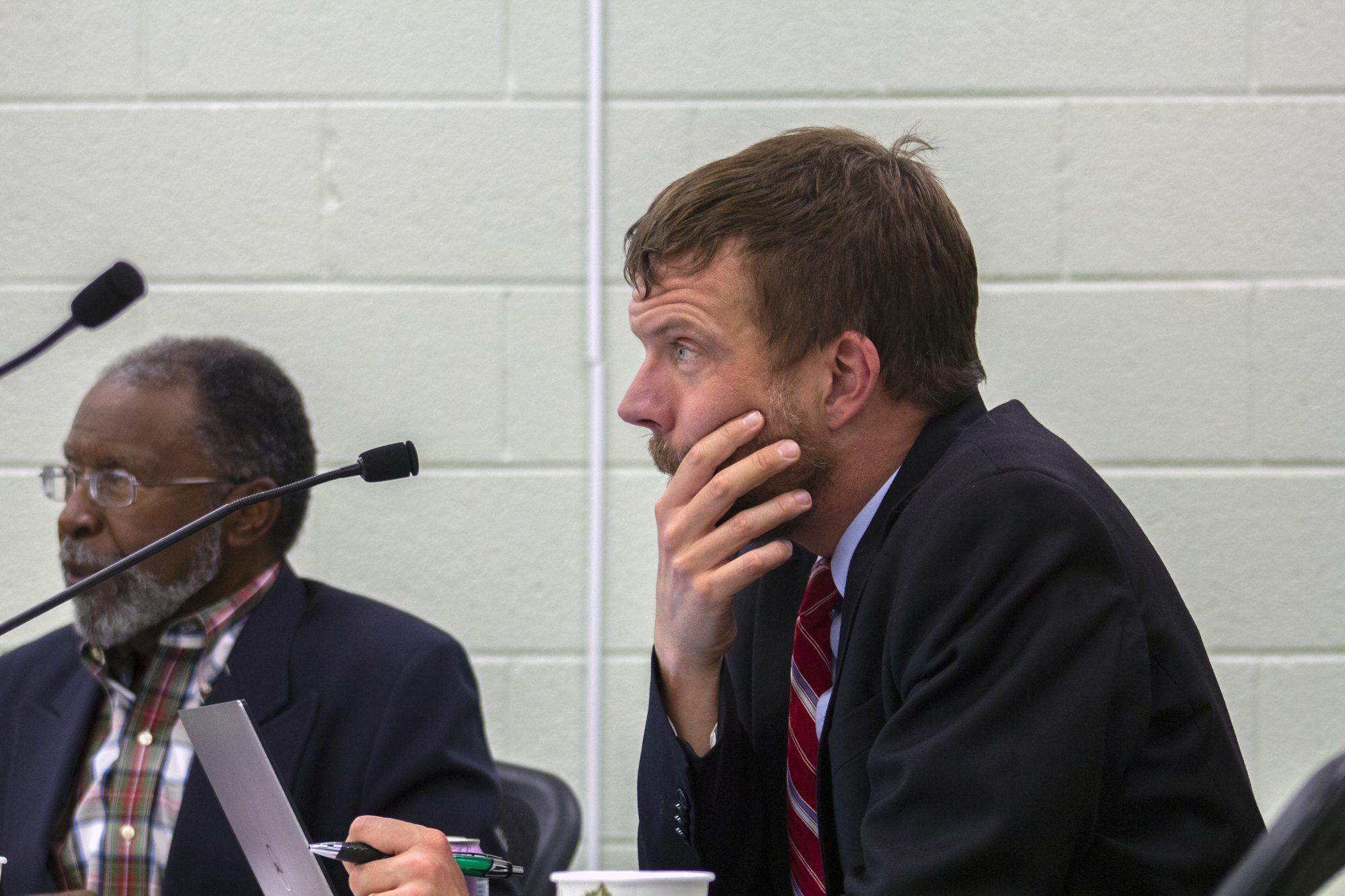 Mayor Patrick Wojahn listens while an amendment is proposed to the Pit Bull Ban, an “outdated” local ban on the dog breed. (Julia Lerner/The Diamondback)

The College Park City Council decided Tuesday to send a letter to the Prince George’s County Council recommending it remove a countywide ban on owning or keeping pit bulls.

For some who spoke at the meeting, this decision was a step toward having loving, loyal dogs live in Prince George’s County. But others raised concerns that the breed could be particularly aggressive.

The ban is currently part of the county’s Animal Control Ordinance. A revised version of the ordinance was presented to the county council in September and has been referred to a county committee.

While the committee is set to meet this Thursday, city council members such as Kate Kennedy pushed for the letter to be sent on Tuesday in hopes it would have more of an impact on the decision.

“To move this forward tonight means we actually have influence over this,” Kennedy said.

Kennedy introduced the letter at Tuesday’s meeting. While she said she understands the ordinance was created with public safety in mind, she pointed out that there are dangerous dogs of all breeds — not just pit bulls.

Of the six people who spoke on the issue, about four agreed with Kennedy, while the others supported the ban’s continuation.

Stephanie Butler, who lives in College Park, was one of the proponents for maintaining the current ordinance. She said she has had “hands-on experience” with pit bulls, as she once fostered one.

“Having a pit bull is like playing Russian roulette with the lives of your family and that of your neighbors,” Butler said.

On the other hand, Scarlet Jimenez, a long time College Park resident, said she is proud her city is speaking up against the ban. As a dog owner, she views animal behavior as linked to how its owner trained it, not tied to its breed.

Linda Lachman, a resident of College Park who used to serve on the Animal Welfare Committee, said overturning the ban would be long overdue.

Lachman held up two photographs of a pit bull named Bella, who she identified as a “foster failure,” meaning that her foster family became so attached to her that they adopted her themselves.

“She is gentle and loving to an extreme,” Lachman said of Bella. “I believe she is the rule, rather than the exception.”

District 1 councilman Fazlul Kabir proposed the council table the letter until Thursday, in case the committee has been working to revise the ordinance. Three of his colleagues agreed, including District 3 councilman Robert Day, who said that tabling the letter would allow the city to address that version of the bill after it had been discussed in committee.

In the end, only half of the eight council members were in favor of sending the letter. The other half thought the council should wait for the county committee’s Thursday meeting.

But Mayor Patrick Wojahn — the tie-breaker — said he thought the council should settle the issue that night and voted against tabling the letter. His decision pleased District 2 councilman P.J. Brennan, who said sending the letter would begin a dialogue that the city “shouldn’t be afraid of.”

“Doing nothing, I think, is so much easier than doing something,” he said.